Stephen Harper and the National Day of Humiliation 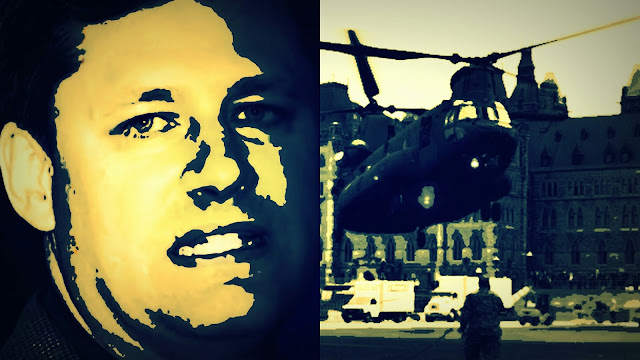 Well I'm happy to report that although Stephen Harper did manage to briefly enjoy one of his favourite fantasies.

By making it look like his military had finally brought down  Parliament.

His hopes that the National Day of Honour would honour him above all other Canadians, were cruelly smashed.

When he was forced to concede, at the very last minute, that the Governor General is the REAL commander-in-chief.

Prime Minister Stephen Harper will hand over a Canadian flag that has become a key Afghanistan war memento to the Governor-General, a last-minute change that comes after a veterans group said it was upset that the Prime Minister would receive the flag on behalf of Canadians.

The Prime Minister will now hand the flag to Governor-General David Johnston after he receives it.

Which was still a gross violation of military protocol.

But being publicly shamed into handing over the baton containing the flag must have been REALLY humiliating... 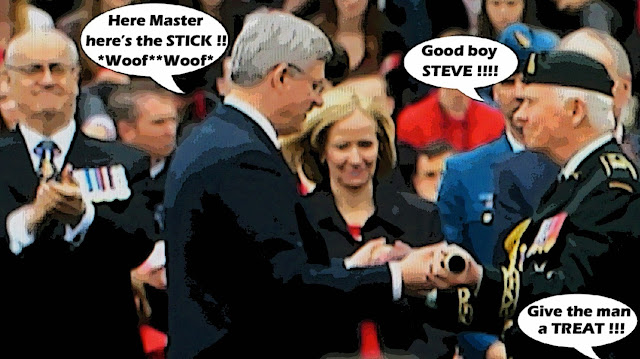 And I must admit I enjoyed that scene of total degradation almost as much as the Governor General.

I also noticed the looks on the faces of some of the veterans during Harper's long and boring speech. And let's put it this way eh?

I don't think they're going to vote for him.

And to make matters even worse for Great Warrior Leader, the news from the economic front was equally bleak.

Economists had anticipated an increase of at least 12,000 jobs for April, according to Thomson Reuters. Instead, April saw the biggest decline since December 2013, when the economy shed 44,000 jobs.

Which must have hit him like a shell from one of those howitzers... 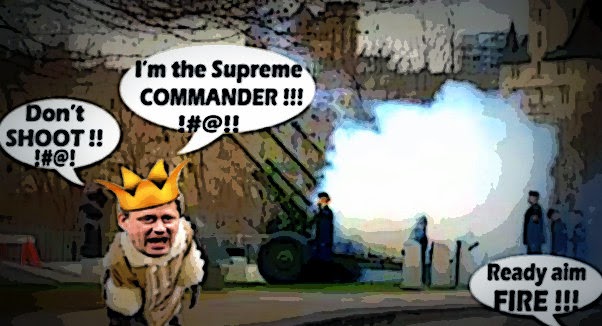 Coming as it does when he's putting out attack ads claiming Justin Trudeau can't run the economy... 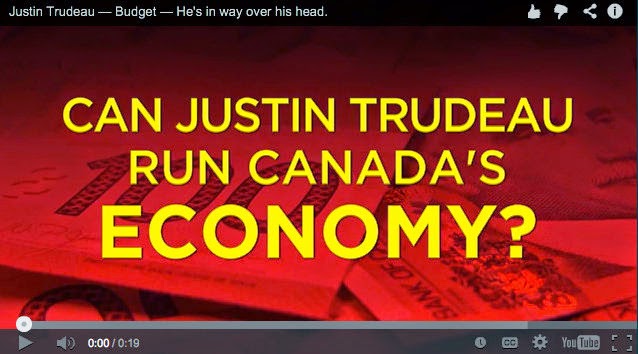 And at a time when Canadians are furious with him for flooding the country with foreign workers.

But then of course the important thing to remember is that he is desperate. He has until the fall to try to boost his polls or the pressure on him to quit could become unbearable.

From what I hear the PMO is in a frenzy, the young fanatics who run the office are making it up as they go along.

And Harper is now so paranoid or just plain deranged, all he can think about is screwing the Chief Justice, and he isn't listening to ANYONE.

From the highest court in the land to lowly public servants, scientists, statisticians and staffers, it’s a perilous business telling this prime minister something he doesn’t want to hear.

Moreover, we can’t say we weren’t warned. Harper’s signature line to last year’s big Conservative convention in Calgary, recall, was this memorable phrase: “I couldn’t care less what they say. We will do the right thing.”

Now he's only listening to the screaming voices in his head. So it's only a matter of time before even more Canadians start wondering whether he's mentally fit to remain in office.

Or whether he's losing his berries or his beanies. 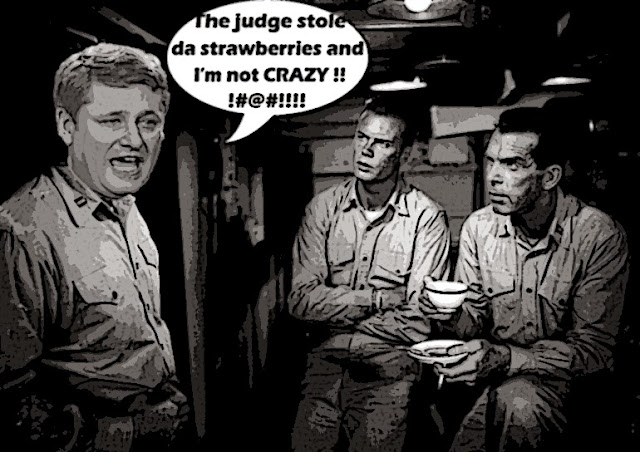 The Supreme Court has, of course, made several decisions that have gravely frustrated the Prime Minister of late. Anti-prostitution measures were struck down and Senate reform made functionally impossible, among others.

Disappointing as this must be for him, metaphorically hurling Beanie Babies at a respected and, it should be mentioned, Tory-appointed judge isn’t the answer. When this happens, Canadians lose faith in their institutions, the legal community loses its patience and you, sir, lose all your Beanie Babies.

And I wouldn't be at all surprised, if by the fall Great Warrior Leader realizes he's met his Waterloo.

Leaves the battlefield bruised and humiliated.

In a straitjacket or in handcuffs.

And goes back to where he came from... 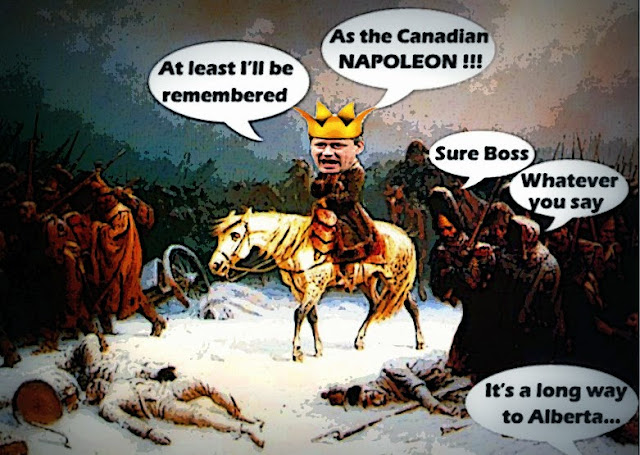 Leaves the battlefield bruised and humiliated.

Wrong. harpie is like the deranged husband who shoots his wife in the head and kills her to stop her from leaving him. he would rather see Canada in ashes than lose control of it. Cornered, wounded animals are the most dangerous and he has never been more dangerous to us than he is now, Simon.

I guess kijiji must have been down when they were trying to fudge their latest job numbers..

Retired Supreme Court Judge John Gomery: "I'm puzzled as to the motivation of the Prime Minister and his office as to why they would take on the Chief Justice who is surely beyond reproach and somebody who should be free of the kinds of debates in the House of Commons that we've seen, and I find it very distasteful. I find it harming to the constitution of the country, and I find it bewildering as to what possibly could be motivating the Prime Minister."

If more Canadians regularly watched Question Period, even the first 10 minutes, the Cons would lose the 2015 election by a landslide.

Stalin, Hitler and Mussolini were all dictators and control freaks as well. They too refused to step down while their countries, were being turned into vast piles of rubble. Dictators are sociopaths and are only able, to care about themselves. Dictators are, paranoid, arrogant, very vindictive and stubborn.

I agree with Anonymous 7:38. Harper and his vile tyranny, will escalate. Harper's behavior is becoming, more and more bizarre by the day.

hi anon...I agree with you that Stephen Harper has never been as dangerous as he is now. And you may be right, he is the kind of man who would take down the country with him. But at least twice in his ignoble career he has suddenly cracked and given up. Once when he worked for Preston Manning, and once during the height of the coalition when he had to be persuaded not to resign. So it could happen again, especially if the party gives up on him. But yes, I think we both agree that it will get worse before it gets better....

hi anon...Not only was Kijiji apparently unavailable, there is a big debate out there as to whether we can even trust the figures they did come up with. For so gutted is Stats Canada that some economists believe the real unemployment rate could be twice as high as the Cons claim. It's quite an achievement isn't it? The Con regime not just evil but incompetent...

hi David...yes it's quite ironic isn't it? John Gomery who like Sheila Fraser played such a big role in defeating the Liberals, now just another name on the Con Enemy List. And dare I say, just another nail in their ghastly coffin....

hi anon...yes, Harper's behaviour is becoming more bizarre as he grows ever more desperate. But the good news is he is doing himself great damage. You only have to read the comments in the papers to see that more and more Canadians are growing tired of the Con freak show. And sooner or later all that outrage will destroy him...

You are seriously deluded and deranged.

Yes, I'd agree Harper is deluded and deranged. Simon is bang on about Harper and his henchmen. This country is going to hell in a hand basket. More and more temporary foreign workers coming into Canada, while youth unemployment is at an all time high. Harper attacking the Supreme Court justice. Then you just have to have a read of his "friend's" book. He thinks he is leader of life of Canada. The guy's a joke.


He won't hold a commission into the 1,200 murdered/missing First Nation's women in Canada but wants to send technology to Nigeria to find missing school girls. Hello Stevie, they have already been sold.
The RCMP still haven't been able to figure out who has been murdering women on the B.C. Highway of Tears for the past 30 yrs, so what will Canada have to offer Nigeria? Time to give it up stevie. time to go home and let someone with a full deck and an understanding of life for Canadians works or in most cases doesn't work.