Stephen Harper and the Day of Disappointment 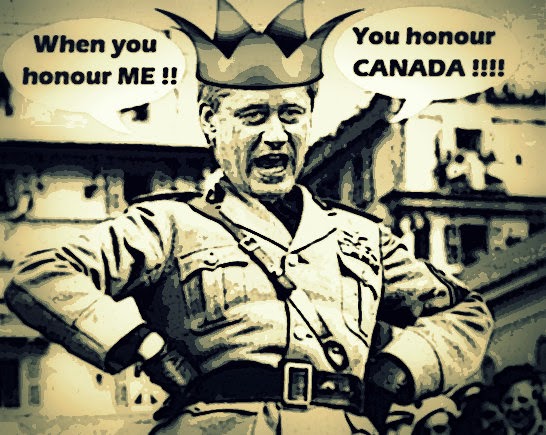 Well today is the National Day of Honour. The day Stephen Harper proclaimed should honour all those who served in Afghanistan.

But as I explained the other night, is an unseemly debacle mainly intended to honour HIMSELF.

Even if that means elbowing the Governor General out of the way, and posing as the commander-in-chief.

The head of Canada’s largest veterans’ organization is upset that the Prime Minister, not the Governor-General, will be presented with a Canadian flag that has become a key Afghanistan war memento during ceremonies to commemorate the 12-year military engagement.

Mr. Moore said the flag should be accepted by Governor-General David Johnston as Canada’s commander-in-chief.

Which is as close to a coup as you can get in this country, and will certainly look like one:

The Conservative government is also staging a display of military might on Parliament Hill, including a Leopard tank, 16 armoured vehicles, and the type of artillery gun that soldiers used to shell Taliban targets in Afghanistan. Military transports, patrol aircraft and helicopters will fly over the Hill.

And I could go on about what kind of leader would do that, and what kind of country we are living in. But I said what I wanted to say the other night.

So today I just want to bring you the stories of two families who lost a son in Afghanistan.

The father who is still mourning six years after his son was killed. 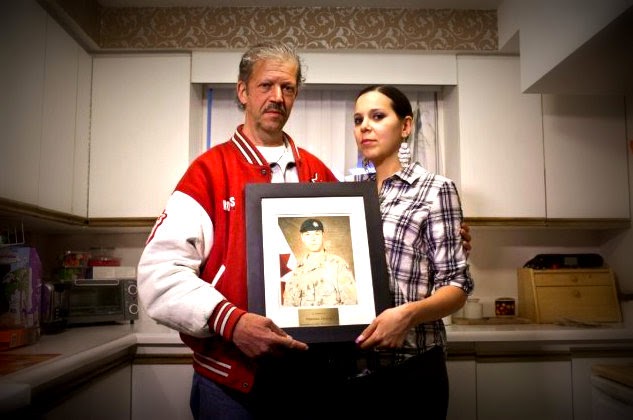 It is difficult but, on this day, Jerry wants to talk about his son, he wants to keep his memory alive and believes all of the 158 Canadian Armed Forces personnel killed in Afghanistan must never be forgotten.

But he asks if we can meet at the home of Martha, one of his two daughters. Jerry, 59, says because of his depression, his house isn’t in condition to have guests.

And the equally tragic story of this Canadian couple who lost their son only to be treated in a most miserable manner by the government and the military... 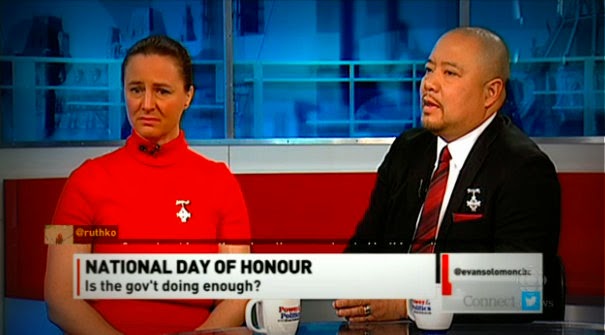 For whom this Day of Honour is also a Day of Disappointment...

And after you've watched that video, and seen that mother weep, maybe you'll ask yourselves the same questions I do all the time:

Is this still Canada?

And is THIS a Canadian leader? 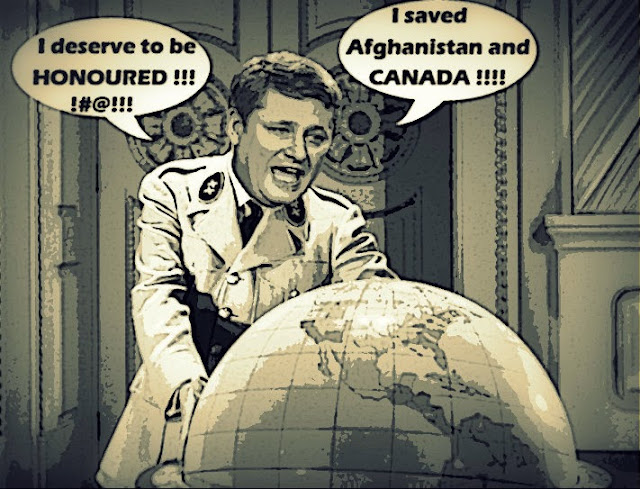 And then since the answers are clearly NO and NO, hopefully all decent Canadians will now do what they must.

Honour the dead, help the suffering.

Defeat those ghastly Cons and their depraved leader.

And take our country back...

The better question is to ask what the fuck Canada sent our boys to Afghanistan for in the first place.
The "Phoney War On Terror" (P.W.O.T. for short - see "Ranger Against War" on the intertubes) did nothing to make Canada more secure, had no positive effect on any thing anywhere other than to suck up to the amerikans and line the pockets of arms manufacturers with billions of our tax dollars not to mention making it very dangerous to wear the Maple Leaf on your clothing in many parts of the world FOR THE FIRST TIME IN OUR HISTORY AS A COUNTRY just like the amerikans have been dealing with for decades now because of the excellent recruiting campaigns for jihadists they/we have run in Afghanistan and other places around the world under the phoney guise of "democracy" and "patriotism" when all it really amounts to is fascism and nazi-onalism. This was all played out just over 70 years ago by a wallpaper hanger from Austria and his "patriotic" advisers. Yes. I'm saying that 158 Canadian lives were wasted for no good fucking reason! You want to honor the fallen in Afghanistan? Drag that malignant narcissist out of his house on Sussex Drive and into the streets, tar and feather him and deport him to Afghanistan! Let them deal with him! He deserves every single thing they will ever do to him and send his cronies there for good measure! That would be the patriotic thing to do today to honor the wasted lives this conscienseless bastard and his flying monkeys have cost this country and their grieving mothers, fathers, siblings, children, etc.
God Bless Canada! God damn every con who supports harpie and his godless crime cabal and if there is a devil, I'm sure he is waiting insanely impatiently when he can get his hands on oilcan stevie and serve him up the just desserts of his tenure on this earth!

This whole event is a travesty. It's not the biggest injury, but harper's inability to see that a corporate-sponsored day of honour trivializes what he's attempting to do, is a pretty good symbol for the man's hollow core.

It just occurred to me: harper made a point of re-inserting "Royal" into the name of the Canadian Forces. But then he elbows aside the Crown's representative to receive the flag as if this is a republic. I don't really care, but, again, it just goes to show you how harper has no idea what he values or why.

As for the GG, if he had any pride, he would show his disgust and resign at the PM co-opting his role. However, I would be surprised if that happened. This GG was apparently appointed by Harper as a reward for his role in crippling the Mulroney-Schreiber public inquiry. The latter cost the public $15M and yet Johnston wrote the mandate to disallow it from addressing the central issue of kickbacks in regard to the Airbus purchases. Mulroney himself had publicly lamented this point as robbing himself the opportunity to clear his name, or at least to address the allegations that had rocked the country for decades.

Apparently Sleazy Stevie appears to have backed down and the GG will fulfill his role after all.

hi Mahmoud...Look I wrote about how useless I thought the war in Afghanistan was, and how it was a mistake from beginning to end, and a tragedy for all concerned. But I also said that the road to hell was paved with good intentions,so I don't mind honouring the ordinary soldiers who served there, or more importantly recognizing the suffering of their families. I only hope we have learned our lesson, and will not be dragged into that kind of useless war again...

hi thwap...you're absolutely right. it is a travesty. And one that was thrown together in a desperate attempt to buff Stephen Harper's image, try to repair his image with veterans, and distract us from all his government's scandals.And good point about the Royal fandango. The great royalist insults the Queen's representative, how absurd and pathetic can he get?

hi anon...the mother answers your question in the video. She says the main reason she attended was so she could meet the other parents, who she has corresponded with but never actually met. I did hope that some veterans would turn their back on harper or boo him loudly. But as long as they vote against him in the next election, I'll be more than satisfied...

his Steve...yes as I've said before, the mask is slipping,the phony myth is melting,and Great Leader is finally revealed for all to see as a very little man....

hi kootcoot...yes I saw that, and you better believe that being publicly shamed into backing down was really really embarrassing....

One sad fact that is not getting enough attention in the media: Today there are less mental health professionals helping Canada's vets and their families, than there were 12 years ago when the first contingents of Canadian troops arrived in Afghanistan in January–February 2002.