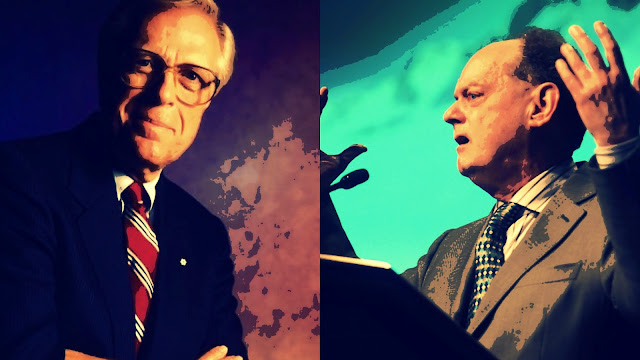 On a day when the country is mourning the CBC icon and distinguished Canadian Knowlton Nash.

At a time when the CBC is bleeding to death from the savage cuts imposed by the brutish un-Canadian Harper regime.

And some of its most admired journalists are taking early retirement, to try to protect the jobs of some of their younger colleagues. All honour to them.

I only have one question: will the CBC now also do the honourable thing and finally fire Rex Murphy? 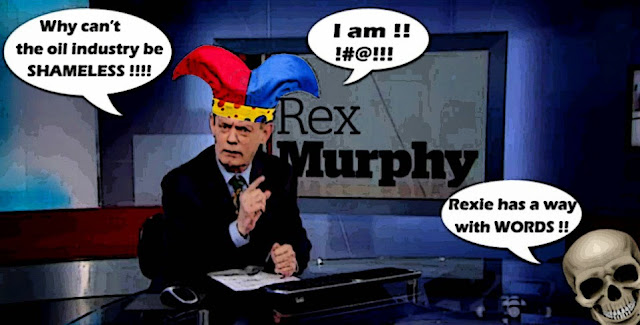 Because anyone, who knows ANYTHING about Knowlton Nash, knows that he must have despised the very idea of having a loudmouth partisan tea bagger like Murphy contaminating the journalistic integrity of his beloved National.

He would have been shocked to see how easily the CBC's hapless mollusc managers let that shabby right-wing demagogue off the hook. 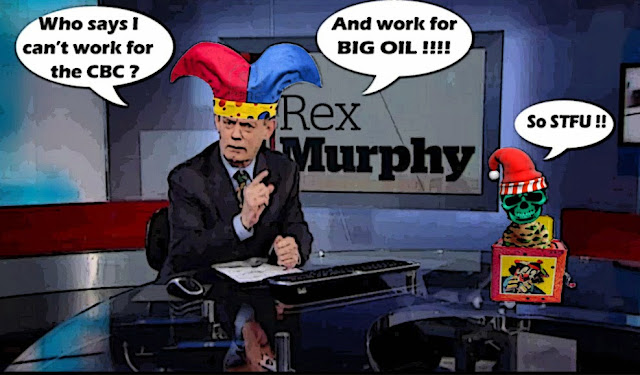 We were disappointed some people were willing to believe that someone the calibre of Peter Mansbridge would sacrifice his professional integrity, or that Rex Murphy's opinion is for sale.

When what he's doing is clearly a violation of the most basic journalistic ethics, which dictate that even the perception of bias must be avoided.

Nash would have been disgusted to see that despite so many complaints from the public, Murphy is STILL shilling for Big Oil.

Now as part of a massive new propaganda offensive I wrote about the other night. Which is designed to pave the way for the construction of the Northern Gateway pipeline.

And Nash no doubt would have asked the CBC managers this question: if Murphy is not subject to basic journalistic ethics, on the network's flagship NEWS program, because he's an "independent contractor."

When it came to freelancers such as Rex Murphy, we were of necessity more hands off. They are independent contractors, not employees.

Why would they lay off ONE regular employee before laying HIM off ?

When quite apart from the damage he's doing to the CBC's reputation, Murphy has many other jobs, lives in the most expensive condo on the Toronto waterfront. In the same building in my neighbourhood where Mike Harris lived in when he was Premier.

And he's got powerful friends with benefits and BIG BUCKS.... 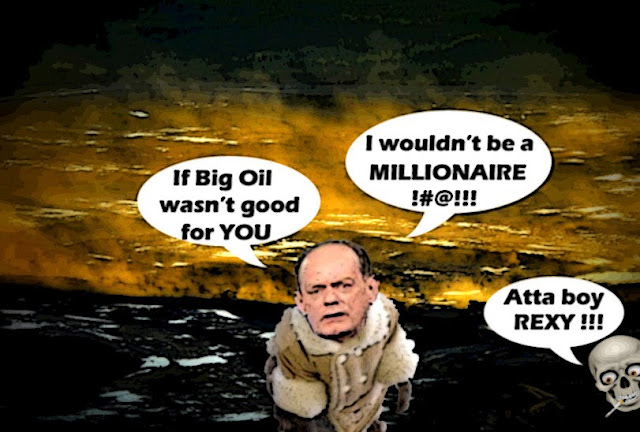 While the CBC's younger not so well off employees face great hardship and a bleak future, in an almost nonexistent job market.

Oh boy. Poor decent Knowlton Nash must have wondered at the end of his life, what has happened to his beloved CBC, and to the country he served so well.

But at least he was spared, as I unfortunately wasn't, the grotesque spectacle of the ghastly Smurphy on The National tonight.

Looking like he was half looped or had just fallen out of bed... 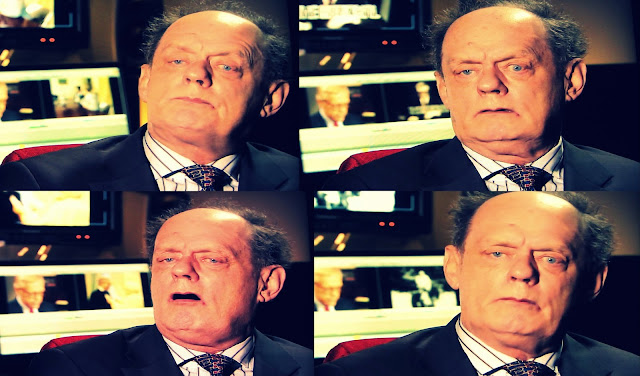 Because that would have been the final indignity eh?

Along with the CBC's shabby coverage of his death, which only shows how far it has fallen.

As for the CBC News tradition that Nash so ably represented, that too has declined horribly. In fact it is lamentable to note that CBC TV’s own coverage of Nash’s death on Saturday was shabby, shoddy and so poorly done. On The National, anchor Kim Brunhuber struggled to suggest a narrative to Nash’s career as a repetitive series of footage of Nash, on The National, reporting from Vietnam Washington and Cuba, repeated endlessly and all the while Peter Mansbridge nattered away, affectionately, but mindlessly, on the phone.

And this terse statement.

“Mr. Nash’s remarkable legacy includes the rich historical news archives he leaves behind, the many books he authored and the many journalists he helped to train. The nation mourns the loss of this iconic journalist.”

From the man who is slowly killing the CBC, and despises everything Knowlton Nash was and believed in. His quiet decency, his support for public broadcasting, his noble vision of Canada.

And is of course Rexy's oily soulmate... 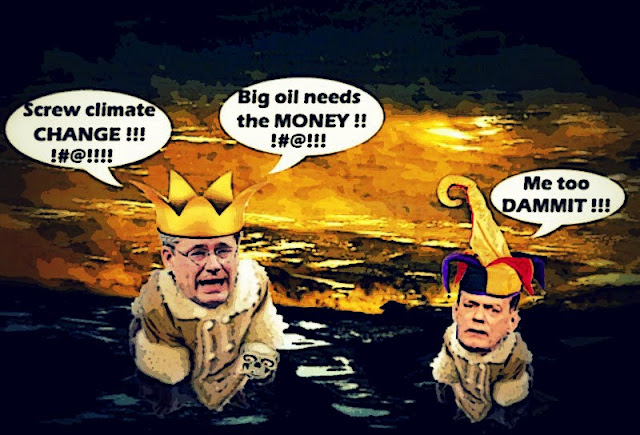 Or his grubby puppet master.

And all I can say is, if we want to honour the memory of the good Knowlton who served his country with class and dignity, I can think of at least three ways to do that:

We must do all we can to save the CBC, from the Cons and itself.

We must fire Stephen Harper and his ghastly un-Canadian regime.

And the CBC's useless managers must fire Rex Murphy... 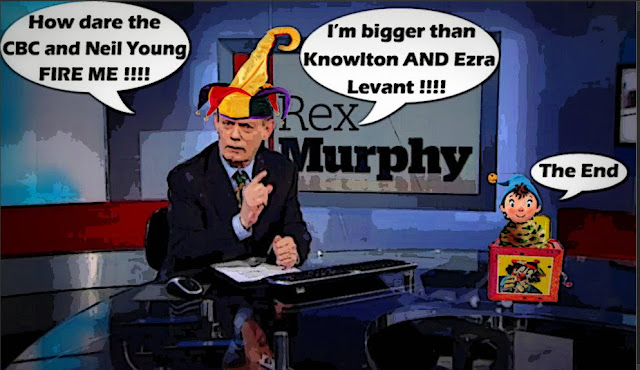 While they are at it they can fire liberal bootlickers Peter Mansbridge and Terry Malsewski as well. And unprofessional Evan Solomon.

Oh, I wish. I have not listened to Cross Country Checkup since he took over. I miss it.

yep, rex murphy is an atrocious cbc rep, I dont want to call him a journalist, or a writer, as really he is a paid spin doctor who has been allowed access to TV. Let him go work for Sun News where he belongs:P

Rex Murphy would not make the grade on Rush Limbaugh TV

It seems, Simon, by all of the indicators, that the CBC is almost beyond salvage, something that has been the neocon plan all along, of course. I listened to The Current recently as it discussed the future of the CBC, and old Gerry Nichols had a prominent spot in the discussion. His 'solution'? Privatize, and let the marketplace decide content and viability.

With so many barbarians having breached the gate, I see little reason for hope.

hi Ryan....well I see you have an Enemy List almost as long as mine, although we are both still way behind Great Leader. Seriously though, I'm not a CBC basher. I believe in the role of that beleaguered cultural institution even if it sometimes disappoints me. But they are in a difficult position, they are dependent on the Cons who hate them with a passion, and in trying to appear neutral I feel they sometimes tilt too far to the right. The way they hyped the Mulcair inquisition is a good example. But the only ones I'd really like to see whizzed are Rex Murphy and Kevin O'Leary. They MUST go....

hi anon...I must confess I haven't ever listened to Cross Country Checkup. But I hear that Murphy is far more subdued on that program and at least on that program somebody gets to talk back to him, unlike the National where he can say what he wants and never gets challenged. But yeah I wish he would go, and I wish he would move out of my neighbourhood, so I don't have to go to extraordinary lengths to avoid him... ;)

hi deb...I think Sun News would be a very good place for him. He could say what he wants, dress like Don Cherry, or wear some of my fine buffoon hats, and all of that channel's two hundred viewers would love him almost as much as they love Ezra Levant. I was very moved to see how some of the CBC's older reporters are retiring before their time to try to save the jobs of younger workers. And if Murphy did quit the CBC his salary alone could save about thirty jobs...

hi Steve...now don't be unfair, I'm sure our Rexy would be SENSATIONAL if he took the samde drugs Limbaugh does. I know I'd watch it...;)

hi e.a.f.....actually I was watching Cherry the other night, something I never do during the regular season, and I'm afraid he's losing it too. At one point because they didn't have time for him to tell a soldier story, he was so annoyed he just stopped talking !!! So we were left with these unexplained shots of the junior hockey final, and Don McLean with a panicked look on his face trying to get him to say something ANYTHING. Yup, he may dress better than Rex but they're both good to go...

hi Lorne...I agree that the CBC had made some horrible decisions in recent years, and many good programs have been badly affected. But that's the fault of their dimwit managers, who are so afraid of being branded as left-wing elitists, that they bend backwards to pander to the right, only to end up offending everybody, and looking ridiculous. But there are still some pretty good programs and journalists in that place. Remember they were the ones who broke the TFW scandal, which is doing enormous damage to the Cons. And there are also some really good young journalists, editors, and online people. So I am not as pessimistic as you are. If they are a little more assertive, and they do a really good job covering the robocall trial, the Senate scandals, and the next election campaign they can still redeem themselves in my eyes. So that absurd old Con Gerry Nichols can take his privatization idea and shove it you know where... :)

I think spinny here is on the wrong blog. Typically a C.R.A.P. believer

He likely is a spin doctor for fox news

yes indeed, but Rex is a shameless attn whore who would never think of anyone but himself. Im sure that if he did end up on sunnews him and ezra would pull each others hair out trying to outdo themselves on who is the better climate change denier, they both make me puke. I would love to slap them silly or throw tomatoes at them during a live broadcast:)

one more thing on the Rexster....the only thing I do like about him, is that he was the inspiration for Max Pointy. That character on this hour has 22 minutes makes me pee my pants, its soo funny. To be honest Max Pointy has more intellect and more charisma then the character he is derived from:)

hi deb...I'm afraid I don't watch much TV so I've never seen Max Pointy, but after googling his name I must say he sounds like a character I could really enjoy, and I must see if I can get hold of some video... ;)