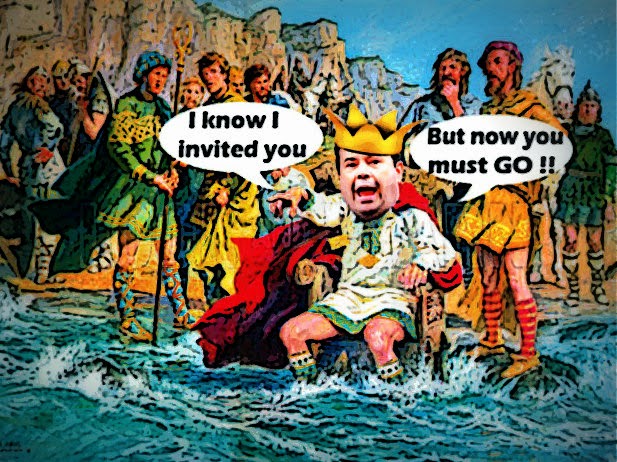 Well I see that Jason Kenney has been reduced to playing King Canute.

Frantically trying to hold back the rising tide of foreign workers flooding into Canada.

Trying to make it look like he's The Solution, not the guy who created the problem.

In the next few weeks, the government will try to painkill away its worst policy migraine. Sources say Employment Minister Jason Kenney will unleash a renamed temporary foreign workers program with two conflicting objectives.

He'll aim to preserve the part of the program which red-carpets skilled technical or executive talent which cannot be easily found in Canada. And he will lay down a bed of nails to discourage unskilled workers from entering Canada as indentured servants.

But of course it won't work. There are just too many foreign workers in Canada.Too many Canadian businesses are addicted to them.... 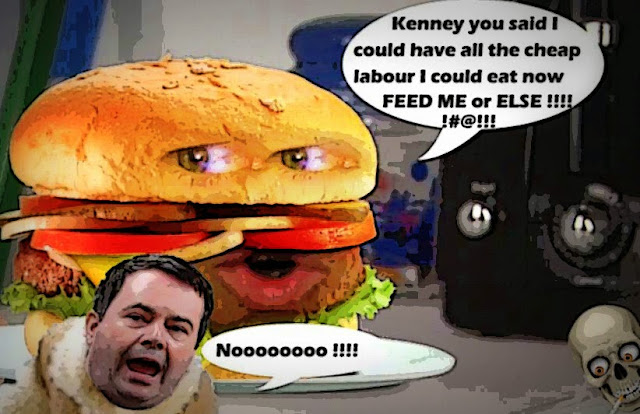 Kenney created the monster, and now it's after him. Because now it doesn't just want cheap labour, it wants SLAVES.

The B.C. Human Rights Tribunal has ruled the operators of a tree-planting business discriminated against African workers and has ordered the employer to pay more than $600,000 in damages. Tribunal member Norman Trerise says in his 114-page ruling that the owners of Khaira Enterprises Ltd. taunted and harassed the 55 workers with racial slurs and had a blatant disregard for employment standards.

The tree planters worked in a camp in Golden, in southeast B.C., in 2010, until it was shut down by the provincial Ministry of Forests, when the planters complained to ministry staff that they hadn’t had anything to eat for two days.

Because that's how low we have fallen.

And Kenney's plan to allow skilled workers to continue to flood into Canada won't work either. Not after his claims that there is a skills shortage in this country were shown to be fraudulent.

It took nine months of detective work by economists, journalists, social media sleuths and investigators at the Parliamentary Budget Office to solve the mystery of Canada’s missing job vacancies. Last week Auditor General Mike Ferguson made it official: The federal government was using unreliable statistics to support its claim that Canada had plenty of jobs but no workers with the skills to fill them.

Because as you know Kenney and his Con clowns were getting their numbers from Kijiji... 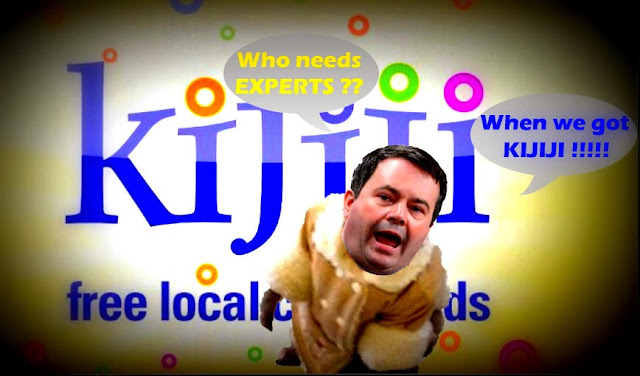 And the sad truth is there are just not enough jobs, and too many permanently unemployed.

Almost four out of 10 Canadians who don't have a job have completely given up hope of ever finding one, a new survey suggests.

Too many Canadians looking for jobs the Cons never bothered to create, except in their beloved Alberta.

Too many slowly losing hope...

I know, I see it in the eyes of too many of my friends and other young Canadians, and it makes me so angry. Because I see what the Cons and our grotesque business class are trying to do them. Humiliate them, break them, make them feel helpless, so they too can be SLAVES.

And I know that one day their anger will shake this country to its foundations.

And it will help destroy the Cons in the next election.

For NOTHING will hold back that rising tide.

And it will drown them ALL... 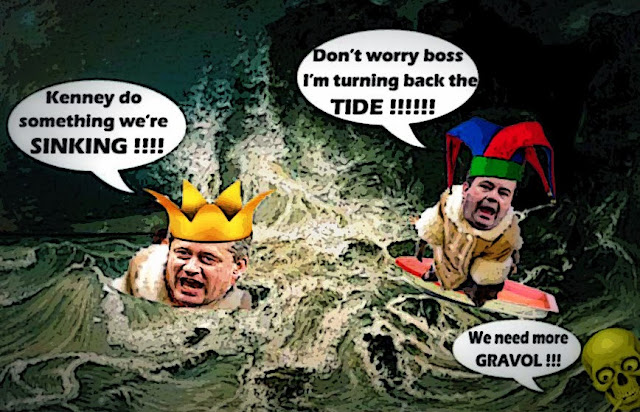 .. Talk is Cheap .. and that's one of the skills Harper, Kenney, Oliver, McKay, Fantino, Shea, Clement, Baird excel at. Talk. Cheap, Glib, Greasy TALK.. with lots of SpokesWanks to help deliver the TALK.

Pronouncements are another highly prized skill those same cheap political thugs excel at, whether spewed directly or via a salaried SpokesCrank late on a Friday afternoon or during the weekend. You know.. the tired old 'our values are your values' sermon.. or the 'we are the family values party' .. please send lots of money quickly

Paramountcy will be the next freaky Pronouncement from the Stevie Ray TwinPack on Sussex that spewed Prorogues at Stunned Canadians & Kenney Oliver Gerstein Byrne Hamilton will bray support for Assimilation, Submission and Supplication of the Royal Harper Perogatives and Proclamations.

How the Harper MP's and Ministers can stand to see themselves in the mirror every morning, without vomiting is one of the great psychological wonders of modern times. The Wretches for Harper,, hacks, hags & stupidos.. certain never to be recognized as Canadians

Our local paper, The Comox Valley Record, ran a large article about how good the foreign worker program was. How it helped local employers who couldn't find Canadians to do their field work at a winery. Its strange because a large local farm has always had local workers each year. Its how many young people put themselves through school. Perhaps, its about how workers are treated by their employers. It isn't always about the money, although that helps.

TFW earning 78 cents an hour in BC. The employer cost of housing can be recovered, through payroll deductions.
May 22/2014
blogborgcollective.blogspot.ca

Harper's corporations are, bottomless pits of greed. They demand cheap labor and Harper brings over cheap foreign labor, for corporations to exploit.

Harper is your typical Fascist Dictator. He is a sociopath and is only capable of loving himself. All dictators are control freaks and Harper's henchmen follow to the letter, of Herr Harper's orders. They are all of Harper's Borg and have been assimilated. They have no minds of their own.

What makes me crazy, Simon, is that young people are enormously affected by the whole foreign worrker charade, yet they are the ones that don't vote...they all seem to hate unions, yet they wonder why their Mcjobs suck so much (when they can find them)...
I don't know how to get to the young, guess I'm just too old..I have meaningless 'discussions' sometimes trying to explain why voting is so important, and I always point out that their plight is a direct result of apathy..when less than 40% of voters control majority status, there's something blatantly wrong..yet, how does anyone convince them that apathy, sitting on the fence, is tantamount to getting a nice splintery white picket right up the bum...?

hi salamander...at this point I believe the Con regime is more like a cult than a political organization. From what I hear since the Soudas fiasco Stephen Harper is even more paranoid and convinced he can trust anyone, except of course for the brown nosers in the PMO like the faithful Ray Novak. But Novak is no political genius, and with nobody to restrain him Harper is slowly sliding out of control. So it may not be pretty but this horror show should have a happy ending...

hi e.a.f...if it was only farm workers like it has been for a long time I don't think Canadians would mind. But unfortunately for Kenney he has hooked many small businesses into depending on cheap labour, so now he's caught between a rock and a hard place. Which is why I am more and more convinced that this is the issue that will in the end do him the most damage...

hi anon...yes unfortunately our business class is both unimaginative, and horribly greedy. They have created too many business models that depend on cheap labour, and now they are going to pay for it big time...

hi mizdarlin...it's true that young people haven't done their civic duty in the past, but that doesn't mean that they won't turn out to vote next time. Me and my friends are almost entirely dedicated to that mission and I'll have more to report on that soon. However, I should also add that I am also working on messages to reach seniors, the ones who vote for the Cons all the time. If the young are to be shamed into action, seniors must also take their share of the blame for helping keep the Cons in power. Since I work with the young and the old that may be my undoing. So if I disappear please carry on my mission... ;)