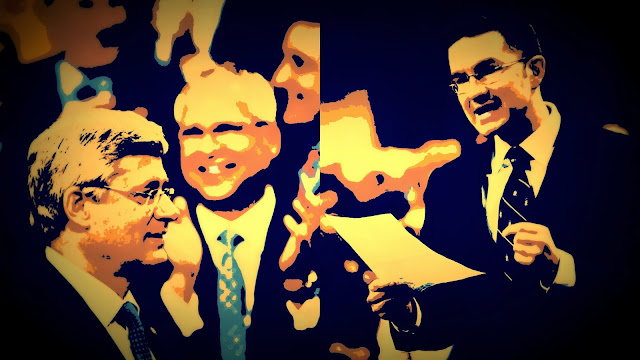 You should have seen Stephen Harper this evening in the House of Commons, beaming like a proud father, and clapping wildly, as his Reform boy Pierre Poilievre stood up to vote.

On his Day of Disgrace.

And his equally excited Con sheep bleated their approval of the so-called Fair Elections Act.

On their Day of Shame.

The Conservative government’s divisive Fair Elections Act passed third reading in the House on Tuesday evening by a vote of 146 to 123. It will now be sent to the Senate, where a quick approval is expected. The government hopes to make it law by June.

A bill which thanks to public pressure is slightly better than the original version, but still hideously flawed.

Critics have warned its effect could disenfranchise some voters, reduce voter turnout and tilt the electoral playing field in favour of the Conservatives.

And the way the Cons rushed it through Parliament was a grotesque travesty of democracy. Worthy only of a grubby Banana Republic.

As Great Pimp Pimply Leader HIMSELF once declared... 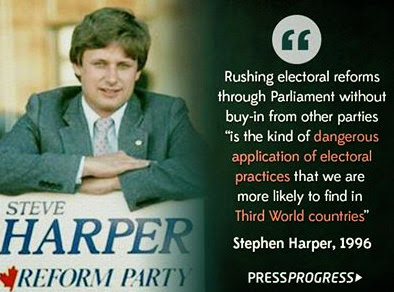 Welcome to the Third World.

Or Poilievre's World. Where making a mockery out of the democratic process, insulting the Chief Electoral Officer, and acting like a totalitarian jackass, means never having to say you're sorry.

Mr. Poilievre offered no contrition Tuesday when asked if he had any regrets about the process. “I’m very happy with how it went about,” he said.

But then why should he be sorry? When he has no shame, and he knows that Stephen Harper likes his Cons that way.

Ruthless bully stooges as fanatical and as warped as he is... 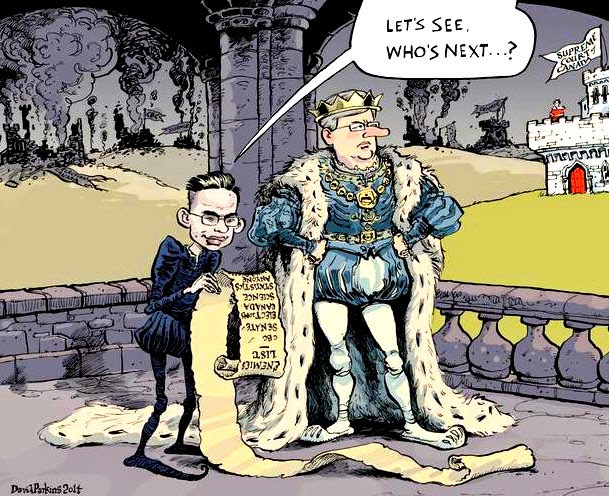 Who he can unleash on his enemies to fire up his rabid base.

By identifying enemies or hostile institutions, or by picking fights with individuals or institutions, Mr. Harper can better galvanize his supporters. The idea of appealing to as many people as possible in the search for maximizing votes is not how he governs. Instead, he looks to his party’s core vote, tries to energize it as often as possible, then finds slices of the electorate to add to the core.

Because in Harper's World, ANYTHING is possible. He corrupts EVERYONE. His bill is an ABOMINATION. And this IS a Banana Republic.

But here's the good news. That foul bill will come back to haunt him and Poilievre... 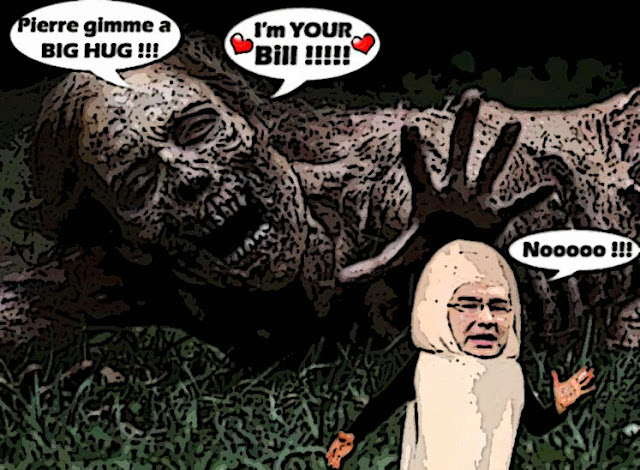 Because in defence of their indefensible bill the Con bullies attacked a lot of decent and distinguished Canadians. But they did not back down.

It was 99 days that saw a government introduce a bill that would suppress voter turnout and dress it up with a name that evoked images of lollipops and puppy dogs, then wave some non-controversial shiny parts of the bill and hope no one really took a harder look.

For the first time in a long time a lot of Canadians came out to defend their democracy... 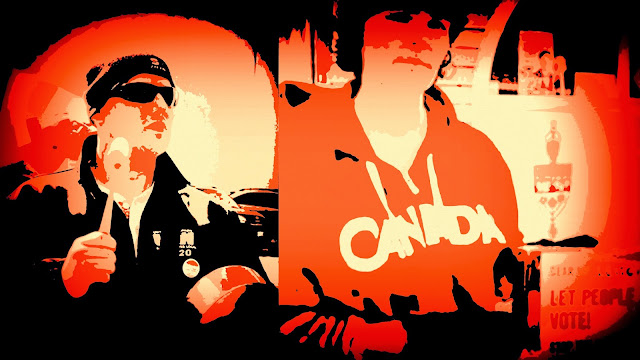 That struggle will continue all the way to the next election. And that issue WILL hurt the Cons.

Because although far too many Canadians are still too indifferent about the state of their democracy, they will understand simple messages like this one... 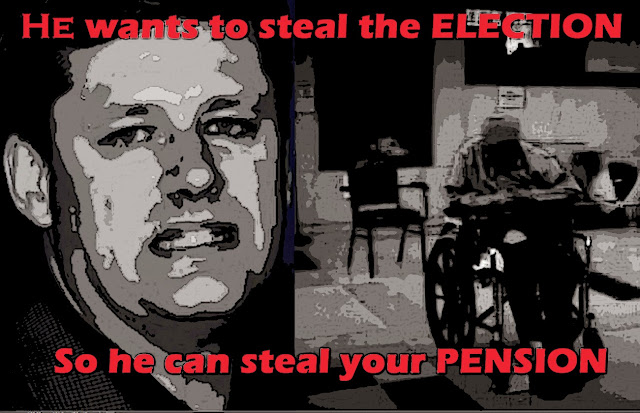 And we will use the Unfair Elections Act to cast a shadow over everything the Cons do, and make them look not just diseased, but DANGEROUS.

Lastly, but not leastly, Stephen Harper's frenzied assault on our democracy might finally make the MSM understand the true nature of Great Leader.

Realize that there really is something terribly wrong with him, that he really would turn us into a JUNGLE.

And that as in every jungle.

Indecision can be FATAL...

You know, I have to admit that at this stage in the history of our country, Nature couldn't cull enough of the dumb. Or those who still can't recognize a monster when they see one.

But we won't make the same mistake.

We have seen the enemy, and we know it's a would be DICTATOR.

We shall defend our democracy.

And we shall use it to bring him down... 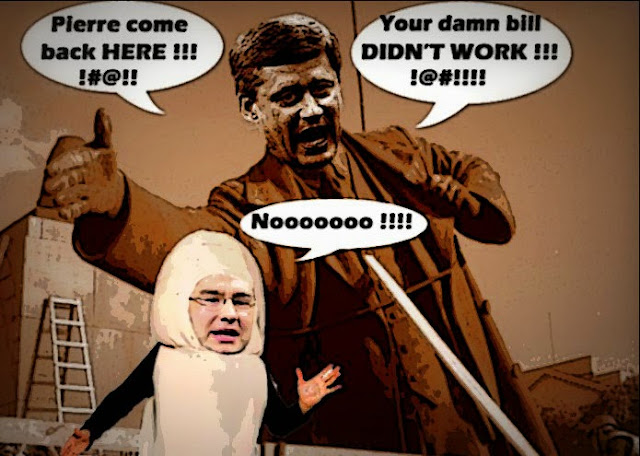 Either that, or we wait like chumps until 2015 to vote in a rigged game that gives the harpercons another stolen majority, whereupon we do nothing.

I had long given up on the Con sheep which is why I have been following the voting patterns of the one Con MP that many claim is the single paragon of Con democracy: MP Michael Chong. With all 146 Con MPs voting to pass this bill, I would presume that Chong, unless he was absent, also voted with his party to pass it. Does anyone know if he was indeed absent?

Further to my comment above (Anon 9.33 am), I have the answer to my own question. Chong was indeed present and voted with his party: http://www.parl.gc.ca/HouseChamberBusiness/ChamberVoteDetail.aspx?FltrParl=41&FltrSes=2&Vote=139&Language=E&Mode=1. Interestingly, James Rajotte, who is also sometimes mentioned as one of the more reasonable Con, also voted with his party to passt the Elections Act.

Taken together with the fact that Chong had voted for the multiple omnibus bills that Flaherty and Harper had rammed through Parliament, the evidence does not support the contention that Chong is not also a Con sheep. As far as his voting pattern goes, the evidence seem to suggest that Chong too is one of the sheep. Thus claims that he is reform/democratic minded is likely undeserving.

Harper is a fascist dictator from way back. You think Chong and Harper's other henchmen, are true Canadians? They are not, they are the dregs of Canada. These are the sort of people of whom, Hitler had working for him too. Harper's list of degenerates is as long as his arm.

Harper is a very evil monster. You can't believe anything Harper's vile cabal say, not even Chong. However, Canadians are complacent and will accept this atrocity too. Harper rules by fear and Harper's henchmen are terrified of Harper. I quite believe, Harper threatens his cabal.

Once Harper gains control of the Supreme Court? Harper will have Canada as his, Thousand Year Fourth Reich.

There are no cons that vote against the fuhrer's wishes or else they are excommunicated and banished to the 9th level of political hell for eternity.
It's that simple!

Agreed! They are ALL simply bobble-headed sycophants, doing the fuhrer's bidding - altho, out here in BC, we tend to call them BOOTLICKERS - very similar in thought and action as that American base, called "The Kochsuckers".

Harper and the Cons are scary. How far would they go if they could get away with it?

This is what I expect to happen. Voter turnout sets record lows year after year, and now with voter suppression and election rigging perfectly legal, people will be even less inclined to vote as they will further feel that voting is useless.
All going according to Harper's plan.

We have only seen the tip of the iceberg. Now that they have enshrined suppression and fraud, the true depravity will appear.