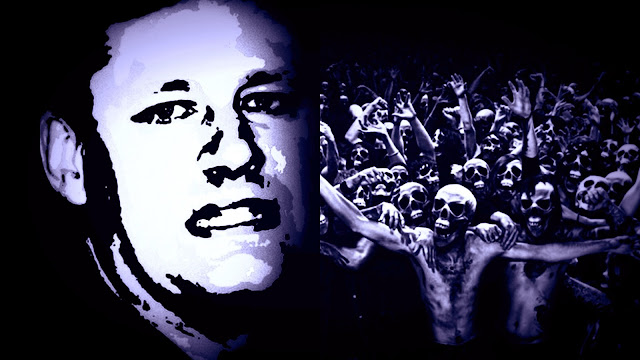 It's a deeply disturbing image. Stephen Harper in his bunker surrounded by his shrinking inner circle.

The only ones he still trusts after having disposed of all his enemies, real or imagined.

And nobody able to rein him in, because as I've warned before, this is a PMO like no other. 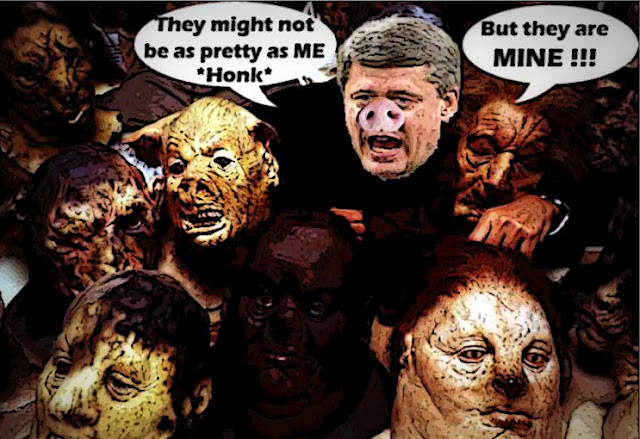 Harper's inner circle is shrinking, not in terms of size, but in age, life experience and links to the professions, some critical observers say.

Harper's habit of not just distancing himself from once close people who have displeased him, but outright banishing them, has led to an increasing isolation, some observers feel, forcing a reliance on hyper-partisans.

A collection of young fanatics the Cons themselves call the "boys in the short pants."

Keith Beardsley, a former adviser to Harper, first coined the phrase "boys in short pants" to describe what he says are young staffers in the PMO who have a habit of "bossing around MPs of 20 years' experience and telling them how to do politics."

A cult-like group of sinister operatives who believe, like their Great Leader, that the end justifies the means, and far from restraining him, they are his cheerleaders.

Beardsley, a former high school teacher and Montreal city councillor who left the Prime Minister's Office in 2008, doubts current staffers get into yelling matches with Harper "because of the youth, the intense partisanship." He added, "He can be an intimidating guy when he gets going. These are the rah-rah troops." 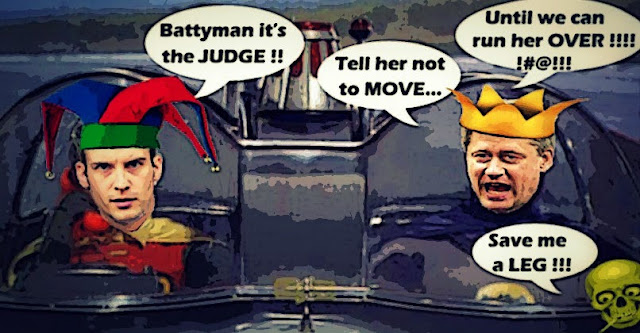 His current right hand is 37-year-old Ray Novak, so close to Harper he once lived above the garage at Stornoway when Harper was Opposition leader, and was treated as a family member.

Or his deputy chief of staff Jenni Byrne...

Jenni Bryne, the same age as Novak, is a co-deputy chief of staff, and painted by Flanagan as "a warrior who would walk through a wall for you. Whether it's the right thing to do or not, she will do it."

Or all the other little Reform monsters he suckled and groomed, who wouldn't see anything wrong with the depraved way Harper treated Beverley McLachlin.

And would do ANYTHING their deranged daddy commands... 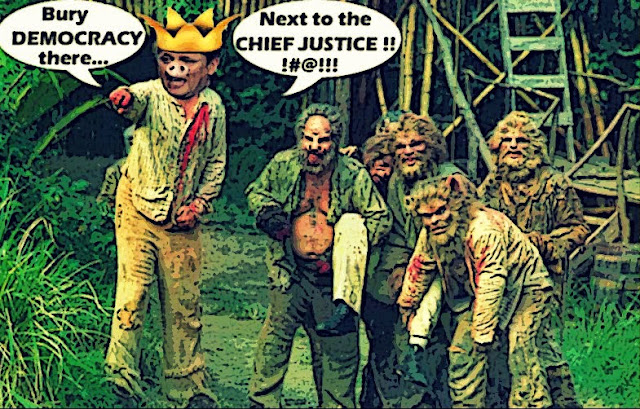 Today they may be enjoying burying our democracy, but sooner or later we will be burying the Con regime.

Because Harper badly needs to be restrained if he is going to be able to remake his tarnished image, and hope to win the next election. But they can't do that because he is THEM.

And he needs to restrain his little monsters, before they do something ghastly, and get caught. But he can't do that because they are HIM.

And sooner or later those crazed fanatics will get them ALL into even more trouble... 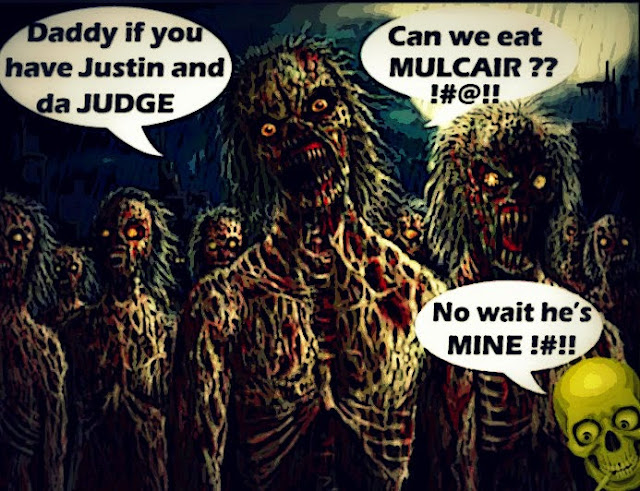 But don't take my word eh? Just wait eight days until Michael Sona's robocall trial begins on June 2,  and then I'm sure we'll all see where the Cult of Harper leads.

The shadowy PMO will be exposed, and the people who are really running this country will become a factor in the next election.

Golly, I like monster movies with happy endings eh?

He created them in his image, to wreak havoc on his enemies.

But in the end those crazed fanatics will help destroy him... 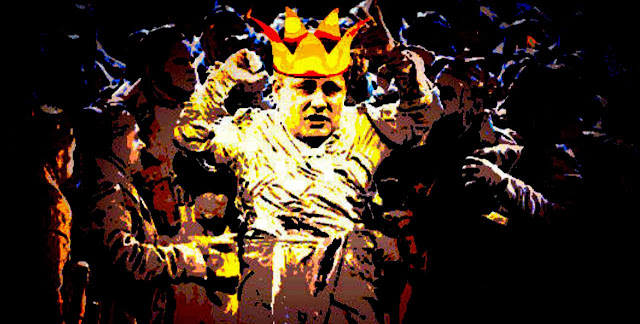 As I was watching Nixon being portrayed clownishly in the latest X-Men installment, it dawned on me that someday our own children will regard this dalliance with Harper with similar disdain and mockery. The Canadian public may not be there yet, but the day will surely come. Too bad Peevey Stevie is so good at dismantling all the good stuff built for this country in previous generations. But in a couple of years, there will be a new chief, and a chance to rebuild. Fear not.

.. Canadians should be very clear regarding Harper's unelected PMO, Simon
They should all be identified by name, position, job description, tasking and hierarchy or seniority
and.. we should know how many there are.. and at the very least the total cost of all their salaries.

These are not 'little monsters' sorry to say ..
More likely these are real people, some with families they go home to.. they may even have friends.

They were chosen, selected, even promoted.. to theoretically serve all Canadians, as public servants.
And there is theoretically a distinct hierarchy leading to & upwardly through.. various ministries, agencies
and so on, right up to the most senior public servant in Canada.. Stephen Harper
and Ray Novak, Jenni Byrne, Stephen Lecce, Guy Giorno et al
and one supposes Arthur Hamilton for example was also once plugged deeply into the PMO
as were/are various spokespersons, expert level trolls.. & some remain, some have moved on..
& some may be hidden.. or contracted

On a daily basis, most of these so called Canadians arrive at work & undertake their tasks..
and its possible to photograph them, identify them, review their background or resumes
The big burning question is.. what exactly are their tasks, and do they benefit actual Canadians
or are they paid by taxpayers funds to service the Harper Party/Government & related partisan factions?

Another burning question is whether these PMO public servants have any ethical threshold?
I doubt it.. as they were likely hired based on proven lack of ethics & willingness to not question orders.

Another question is what particular agenda these PMO public servants are servicing..
if they are not actually serving real Canadians.. ie are they servicing Big Oil?
Are they servicing Corporatism in general? Are they zealots servicing the pro-life caucus?
Are some tasked to service the spy agencies looting private emails and phone data?
How many are tasked on election propaganda, data mining or identifying environmentalists or scientists?

All my questions may be answered and laid bare, some day.. a Black Swan Day ..
After all, Simon, we can now look upon hires like Tom Flanagan, Bruce Carson, Arthur Porter, Nigel Wright
and gain stunning perspectives of what these people were tasked to do..

Who are the current top operatives of the PMO hierarchy today?
Aside from Novak, Byrne, DeLorey etc
and what exactly are they doing to.. or for.. Canada .. if anything?

at some point, we hope, there will be a "revolt" amongst the last few sane Conservatives, well the old Progressive Conservatives. Now if other parties would just get their acts together and stop fighting each other and turn their ammo on the Cons. We might get our country back.

14 Days: Making the Conservative Movement in Canada
by Bruce Carson

Release Date: June 14 2014
A first-hand look into the back rooms of the conservative movement in Canada, 14 Days provides insights into how the recent history of the Canadian right has influenced the Conservative government over the past two decades. Bruce Carson, having worked in close proximity to many Conservative leaders, describes a series of important moments in the disintegration, re-integration, and eventual repeated electoral success of the modern Conservative Party, formed from its Progressive Conservative forebears. Carson recounts how decisions are made and communicated, how issues are managed, and policies are developed under Harper's leadership. Crucial moments in the Conservatives' rise to power - from the devastating results of the 1993 election to the growth of the Reform Party and its election as Official Opposition, through the parties' merger, leadership decisions, conventions, and elections as minority and majority governments and most recently, the Conservative Party as majority government holder in Canada - are presented from the point of view of an outspoken witness and active participant. Carson candidly shares information on the government's approaches to Afghan detainees, the Cadman and Schreiber affairs, the 2008 constitutional crisis and worldwide recession, the development of their first budget, and the determination of the tenets of Harper's approach to federalism. A rare, behind-the-scenes account of the Harper Conservatives from opposition to government, 14 Days provides a vivid portrayal of all participants and will be eagerly read by anyone interested in the government's inner circle.

hi Scott....I have to believe you're right, and it's great to hear such optimism at such a gloomy time. I'm sure that the kids of today will one day ask us what the dark Harper years were all about, and how did something so awful happen? And I don't know about you but I'm preparing my alibi in the form of a sworn affidavit declaring that I am totally blameless. And please don't put me on trial with all the others. ;)
But seriously you're right, the Con regime is rotting on the vine, and we will rebuild everything they have destroyed...

hi salamander...I call them little monsters because of their complete lack of political morality, and their fanatic subservience to their monstrous leader. But of course they are merely Reform babies, who know nothing but politics and believe, as I said in my post, that the end justifies the means. And I hope that Canadians pay more attention to the PMO gang, because they after all the tiny group that is running the government in the absence of Parliament, and they are responsible for one democratic atrocity after the other.
This blog is among other things a way to catalogue their crimes, so I can press for their prosecution as soon as the Con regime is finally toppled. Thanks to a couple of excellent and heroic sources in Ottawa I have a pretty good idea of what's going on in Harper's inner circle. I can't say more about that now for obvious reasons. But when I say that the Cons are preparing for an early election people should heed that warning...

hi e.a.f....if Harper's low poll numbers continue into the fall, some in the party will start to panic, and we could see some very interesting developments, as well as growing pressure on Harper to resign. But yes we are approaching the point when we must put our country before our parties, and hopefully unite to drive the Cons from power for a long long time....

excellent, thanks for both Salamander and your comments, always enlightening.

"And there is theoretically a distinct hierarchy leading to & upwardly through.. various ministries, agencies and so on, right up to the most senior public servant in Canada.. Stephen Harper "

If you mean the PMO people have come up the ladder, no. Most or all PMO are except staff which means that, as opposed to a normal civil servant, they are able, and expected, to be partizan. I think it is more appropriate to think of the PMO not really as part of a hierarchy but off to one side like a staff group rather than a line group.