Tubby Van Loan and the Collapse of the Con Regime 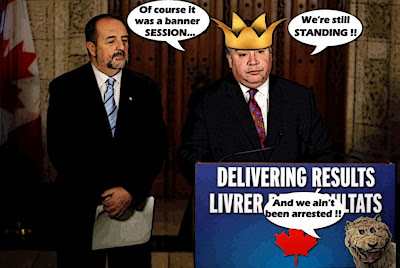 It couldn't have been a more surrealistic sight. The absurd Con House Leader Peter "Tubby" Van Loan, standing behind an absurd sign, declaring absurdly that the fall session of Parliament was a huge success.

Amid calls for democratic reform from his own caucus, the Conservative government's House Leader is instead celebrating his party's legislative accomplishments - saying Canada's Parliament is working better than ever.

"We’re very, very pleased with the progress that was made in this fall session, as well as a number of the bills that were introduced, bills that made it off to committee, bills we got over to the Senate for their consideration,” he said, calling it “overall, a very, very productive year.”

Even though the Cons only passed THREE bills, the Senate scandal dominated proceedings, and their Great Leader was clubbed like a seal by Tom Mulcair over and over again.

When he wasn't running for cover… 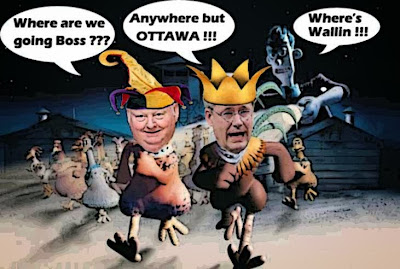 While police investigated his office, and rebels in his caucus, like Michael Chong, worked on a Reform Act to trim his feathers and this powers.

Which was something Van Loan would rather not talk about eh?

Mr. Chong’s bill, however, was not one Mr. Van Loan is keen to discuss. Asked repeatedly by reporters on Thursday for his assessment of the bill, Mr. Van Loan remained silent and walked away.

Instead he'd rather blame the heat the Cons are taking over the postal situation, on the rich people in Rosedale. 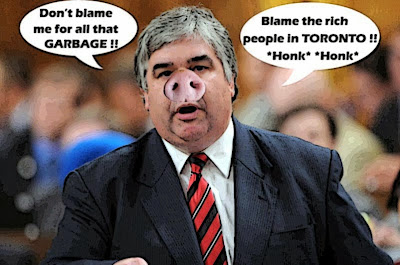 Government House leader Peter Van Loan is striking back at critics of Canada Post’s planned service cuts, comparing them to wealthy big-city dwellers who complained about having to lug their trash to the curb.

Even though that only made Tubby sound like Robbie, the depraved mayor of Toronto. Which isn't good eh?

And even though as Chantale Hebert points out, the latest controversy caught the Cons with their pants down, or missing in action.

On the day that Canada Post unilaterally declared its intention to impose a major service cut and a substantial price increase on a massive number of Canadians, the country’s Conservative consumer champions went missing in action.

It is not that many Canadians harbour the notion that the current Canada Post model can be sustained in the face of ever-growing online competition. But the passivity of the Harper government in the face of Wednesday’s developments stands in such stark contrast with the activist pro-consumer talking points it has chosen to hammer throughout the fall session as to suggest that the government has lost if not its way at least its messaging track.

But then Tubby is walking around in his underwear, the Cons are making it up as they go along, and they're all DESPERATE. 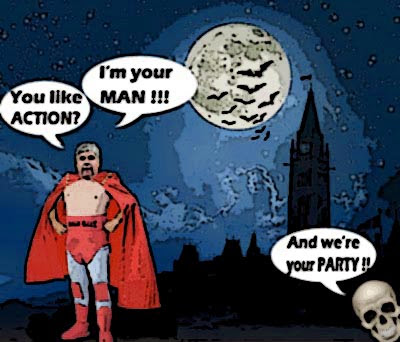 The Conservatives are facing a cooler reception from Canadians as they head home for the holidays, with new poll numbers suggesting a significant drop in the party's brand strength in traditional strongholds.

According to the Nanos Party Power Index, the Tories are losing ground to the NDP and Liberals in Ontario and the Prairies — key battlegrounds in the next federal election.

Their brand is fatally damaged, nobody trusts their leader, all they can look forward to when they return are more scandals and more pain.

As surely as day follows night, the Conservatives face a barrage of questions about the future role of Canada Post after the House of Commons reopens in the new year.

Until like their good buddy Rob Ford, they go down and don't get up…

Yup. The Cons are running out of time and history.

Their corrupt regime is collapsing.

And the monstrous nightmare is almost over… 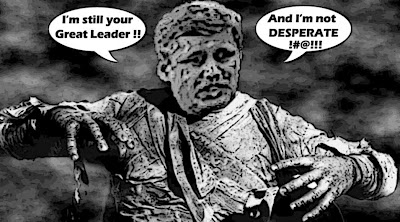 I've come to not trust the polls Simon and still have fears these thugs will show up in parliament yet again in 2015. If the rank stupidity in BC to elect the unelectable Christy Clark spreads across the country, we could be stuck with this gang another 4 years. Don't forget there's folk who would stand behind harper even if he was on national tv slitting his grandmother's throat.

Simon, you're seeing this wrong.

Think of Van Loonatic as the reincarnation of Jackie Gleason, spouting the caption "to the moon, Alice."

I'd like to personally interview 10 people from York-Wherever who voted for him, to get their honest opinion of this dude.

The phrase comes to mind 'when I get finished with Canada, you won't recognize it.'

Heaven help us all !

That animated non-comic short about Rob Ford was a hard one. Already, with all the pastiches chanelling Chris Farley and/or Amy Winehouse, we can see a pattern...

On the other hand, someone in my riding taped a handwritten note in support of her postperson - facing -22c and -8000 jobs. Nice gesture.

I recall you saying more or less the same crap before the last election. Oh yes you were so sure that the Tories would be defeated. Recall that Simon? How sure you were? Recall how wrong you were?

Maybe one day you will get it right, maybe.

Once a Fascist Dictator gains control, they are very difficult to get rid of. Ex BC Liberal Premier Gordon Campbell is, one of Harper's favorite henchmen. Campbell twice lied and cheated to win his elections too. Campbell used every dirty tactic in the book to stay in office, just as Harper is doing. Christy Clark works for Harper as, Campbell did before her. Harper and Christy Clark, prorogued Parliament and the BC Legislature, very close to the same time. Harper rewarded Gordon Campbell the post as, High Commissioner to the U.K, for doing his dirty work for him. Harper, Campbell and Christy Clark, have all been accused of election fraud. Most of us know? Christy Clark is not running this province? And, we all know just who is.

We pretty much know? Harper would pull a Ford who, is a very good friend of Harper's. Harper isn't finished with, giving Canada to foreigners. Resources, resource jobs and even our Canadian farmlands.

could say the same for you anon, but you keep falling for these used car salesmen who could really give a rats ass about you and the rest of us have to put up with it.

@anon 2:00 PM actually you have it wrong, Harper only got 25% of the available vote plus he had to cheat to even get that. How could Simon have foreseen such blatant manipulation of something so ensconced in trust and righteousness as the ability to cast your ballot fairly without interference? Without that slime-ball con theft of the 2011 election, harpers ass would have been grass.

So much for job creation. lets eliminate more jobs. it won't save money. it will simply put more people below the poverty line. one dollar for a stamp is not much compared to how much mail costs in other countries,. one dollar, in my opinion isn't a bad deal.

Many people do not have access to the internet. they rely on mail to receive their bills, pay their bills and communicate. Canada needs to continue to have a government run postal service.

The problem is the government and the executives at Canada Post never thought ahead. They knew they had employees who would retire some day and would want to collect their pensions. these workers paid into their pension plans. what did the government do with all that money. For the majority of years they threw it into general revenue or loaned it to provinces at 3% while the going rate for money was 18 and 19%. Now suddenly Canada Post is crying they have to pay pensions and they can't afford to provide services. Well they should have thought about that back in the 1960's. But no, they were accessing government workers pension contributions to use for general revenue. Now their bad business decisions have come back to haunt them.

No one in older areas will want the communal postal boxes on their property. That certainly will be the first fight. Then there is the small issue of security. Those boxes are just sitting there for some one to steal their contents. In the end, they will eliminate services and not save any money.

hi lagatta…yes that was quite different than the videos the Taiwanese animators usually make, and I must say I was quite impressed. It does show the possibilities of simple digital prop art. i really must learn how to do that.
As for the note for the post person that was a nice gesture. I'm sorry to see all those cuts, on top of all the others. The situation is depressing, and of course the Cons have no vision or imagination, all they want to do is reduce service and make us pay more so they can privatize it like the Cons have in Britain...

hi e.a.f….I agree with you completely, the Cons and their tools at Canada Post have mishandled the situation, and their incompetence will have a big effect on the elderly and the disabled. And you're right, in a city where so many people live in a small area they are going to have to put communal postal boxes everywhere. They will look horrible, and crooks could have a field day...