The Cons and the Imaginary War on Christmas 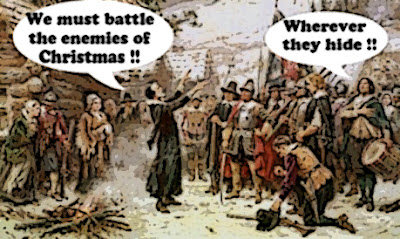 Oh no. Duck and cover. Two weeks ago I accused the Cons of waging a real War on Christmas, by laying off people and killing jobs at this time of the year.

Now it turns out they're also in the trenches defending themselves from the imaginary War on Christmas.

Federal Conservatives have spent a significant part of December mounting a rather lopsided defence in the War on Christmas – lopsided because it didn’t seem like anyone was fighting back.

Led by the idiot King of Muskoka Tony Clement… 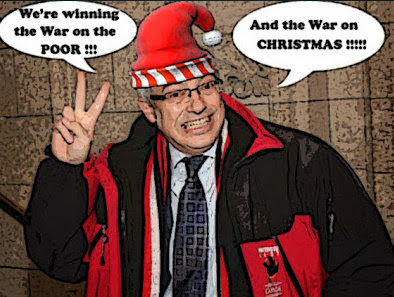 “I would like to inform the House that it is in fact the festive holiday season throughout the land. Whether it is Hanukkah or the advent of Christmas, public sector employees should also be able to decorate and celebrate,” Mr. Clement said during a daily Question Period in early December. “Our government has made it clear that the workplace can be a festive zone and we will not be grinched by the forces of political correctness.”

Aided and abetted by other Con Holy Warriors like David Sweet.

“I hear a lot about political correctness and wishing someone merry Christmas. There are those who will say, ‘do not say Merry Christmas; say happy holidays,’” Mr. Sweet said during one Question Period.

“Political correctness is deluding Christmas in a well-intentioned but unnecessary attempt to be inclusive. After all, we deck the halls of Parliament with Christmas trees, not holiday trees,” he said. “As we spread holiday cheer this Christmas season, I ask the Minister of State for Multiculturalism if he considers it an offence to wish someone Merry Christmas during the holiday season?”

Who are making absolute fools of themselves, by flailing away at the imaginary enemy, like their fellow Cons, religious fanatics, and Fox News tea baggers in the United States. 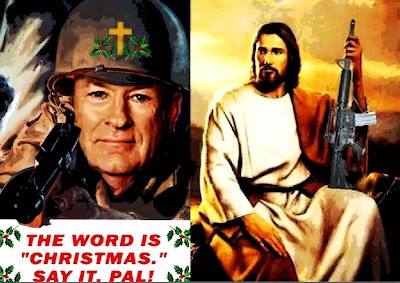 Conservative mouthpieces and news outlets warn that "the right to celebrate Christmas is under attack," and that "challenges to religious freedom are taking place."

Where it's just another front in the war on reason, or the very real War on Gay People.

Even homosexual activists are part of the war, it seems. Why else, ask the conservatives, would Hallmark have been forced to remove the word "gay" from one of its Christmas ornaments?

Or the War on Diversity... 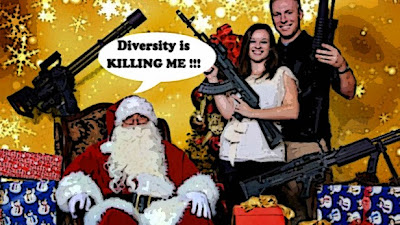 Where nobody is safe from those deranged religious fanatics.

A war conducted by the RepubliCons for the same reason the HarperCons conduct it here.

Trevor Harrison, a political science professor at the University of Lethbridge who has studied populist politics, said the War on Christmas targets small-l liberalism and secularism and tells Conservative supporters that the government will stand up to “the people who are trying to trash your traditions.”

But because the Conservatives have spent so much time courting Canada’s ethnic communities, they have to do it in an inclusive way that appeals to all religions, said Mr. Harrison. They want to suggest that their political opponents, he said, are “anti-religious, wishy-washy types who just want to get rid of these important cultural values such as Santa Claus.”

To try to create yet another wedge issue, and pit one group of Canadians against the other, even if it poisons the spirit of the season.

All of which leaves me, a gay guy and an atheist who enjoys the lights, the sounds, the food, and the kinder, gentler, traditions of Christmas, shaking my head in disgust.

I mean can you believe those Con grinches? What absolute nonsense.

I wish Merry Christmas to those I know are Christians, and Happy Holidays to all the rest. Just like I say hi to my English-speaking friends. And bonjour or salut to my French-speaking companion.

I see the holiday season as a great excuse to celebrate family and friends, take a break, and welcome the slow return of the sun to our frozen wasteland, just like our pagan ancestors did.

And as I like to point out every year, if forced to choose between this version of this classic Christmas song…

And my fabulous gay brothers…

Yup. Whatever you call it. Whether you're religious or not, merry or just happy.

Reach out to the sad and the lonely, hug the ones you love.

Ask Santa to bring us a new and more Canadian government eh?

And have a great one everybody !!!

hi Steve...hey thanks a lot. I appreciate the honour, and the support. Although did you really have to put me on the same page as Tarantino ? ;) Happy holidays to you and yours...

hi Sean, I mean anon....OK it's a deal. I'm not ashamed of not being an alcoholic. And of course when I do tell the people, I'll be sure to include the classic video of you ...um...dancing after at least SIX beers. ;)
Merry Xmas you old sod !!!

Perhaps the cons, could leave all their war speak somewhere else during the Christmas season. it would make things so much more peaceful.

So mr clements thinks the work place should be a festive place during Christmas. well it might be if federal government workers weren't so concerned about their future and that of their unions. it might be a more festive place if the cons hadn't declared war on the Canada Post workers.

Telling vets who are in a government office, trying to get benefits they are entitled to, Merry Christmas, right after they have been refused what they need, is just bad manners.

I like the Merry Christmas thing. It can be a secular greeting or a religious one. It is up to the person saying it and the person hearing it. its nice to see the nativity scene even if one does not believe. Its just a nice peaceful scene. of course there isn't much nice and peaceful about the cons and their war on just about anything Canadian.

there are many faith, ethnic groups in Canada and we all have our special festivals. its nice if people simply acknowledge all of them. Just look at it as being able to have a few more occasions. Like who couldn't use 3 new yrs. the one on our calendar, then the Chinese calendar, then the Orthodox calendar, etc. it depends upon where you live in Canada.

as long as there is no force involved in the form of greetings I don't think we have a war here.

hi e.a.f...of course you're right it's a totally contrived war. And no real harm is done by wishing the wrong greeting. Although I usually end up saying Merry Christmas Happy Holidays because I don't want offend anybody. And I like having my plum pudding and eating it.
It is after all the spirit of the season that counts. And although I'm an atheist, because I simply can't believe in a heaven, I was raised in the Christian tradition, I share the message of a revolutionary Jesus, I was a choirboy believe it or not, and as I said in my post, I enjoy the sights and sounds of the season and the food.In fact I'm thinking of writing my usual Christmas post, which usually shocks my fellow atheists, almost as much as it shocks my saintly mother ;)
Merry Christmas to you and all your loved ones !!!!