The Unbearable Lightness of Leona Aglukkaq 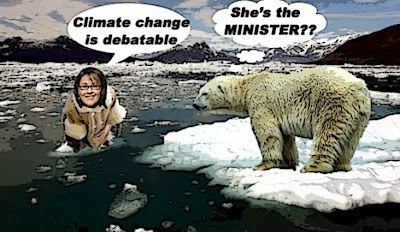 Well as you know I'm not a big fan of Leona Aglukkaq.

I had high hopes that as an Inuk she might do a better job as Environment Minister that she did as Health Minister.

But she has disappointed me from the moment she got her new job,

And this doesn't help... 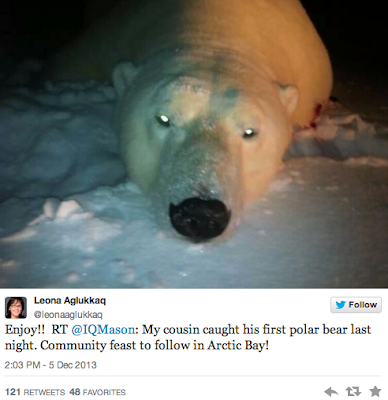 Not when she's at a conference in Russia celebrating a treaty to try to save our precious polar bears.

Environment Minister Leona Aglukkaq has fired up a Twitter storm after posting a picture of a dead polar bear and downplaying scientific concern about threats to the survival of the iconic species.

And not after her comments just a couple of months ago.

Aglukkaq raised the eyebrows of scientists in October after downplaying evidence of global warming, and suggesting the species was in good shape because her brother was observing more polar bears in his northern community. “A lot of time, scientists latch on to the wildlife in the North, to state their case that climate change is happening and the polar bears will disappear and whatnot,” Aglukkaq told the Globe and Mail.

When she seemed to forget that if more polar bears are visible in some regions, it's only because the ice upon which they depend is MELTING.

So needless to say I wasn't impressed to see her today, along with that other Con clown John Baird, preparing to claim the North Pole for Canadian oil and mining companies.

Foreign Affairs Minister John Baird said Monday that Canada will make a claim to the North Pole, but has not finished the science around its Arctic seabed claim. Baird and Leona Aglukkaq, who chairs the Arctic Council, made public Canada's claim to the extended continental shelf in the Arctic, in a press conference in the foyer of the House of Commons.

Without having after all these years gathered enough evidence to prove that the North Pole belongs to us.

And just a day after this alarming report was released.

A new study for the first time found links between the rapid loss of snow and sea ice cover in the Arctic and a recent spate of exceptional extreme heat events in North America, Europe, and Asia. The study adds to the evidence showing that the free-fall in summer sea ice extent and even sharper decline in spring snow cover in the Northern Hemisphere is reverberating throughout the atmosphere, making extreme events more likely to occur.

Which only makes me hope that her brother was right about the polar bears eh? 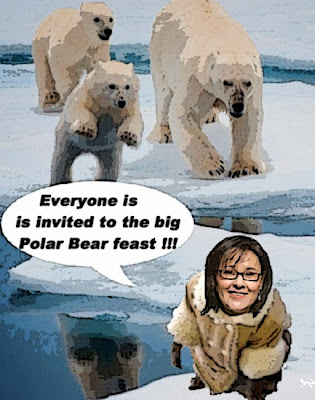 And leaves me with only one question:

Can we please get rid of those ghastly Con climate change deniers?

Before they look even MORE stupid, greedy, and dangerous.

And before they destroy the planet…

even if the climate change is human caused, we know the climate has changed in the past and will do it again. The climate has changed when few people were on the earth. We need to prepare for climate change regardless of why it is changing. We have had ice ages, we have had warm cycles. Now we appear to be having huge storm cycles and rising seas. We need to prepare for this and not destroy what land there is or the animals. If we do we will be sorry later.

It doesn't matter how many polar bears her brother sees or doesn't see. He only lives in one area. he does not live or move about the entire artic.

We need to remember just because some one is First Nations, it doesn't make them any more concerned about the earth than any other group, especially if they joined the slimmer group.

Leona Aglukkaq is a fucken moron. Gotta love these clueless climate change deniers, hey? And her horseshit about polar bears who have to swim for days on end just to find any ice to hunt from, because it's all melted. Warmer weather affects sea ice distribution, a polar bear's habitat; not that a clown like Aglukkaq would notice, since most deniers can't differentiate between weather and climate anyway.

Idiots like her love to scream 'there's more polar bears than ever! Too fucken dumb to know litter numbers are declining. Or that the loss of sea ice (less food) reduces the body weights of bears. Or that bears with lower body weight produce fewer cubs. Or that climate change forces bears to spend more time on land where there is virtually no food.

And this stupid idiot who doesn't know any of this is Minister of the Environment.

"There's more bears. I can see em.' Yeah well of course there's more bears where you can see them you morons, because THERE'S NO ICE. Bears are only there on land because THERE IS NO ICE. It's MELTING. And that's where they hunt and EAT from, ya know? So they wind up in your fucken garbage can where you can SEE MORE of them. But it does not mean there ARE more bears. In fact there isn't.

Less ice means lighter bears and adverse body conditions. That in turn means bears produce fewer clubs with worse survival rates. Which is why REAL environmental researchers KNOW females weigh 40 kgs LESS than 25 years ago and that litters are SMALLER.

NO, its not, but a MORON might think so.

Because the ICE they HUNT from is all melting. From climate change. So they scrounge wherever they can, like your fucken garbage can. But less food means lower body weights. Lighter bears have less cubs. Smaller litters mean numbers are DECLINING. This is the SCIENCE. This is the FACT. Is our embarrassment of an Environment Minister allergic to reality? Take the icepick out of your fucken forehead ya numbskull.

Jeezus crackers and cheese.I am so sick and tired of these mud dumb stupid Cons.

hi e.a.f….It's a horrible irony of history that a country like Canada, with an arctic so threatened, should not only fail to protect it, but lead the fight against those who would. It capitalist greed could be controlled, and decadency ruled, the arctic would be declared a treasure of humanity and a development free zone….

hi wazz…I know it is depressing eh? As I said in my post I was actually hoping that Leona Aglukkaq being an Inuk would do better than that. But unfortunately she has turned out to her worse than useless, a walking talking point like so many others, and an absolute fool. I fear for the future of those magnificent bears, and I can't understand how anyone could ignore their plight, and not do everything they could to save them. But their plight is our plight, and we know what we must do if we are going to save ourselves….

Wazz, litter numbers aren't declining. Mothers usually have 2 cubs, it is an extreme rarity to see 3. Come to Nunavut and learn about the bears first hand as I've done for the past ten years. Remember they have been around for 200,000 years and have lived through warming trends before and adapted with ease. They are a supreme predator that eat more than seal. I've witnessed them stay at the same lake as I was at for a week just for the fish. They eat eggs, berries, and land mammals too.

As for Leona, well I'm not a conservative usually don't agree with her but there was nothing wrong with celebrating a bear hunt. It's the most sustainably and cautious controlled and managed hunt in the world. I would take a closer look at wildlife management in Nunavut before spouting off a bunch of nonsense about things you know nothing about.