Stephen Harper and the Mauling of the Military He did so love to play soldier. For years he posed as a Great Warrior Leader.

He ordered our troops into the most dangerous part of Afghanistan without the proper equipment. He spent $20 billion dollars, cost us and the Afghans so many lives. He covered up torture, but still lost the war.

Then when he realized it wasn't winning him votes, he cut and run like he said he never would. He betrayed our wounded soldiers, cheated older veterans out of their pensions.

And now there will be no new armoured cars for the troops.

And no parkas for the cadets.

Military budget cuts are leaving cadets out in the cold, with a freeze on the purchase of parkas just as winter kicks in. A $2-million chop to the outfitting budget also means some of Canada’s 53,000 cadets will have to recycle and swap used uniforms, and to forgo military-issue gym gear.

The clothing crunch comes as the Canadian Forces are being ask to tuck and trim everywhere to help the Harper government slay the federal deficit by 2015.

Just so he can get a pot of money to bribe some key voters in the next election... 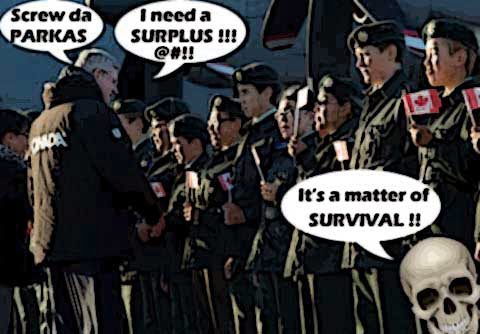 And all I can say is how cheap is that grubby little man? And how shameful his foul Cons.

Who would put their crass political interests before the needs of our soldiers, and the comfort and dignity of some of Canada's most idealistic young people. In a country as cold as this one.

And his ghastly legacy is a trail of death and destruction, and the mauling of our proudest military traditions.

After almost two decades of service to Canada and the world, the Pearson Centre, formerly known as the Pearson Peacekeeping Centre, is shutting its doors this month. The Centre was established in 1994 by the Government of Canada and became the flagship of the nation’s commitment to UN peacekeeping, providing world-class training to peacekeepers from Canada and around the globe.

For he would destroy everything noble and decent and Canadian he touches... 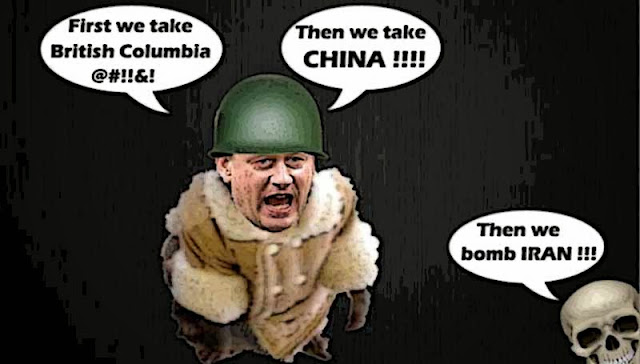 Make an absolute idiot out of himself, and disgrace us all in the eyes of the world.

Meet Stephen Harper. NOT a Great Warrior Leader. Not a great Canadian leader either.

Just a poseur, a fraud, a grubby Con.

And a wonky WIENER...

that about sums it up Simeon. Just hope the parents of cadets remember this when it is time to vote. If everyone who has been offended or hurt by this government remembers it come voting time, who knows, even if they try to cheat, the cons maybe gone.

A lefty complaining about lack of funding for the military, that is too rich and frankly I am not buying it. Tell us, dear Simon, about those "armoured cars"? Tell us all about the CCV program that you clearly know all so much about. Think the CF would be better off with Muclair or Shiny Pony in power? Prove it.

Ha-ha-ha! Read the words of the sniveling anonymous coward! What do YOU know about anything you stupid dip-shit? Prove yourself to us! Demonstrate your capacity to do anything other than puerile sniping from the sidelines!

As if harper's gutting of pensions and closing of Veterans' Affairs branches isn't testimony enough to his fraudulent posing as a friend of the military. He's just another corrupt, money-grubbing chickenhawk. Like you.

Oh dear, dear Thwap....tsk...tsk. Such anger and hate, didn't saint Jacko warns us against such things?

hi e.a.f...I just had a horrible thought. Could Stephen Harper have been in the cadets? And is that where he learned to bully others? Because you can imagine what he might have done if he had the power to order others around. But yeah, let's hope the military and the cadets remember what the Cons did to them, and finally stop voting for them...

hi anonycon....Gawd. Not you again. Did they let you out early because of the holidays? And where did you get the idea that lefties don't fight. The right-wingers were the Nazis remember?And what I do know is that those new armoured cars were supposed to be safer than the older ones. Why else would the Cons order them. And when I look at the Harper record on procurements, and the way they have treated our wounded soldiers, of which I know a lot mores than you. Or the way they have treated other veterans, I think ANYBODY would be better than them...

hi thwap....nice to hear from you, and great to see that you are in excellent shape. But as you point out anybody who would defend the way the Cons have run the military, must either be out of their minds, or getting ten cents a comment from the PMO. It's shameful but then they are shameless. Merry Xmas Happy Holidays....;)