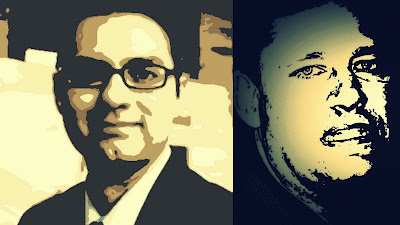 Golly. It's a miracle I tell you. Remember how the Cons told us that Benjamin Perrin's e-mails had been deleted when he left the PMO?

So we couldn't determine what that PMO lawyer told Stephen Harper about the Duffy deal.

Well it turns out that was just another oops, or another Big Lie.

The federal government initially believed it had erased all of the e-mails belonging to lawyer Benjamin Perrin when he left the PMO last March. When the RCMP came looking for the communications as part of its investigation into a $90,000 payment to Mr. Duffy from former PMO chief of staff Nigel Wright, it was told that the e-mails had been lost.

However, the PMO announced Sunday night that Mr. Perrin’s newly recovered e-mails would be provided to the RCMP “immediately.” While it is common practice in Ottawa to delete e-mails of departing PMO employees, Mr. Perrin’s e-mails had been protected because of ongoing litigation in an unrelated matter.

So now we might find out more about the Duffy Deal, and what Nigel Wright really meant when he said Stephen Harper told him the deal was good to go... 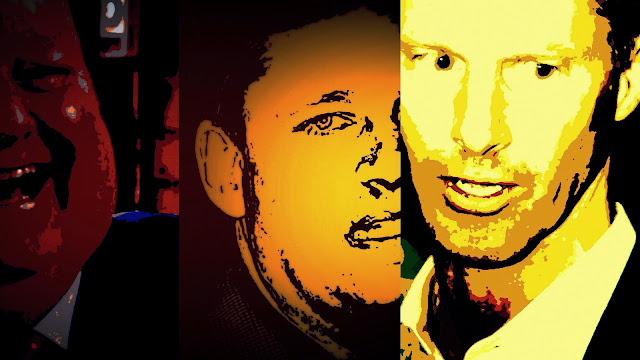 An hour later, Mr. Wright messaged back: “We are good to go from the PM once Ben [Perrin] has confirmation from [Mr. Duffy’s lawyer].”

Or how Stephen Harper can claim that he was only approving a plan to get Duffy to pay back what he owed with his own money?

Which never made sense eh? Why would you need a FIVE-POINT deal to do that?

And how can he explain that he knew NOTHING?

When so many Cons in his inner circle did...

And of course, the Privy Council Office, the bureaucratic arm of the PMO, also has some explaining to do. Because although they want everyone to know, especially the RCMP, that they're really, REALLY sorry.

“We regret that we previously failed, even if inadvertently, to accurately inform you and the PMO about the availability of Mr. Perrin’s e-mails. We apologize for any inconvenience it may have caused,” PCO official Isabelle Mondou wrote to the RCMP.

This isn't the first time something like this has happened. For if you remember when reporters made an Access to Information request to try to get their hands on the Senate paper trail, the PCO claimed there wasn't one.

The Senate expenses scandal may have generated a lot of headlines this year, but apparently it hadn't prompted a single email, memo or even a sticky-note in Stephen Harper's own department by the height of the controversy in June.

The Privy Council website indicates a total of 23 such requests about the Senate had been processed by June. Every one of the requests yielded "zero" pages, and a notation that the information requested "does not exist."

When even Ol' Duff knew better.... 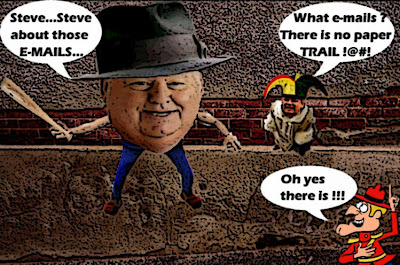 And as we now know, according to the RCMP affidavit, there were more than TWO THOUSAND e-mails.

Which of course, leads to these obvious questions:

Are the sinister Con operatives in the PMO really THAT incompetent? Or was that also part of some massive COVER-UP?

And now that the PMO has "found" the Perrin e-mails, will the RCMP please determine whether any of them have been doctored? Or whether there is a mysterious gap in that e-mail chain, like there was in the Nixon tapes during the Watergate scandal.

Because as we all know, the Con fanatics in the PMO are capable of ANYTHING... 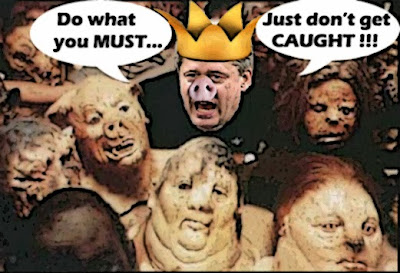 As is their depraved leader.

And of course all of the above leads to the Big Question: Will those newly "found" e-mails condemn Perrin, for failing to do his duty as a lawyer? Or will they condemn Harper?

And will Great Scandalous Leader still be able to claim that he knew NOTHING?

Golly. If I had heard about the Perrin e-mails a little earlier today I might have been able to run over to the Convention Centre in my neighbourhood, and asked Harper himself eh?

Because he was there singing for his supper, and announcing plans to visit Israel.

And I would have loved to ask him whether that trip will be just another hollow exercise designed to distract us from the Senate scandal? Or in view of the latest revelations does he plan to remain there in EXILE?

Oh well. At least I know the meaning of that awesome sunset over Toronto the night before the Dark Lord visited the city... 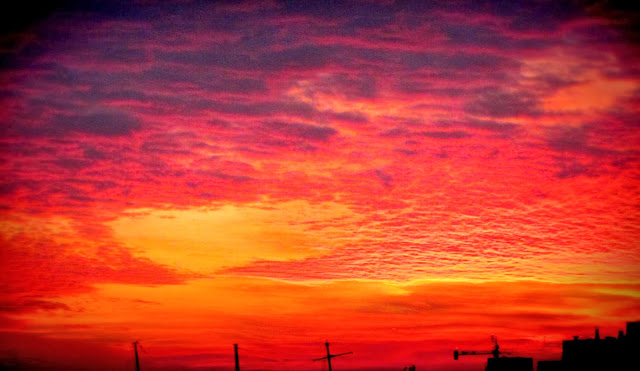 Because I knew it had to be some kind of omen.

And I'm guessing, or at least hoping, it's this one eh?

The Senate scandal just got even MORE interesting.

Slowly but surely the Con story is falling apart. Or going up in flames.

The writing is in the sky.

And brighter days are coming...

And now that the PMO has "found" the Perrin e-mails, will the RCMP please determine whether any of them have been doctored?
Survey Says: "OF COURSE THEY HAVE BEEN DOCTORED!!! THAT'S WHY THEY MAGICKALLY RE-APPEARED!!!
BECAUSE NOW THEY'RE EDITED SANITIZED ENOUGH THAT THE DUDLEYS WON'T BE ABLE TO DISCERN SHIT FROM THEM!!!
And harpie's in his heaven and all's right in Mordor once again.
Amen

Its going to be a challenge but there is a good chance Harper will succeed Diefenbaker as Canada's worst PM.

Amazing that the Lord, and Stephen Harper, apparently work in mysterious ways. Just when we thought that Perrin's emails were lost, a miracle occurs and Perrin's emails are found after all.

As far as Harper is concerned, he skips QP but attends the Jewish National Assoc. dinner to sing songs. Now he wants to spend more taxpayers dollars to visit Israel instead of answering questions in Parliament. The only song I would hope he should be practising is Jailhouse Rock as, hopefully, he will be singing that to Wright, and his other PMO/PCO buddies.

Now, if the e-mails haven't been edited, we will see if Perrin really turns out to be the link in the chain that brings down Harper. I thought that if anything was going to sink the Furhrer it would be Perrin. I suppose the contents may take months to become public if they become public at all.

The emails may hve been "found" because, even if you delete things from a computer, a really good teckie can find anything. Perhaps the RCMP were going to get a search warrant and sieze the computers to have their teckies go through them. Now if that was the case, of course they would turn over the emails. That would be sooo much better than having to turn over the computers.

Ah for the days of good old paper and typewriters. You could just go get the file, throw it in the waste basket and light a match.

As to what is in the emails, expect Perrin and Harper to get right behind that lovely phrase, "lawyer and client confidentiality". Then there still is intellectual property rights.

It is doubtful Perrin will risk his whole career to keep Harper's neck out of a noose.

If Harper is going to Israel, he must be desperate to get away from Q.P. With vacation coming up and then his "vacation' to Israel, he will leave his spokesperson to tell stories when questioned about the whole Duffy et al scandal.

There is no need for Harper to go to Israel. I'm sure Nattie can do without his visit. We have much to do in Canada and you'd think the P.M. would hang around to do the work. Guess not. Suggestion: lets have the opposition leaders all join Harper on the trip. Well, anyone of them could be P.M. after 2015. Of course if any Arab countries start throwing a few rockets towards Israel, we can expect "warrior" Harper to stay home, where it is safe and sound. its fun to wear those camos, but not so fun to do the work of fighting. While he is in the neighbourhood of all the fighting, he could spend 48 hrs. in a war zone and then decide whether veterans should get their funding back. When suggesting, spending 48 hrs. in a war zone, its where the bullets are flying, where there are mines on the roads, where people are killing and being killed. Show him a few bodies which have been blown apart. Harper could also go visit with some girls and women who have been raped during these conflicts and are pregnant. Then he can think again about not funding abortions for females who are raped during war, where rape is used as a weapon. harper can talk to some 12 yr old girl who has been told no abortion.

hi anon...It's not that easy to doctor them, not if you retrieve them from the server which I would expect the RCMP to do. And of course if it was seen that the e-mails had been doctored or disappeared it would be big trouble. So don't worry we have the ring and Mordor will soon be ours... ;)

hi Steve...why are you directing us to a blank post? Are you losing your mind or am I? Besides what have you got against Dief? He might have been a bit shaky, but compared to Harper he's practically Gandhi. But then compared to Harper I'd also look like a saint, so who knows eh? In the darkness of November we ALL go crazy... :0

hi anon...yes I also thought it was a miracle, in fact I was preparing to sacrifice a can of sardines to give thanks for this blessed event. Until like Simon and the Pieman, or the PCO and the PMO, I realized I had not any. And yes, I do like Jailhouse Rock. I play it on this blog quite frequently. And if any of the Cons end up in jail close to where I live, I intend to rent a speaker truck and play it outside the pen... ;)

hi Kirby...yes, they could be very damaging, especially if they link Harper in any way to the scandal. But also just be clearly establishing that this was a deal to try to cover-up a scandal. THe bad news is that it probably will take a while for them to be public. The good news is it will help keep the scandal bubbling along merrily all the way to the next election....

hi e.a.f...if the Cons had to burn the evidence by eating it or burning it in a waste basket they would have all died of constipation long ago, or burned down Parliament.

P.S. Gawd. What am I doing? One should never give Cons such dangerous ideas. Remember the Reichstag !!!!!!!

I am enjoying your blog a great deal Simon. I am from alberta, almost 60 years old and have been following politics all my life. I was pretty young when Dief was the PM and I remember well, the jubilation when Pierre Elliot Trudeau won the Liberal leadership race. I have NEVER seen such disgrace as I've seen regarding Harper and his band of thugs and liars. I have never wanted to see a government fall as much as this stinking, rotting, cancer on the Canadian political landscape. I want these guys to fall worse than the Campbell example. Do you think there is any chance of this in 2015?