Rob Ford: The Con Thug and the Death of Decency 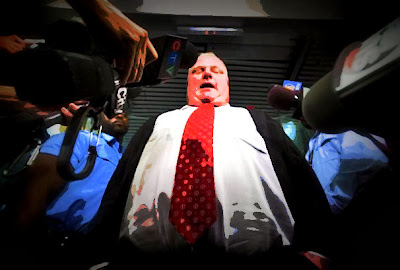 He has shamed us all in the eyes of the world, with his moral corruption, his bloated vulgarity, his bestial behaviour.

He stinks of Con Canada, it oozes out of every sweaty pore.

He simply can't help himself. Just when you think he can't sink any lower, he does.

He blames the police chief for his criminal problems, he smears a decent Toronto Star reporter.

Ford also implied Toronto Star reporter Daniel Dale was a pedophile for what Ford described as taking pictures outside the mayor’s Etobicoke house.

He stands by his filthy words.

Asked on Tuesday afternoon if he would apologize to Mr. Dale, as Deputy Mayor Norm Kelly urged him to do, a defiant Mr. Ford said that "I stand by my words" and "if you watch the interview you'll know what I said."

He is a bully, he is a bigot and a misogynist, he is a man who hangs with criminals. He is the death of decency. 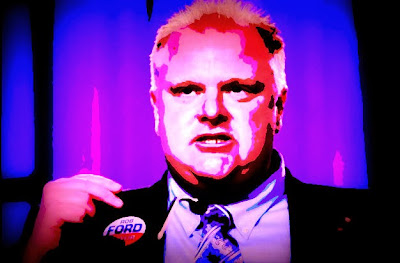 Watching him on TV, it was hard not to think of the famous words of lawyer Joseph Welch when he confronted anti-Communist crusader Joseph McCarthy at the Army-McCarthy hearings in 1954. McCarthy had accused a young attorney in Welch’s firm of having once been a member of a supposed Communist front group.

“Have you no decency, sir, at long last?” said Welch. “Have you left no sense of decency?” In this case, the answer would appear to be no.

And whatever he says, in his depraved and deluded condition, he is the worst mayor this or any other Canadian city has ever seen.

And those who still support that freak of nature, like the Moron Nation and the ex-convict Conrad Black, should be treated with the contempt they deserve. For they are as bad as he is. 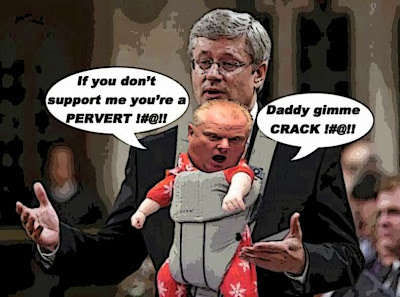 For he suckled him like a sow from the moment he came to office. He enabled him. He has refused to cut him loose.

Both of them have degraded and humiliated us in the eyes of the world more than any other Canadians ever have, and so help me Polar Bear God of the Great White North, they are BOTH going to pay for it. Big Time.

You know the other day I was speaking to my Mum who lives in a small town in the north of Scotland. And when she said "your horrible Mayor has been in the news a lot," I felt my ears turning red.

Because both my parents raised me to demand so much better. I want to be proud of this big, beautiful, and still young country. And I was so ashamed.

But at least I was able to tell her this eh?

I've never worked on a political campaign before, but as soon as Olivia Chow declares her candidacy, I'm signing up to work for her. Simon is going to war with Olivia's Army.

And we WILL crush the monstrous Fordzilla... 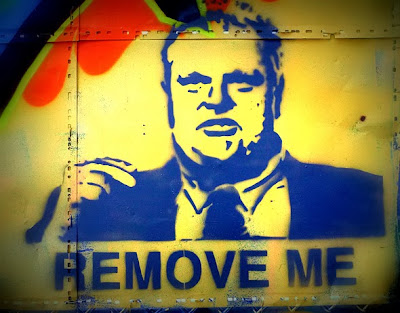 We will destroy him politically and personally, we will show him no mercy, we will humiliate him, we will remove him from office, and drive him back to the hell or the crack house he came from.

I promised my mother that, and I promise you that Canada.

We are are going to teach that grubby Con and his depraved fellow traveller Stephen Harper a lesson they will NEVER forget. They might force us to live in their foul Harperland, but they will never make us as grubby as they are.

And I also told my Mum this eh? To make myself feel better.

He never fooled me for a moment.

From the minute he came to office I knew who he was, and portrayed him accordingly.

Not a mayor, not a leader. Just a bully, a bigot, a dirty man. 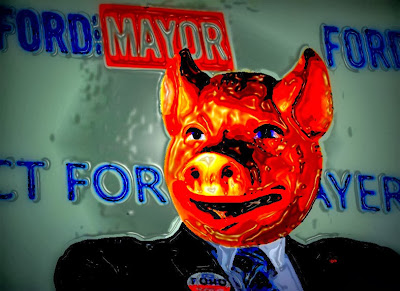 I couldn't agree with you more Simon. I'm so sick of these con thugs - they are ruining our country, as well as our good reputation, Good Lord, Ford has even been 'featured' on Dr. Drew AND Jane Velez Mitchell! They are more than an embarrassment - they are the worst representatives our country could ever have and I truly hope to see them both in jail cells, along with most of their C.R.A.P.!!

it is always important to remember that when we are attempting to remove people like Ford, we do not use their methods or we will become like them.
Ford's regarding the reporter not so unlike those of Vic. Its trying to bounce the ball back into the other guys court so he is on the defensive, People will wonder, Trust me, Ford isn't finished with this line of comment and there will be people who buy it. He is attempting to frighten away people who criticise him. It may work.

Should Ms. Chow run for Mayor of Toronto, here are best wishes. But please don't be depressed or discouraged should she not be successful. Living in B.C. I've seen what the voters can do .Just remember the line Tommy Douglas used about resting for awhile...

Hope Chow runs and then is totally humiliated. Ought to be funny to lefties tossing themselves from buildings after that. Oh boo hoo, tell me that won't actually happen.

Fuck you, you lousey nazi right-wing fuck! I hope you're available for traction the next time my car gets stuck in the snow and your kids too!

I wonder why anonymous Cons always use the language of schoolyard bullies. When I was little, they called me a "leftie". Nothing to do with politics. Back then, left-handed people were still a bit "different".

Note that the verb is missing from bully's second sentence. He also forgot the mandatory ethnic slur, and the reference to the supposed subsidized dwelling in a housing co-operative...

hi cheena…yes, the Con thugs have really done a job on our country, and between Harper and Ford it's going to take a generation to undo the damage to our reputation abroad. It took a long time to build it up, and only a few years to demolish it. Meanwhile….polls show that Canadians are prouder of their country than any other people on earth. I'd hate to be the one who has to deliver the bad news...

hi e.a.f….don't worry, there is no danger of becoming like Ford. He's one a of a kind. But when I talk about whupping Ford I mean democratically, with every poster or attack ad I can throw at him. Also polls show, and have shown for a long time, that if Chow runs she will beat Ford handily. So relax and watch the show it will be a good one… ;)

hi anonymous 1:42 --- as I just told e.a.f., every poll ever taken shows that Chow can beat Ford. So I'm afraid it's going to be the right-wingers who will be jumping off the CN Tower. I must remember to avoid it, or wear a hard hat just in case. It's going to be a messy spectacle, especially when Mayor Crack Head takes the plunge. But as gory as it might be I'm sure I'll enjoy it…. :)

hi lagatta…Cons are always bullies. Their ideology dictates that they impose themselves on others. And they will find any excuse to try to marginalize and exclude people. But you're right our Con needs to brush up on his grammar AND his talking points. If he's going to repeat them like other Con sheeple then let's have the real Harper !!!!

Rob Ford has shown all of us how important it is to pay attention. We let him happen.