The Con War on the Canada Pension Plan 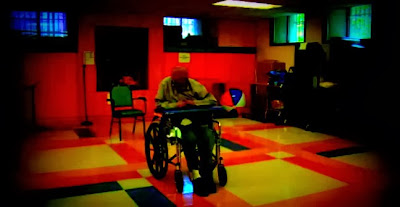 It's my nightmare vision of a Con jungle. A country full of seniors living in poverty and misery.

A country where the old and the poor have no present, and the young have no future.

A nightmare that became even more real today, when the Cons killed an NDP proposal to expand the Canada Pension Plan.

Even though a recent study showed that Canada is the only OECD country where seniors are getting getting poorer, and the government is doing less and less to help them.

And the only good thing I can see, is that some seniors are finally starting to fight back.

Conservatives are losing support among Canadian seniors for refusing to expand the Canada Pension Plan, warns a national seniors group. On the same day that the Conservative majority voted down an NDP motion calling for CPP expansion, the seniors lobby group CARP released a survey showing Conservative support is slipping among its members.

Finally starting to starting to realize that Stephen Harper is their enemy not their friend. 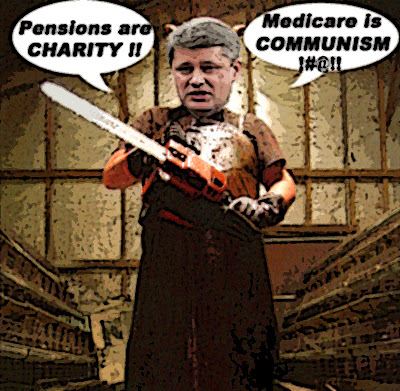 “He does not like the Canada Pension Plan, so I believe that as long as he is the Prime Minister of this country, no time will be the right time for any infinitesimal increase in CPP premiums and benefits,” he said.

A political thug who would put his foul ideology before the needs of vulnerable Canadians, and is trying to dismantle a social safety net that took generations to build.

From the unemployed to low-income families and poor seniors, more people than ever are struggling with grim choices as they try to cope in the leaner, meaner Canada presided over by Prime Minister Stephen Harper. Since winning power eight years ago next month, the federal Conservatives have chipped away at programs that helped define the compassionate, caring Canada built over the course of several generations.

And what really makes me see red, is the Con claim that expanding the CPP would be a "job killing payroll tax" and that they are only trying to protect the interests of younger Canadians.

When in fact expanding the CPP would have a minimal effect on the economy, and it would benefit young workers not punish them.

Contrary to Mr. Robson’s contention that young workers will be most at risk from CPP expansion, such workers will, in fact, be the largest beneficiaries. Current retirees would gain nothing, since they would not be paying any additional premiums, and older workers would gain only limited benefit increases based on their few years of higher contributions. Young workers would be paying higher CPP premiums over their entire working lives, and thus would stand to get the full increase in CPP benefits.

Not just because most young workers have low paying jobs with no benefits, no pensions, no anything.

But also because judging from all the ones I know, they would support any plan that would allow seniors to live in dignity. Not only because it's the right and Canadian thing to do, but also because they too will be old some day, their future has never looked bleaker.

And the Con proposals to replace the CPP with voluntary savings plans, or so called pooled pensions plans, are nothing but a scam.

Critics of CPP expansion proposals have not offered any viable alternative to increase the retirement savings of workers. Voluntary saving schemes – including workplace pensions and RRSPs – have shown their growing inability to address the problem. Nascent pooled registered pension plans, also voluntary, will do little better. All the empirical evidence suggests that only a mandatory increase in workers’ savings will address the problem.

About as good as relying on a Lotto 649 pension plan.

And are only designed to throw us all into the hands of the greedy private insurance companies who are circling Parliament hill like vultures. And make them richer while making most of us poorer and less secure.

Yup. The other night I wrote about the growing threat of a generational war, something I totally reject since I don't believe in pitting one group of Canadians against the other.

Now here's a chance for young and old to work together, stand up for our precious social safety net, and OUR Canada.

And send those miserable Cons, and their deranged leader, to the jungle they would have us live in.

Or the hell where they belong… 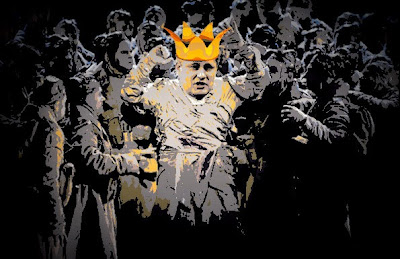 .. well .. Nigel Wright is back at Onex .. and managing the Canada Pension Plan funds .. good to go y'know ..
Let me know if you need links to that story Simon .. He might do a great job..
but how Onex got positioned .. mmn .. and the timing ! ?
And such similarities to the Kellie Leitch story .. perfect positioning and timing as well ...
And the spying on environmental advocates by The National Energy Board, RCMP & CSIS
all under the smokescreen of Lord Ford of Etobicrack


Canada now meets all 14 requirements of a fascist state. The only reason that state sponsored violence and prosecution of the intelligentsia is not occurring in every city, town and province in Canada as seen during the USSR days in the east bloc, is because of the general apathy of the population makes it unnecessary at this time... But its obvious that G20 proved that even that is not beyond the reach of this dictatorship. 2015 will be to late, not only because history proves that the radical right never gives up power but also the actions and rhetoric from the fascist party of Canada make it clear they have no plans to cede control, nor could they as then their true actions would be revealed by the succeeding government and they would be found to be what they truly are. We are not becoming a fascist state, we ARE now a fascist state.

I often wondered as I was growing up (always did have a tendency to ask unorthodox questions) how could someone like Mussolini or Hitler rise to power within a democratic nation, how could such radical ideology which only benefits a few and brings suffering to so many could become established in a system that requires consent from the electorate. How come the other parties and political figures of the time, not only the general populace, allowed that to happen to what was essentially their nation as well. Over the years I did get those answers, and it saddens to see it occurring in my own adopted home as well... We are living through history in the making, but I'm afraid it will be the kind of history that mankind will in the future try to forget, such as all other fascist rises to power of the past.

This blog brings the whole sordid history of Harper and his political consorts to light: http://harpercrusade.blogspot.ca/2010/04/preface.html

its not surprising that they actually do indeed have the same roots as the other mentioned fascist dictators. These are grave times, the gravity of which I fear is not fully understood by the many. All our safeguards have failed, I fear for our future and the future of this nation.

Stevie slime will do nothing to improve CPP, even if it were proven it would help the country and be less expensive in the long run. If seniors do not have enough money to survive, it will be the problem of the provinces. His raising the pensionable age to 67 will only mean many will have to rely on provincial welfare should they be unable to work. It certainly has taken long enough for there to be less support for the Cons. What did those people think? the Cons didn't care about the living conditions of children, seniors, or anyone living on First Nations reserves in the North. What made people of other origins think Stevie slime would care about them? Jobs with decent retirement plans are becoming fewer and fewer.
the cost of living is becoming higher, with no commensurate rise in income. People will not be able to save for retirement, on their own. Once the generational wealth the working/middle class has been getting by on, is gone, we will sink into a very large poverty stew pot.

Without adequate pensions people will not retire. They will need to continue to work. There will be no jobs for younger people and the social unrest will begin. we have only to look at what has happened in Greece and the riots which followed. We can only hope Stevie slime is gone after the next election, but I'm not holding my breath.