Last night I ran this latest production from the Con Ministry of Propaganda and Disinformation, to make a point about Stephen Harper's Big Oil agenda.

But tonight I thought I'd take a closer look at that ghastly ad to see what else we might learn.

And I must admit I was shocked eh?

Because that frothy video isn't just bad propaganda, or the political version of one of those phony pipeline ads, or a quasi fascist ode to a megalomaniac.

Starting with that picture, where he poses outrageously as a Prime Minister and delivers this outrageous line:

Seven years ago we set out to rebuild Canada strong and free.

When in fact Canada didn't need rebuilding until he broke it. And after seven years of his monstrous government the country has never been weaker, more divided, less free, and more of an Orwellian prison state.

A cesspool of corruption presided over by a shameless political thug… 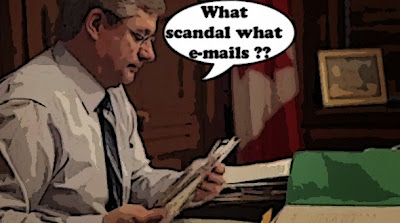 A scam artist and a compulsive liar who also also has the nerve to say this in that ad:

We are proceeding on the conviction that we must live within our means.

When he took a $14 billion dollar surplus and turned it into a $50 billion dollar deficit. So that he could use that as excuse to kill government. Even as the Con regime spent our money like water on all kinds of porky vote buying schemes.

The final, official price tag for shipping Prime Minister Stephen Harper's armoured limos to India in 2012 is in and it's even higher than previously thought.

And who can forgive the way he uses pictures of himself with Canadian soldiers in that phony propaganda video...

After the way he has betrayed them.

Or pumped up the military, only to blow it up.

"If all the other things are untouched because you don't want to reduce the number of people, because you're committed to equipment, then you're going to savage the operations and training piece of it, which means that soldiers won't train, sailors won't sail and men and women won't be in their aircraft very much."

While portraying himself as the warrior leader of a strong nation, and an example for the whole world.

Because for good to happen in this world someone must speak up for these values. And have the will and the capacity to act.

It is our purpose that Canada must be great…We must be a country of hope and an example for the world.

When in fact thanks to him and his filthy Con regime, Canada has never been less great, or more diminished in the eyes of the world.

Most decent countries now consider us a pariah nation...

And not once in that phony video does Harper mention climate change, the greatest threat the planet faces.

For the most obvious of reasons.

Canada is once again delaying emissions regulations in the oil and gas sector, despite major pipeline projects that continue to put intense scrutiny on the energy industry’s environmental track record.

Or the most CRIMINAL.

But he will pose as a friend of children…

Even as he ignores their poverty and their hunger.

And he will pose as a friend of seniors….

Even as he steals their pensions and their mail service…. 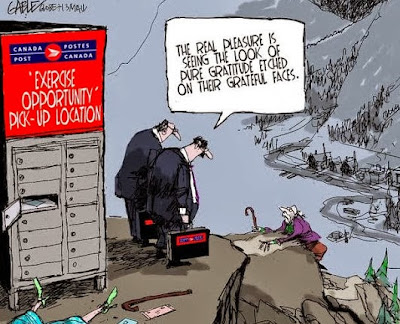 But then what do you expect from a Con artist like Stephen Harper?

We must make sound long term decisions. And reward those who work hard and play by the rules.

When everybody knows the Harperite cult can only think as far as the next election, and how they can buy it or steal it.

The list of Cons who play by the rules is much shorter than those who don't...

Sooner or later Great Scandalous Leader is going to have to explain why he didn't know what was going on in his own office. When everybody else did.

And nothing in that phony video is going to change the impression most Canadians have of him. As the worst and most depraved Prime Minister of the most morally corrupt and scandalous government this country has ever known.

One who can't get the boot, or be jailed, soon enough.

Which is no doubt why the video ends with Harper practically begging for his job...

And only when it is those (great) things, and Canada is all it can be. Only then can I say our work is done.

Because that's all that video is eh? A pathetic plea for more time in power, from an increasingly desperate leader.

And a shot across the bows of those who would replace him.

But it's all in vain. He will not escape his scandals, he cannot escape himself. Or his bestial record.

He can make all the videos he wants.

And his ghastly rule is almost OVER... 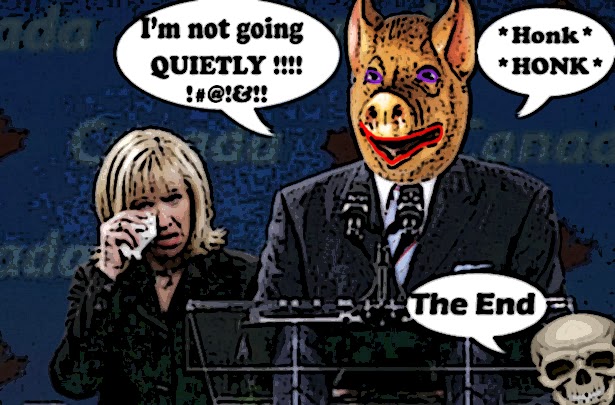 Harper is a Fascist Dictator from way back. We don't even know, how much of Canada is left? Harper has given Communist China our resources, resource jobs, our Canadian farms, 800 hectares at Prince Rupert, that is where Red China is building their LNG plants. China also wants the 18 mines and timber, on Vancouver Island. 300 Canadians were laid off, at the tar sands. Harper's foreigners are being given their jobs. Same with the Northern BC mines. Thousands of Chinese are being given those jobs too.

Harper has also, signed a deal with the, Communist China Army. Harper's stacked panel, gives the evil Enbridge permission to build the Enbridge pipeline. People think there will be, jobs, jobs, jobs. However, Petro-China put in a bid, to help build the Enbridge. That pipeline began building the Enbridge, long before Harper's stacked panel, gave the go-a-head. Harper is also giving Communist China, a massive resource project in our High Arctic. Harper doesn't need a military in Canada, he has China's Army. Don't even think, Harper won't turn that evil army on us either. Harper knows exactly how much he is hated. Harper is your typical coward. He is paranoid about, someone will try to kill him. I am happy to know? Harper will have to watch his back, for the rest of his life. Harper's henchmen will have to watch their backs too.

Harper scripted phony interview was laughable. Someone should have asked Harper, our crime minister? If he wanted some cheese, with his whine?

I have lost faith in this country.

No matter what you say, Canadians elected harpo, and for that I can't forgive them. Canadians are as stupid as the citizens of Louisiana. What does it matter, it's too late anyway!!

Harper is a fascist pig.