Rob Ford and the Day of Revelation 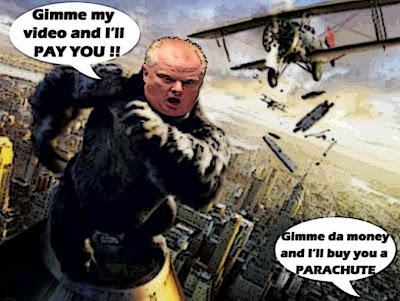 Well yesterday he was looking for any camera he could find to try to keep his face in the news.

But tonight he was hanging on for dear life and dodging the media, after police documents finally revealed the true heart of the Rob Ford scandal. Not just a mayor out of control.

But one at the mercy of CRIMINALS.

A trove of police wiretap evidence replete with allegations of extortion attempts, threats and boasts of numerous photographs of Toronto Mayor Rob Ford using illegal drugs is revealing the extent to which the mayor’s behaviour exposed his public office to criminal elements.

In one instance detailed in newly released information from a nearly 500-page police affidavit, Toronto police surveillance of the Dixon City Bloods gang picks up talk in one telephone conversation in which two alleged gang members discuss how they were offered a car and $5,000 for a video that they believed could fetch $150,000 from the media. Police say in the document they believe that offer for the video was made by Mr. Ford.

A man who may have used heroin, hung out with dangerous gangbangers, and was willing to do ANYTHING to try to save his reputation... 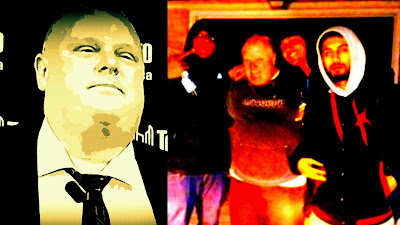 In a wiretap one month later of several telephones, gang members discuss the mayor’s missing cellphone, which Mr. Ford lost while at a suspected crack house on April 20. The mayor’s friend and then-occasional driver, Alexander Lisi, retrieved the cell from an alleged gang member in exchange for an unspecified amount of marijuana, the police information alleges.

And the only questions that need to be answered now are, when will Ford resign, why hasn't he been arrested?

The latest revelations about Mayor Rob Ford have prompted calls for Toronto police to explain why no charges have been laid against the mayor.

“I do think the people of Toronto should be given a bit more of an explanation from the chief,” Davis said. “I think any ordinary person who participated in this kind of activity, if it’s founded, would find themselves in very serious trouble.”

Where are his friends when he needs them? 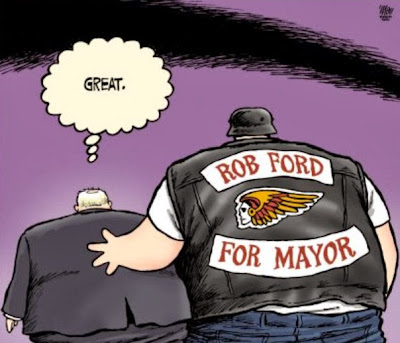 What will the Ford Nation think about these latest allegations? Will they CRACK up or will they SMACK themselves stoopid?

How many times must the Fordzilla fall before he can't pick himself up?

And of course when is enough ENOUGH?

And the only sure thing is that Stephen Harper is going to wear this scandal until the day he too is driven from power... 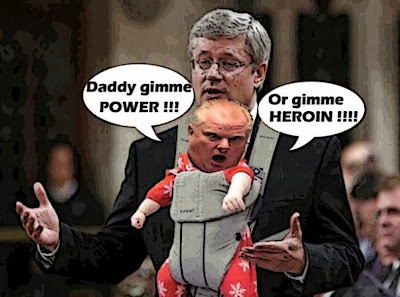 Because we really do have that redneck bully bigot and his ghastly buddy exactly where we want them now.

And for all those like me who opposed Rob Ford from the moment he took office, especially the reporters from the Toronto Star who never gave up trying to expose him for who he really was, how sweet is this moment of vindication.

Charge him, jail him, remove him from office, and from the sight of all decent people.

Get that foul Con thug outta there... 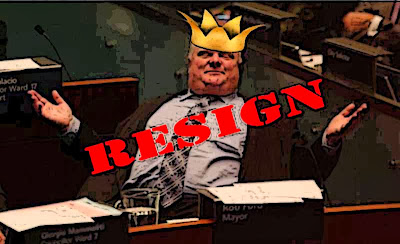 Before he disgraces himself in an even more disgusting manner.

I wonder what a FOIA request to the PMO for their files on Ford would reveal about when and what they knew while they still promoted him as a strong ally and friend.

Yeah I wonder what will happen if the Fordster resigns? He won't be there to lower taxes so that his voters can have extra money for the purchase of illegal drugs!

Too late for that. he is an international disgrace to Toronto and Canada and even the 'murkans look down on us because of him. "This isn't Toronto" as I seem to remember the quote when another druggie mayor was arrested in the states recently. Nice!
If Blair won't arrest him, then he's going to be around and doing whatever the fuck he wants for a long time. You or I or any everyday Joe would be safely ensconced in the greybar hotel by now awaiting arraignment and/or trial on a myriad of offenses but, for some inexplicable reason, the frodzilla is immune from Blair's "justice". WTF? And why is Blair in that position if he arbitrarily dispenses "justice" at his own discretion? Isn't the law still the law and, allegedly, inclusive of us all, regardless of who we smoke crack with or bribe with 1.5 kilos of "kush"? At the risk of sounding redundant, W.T.F.???

I think. Harper and his good buddy Ford, would make excellent cell mates

hi Waldo...hmmm..I hadn't thought of that one, but I like it eh? We should definitely bombard them with FOIA requests, until the full horror of what they have done is exposed for all to see. And of course, once they are evicted from power we should commission an exhaustive investigation into the whole record of the Con regime, to see if we can get any more of them thrown in prison. In the meantime, we should waste no opportunity to remind Canadians of the close links between Ford and Harper. So for example when Great Ugly Leader starts going on about his insane Great War on Marijuana, we can just laugh and say: Don't CRACK me up and tell that to Robbie... ;)

hi anonymous...Gawd. I hadn't thought of that one. I am going to have to think about that one for a while. Especially since I have been urging the Ford Nation to smoke all the crack they can in solidarity with their junkie leader. I would never forgive myself if their taxes we raised and they couldn't afford it... :0

hi anon...well he certainly is a disgrace. I read somewhere that in Amerika he has generated more headlines and media coverage than any Canadian in the last CENTURY, with the possible exception of Justin Bieber. OMG. Lord please take me I can't stand the embarrassment anymore. As for Blair and the police I must admit I am a bit troubled by the situation. But remember their investigation is continuing, so it's not over until it's over. There could still be some stunning developments, Ford and his posse are not out of the woods yet. And in the meantime that ghastly gorilla is still twisting in the political winds, or withering on the vine. I don't really care how we destroy them, as long as they go down and don't get up...

hi gingersnap...yes that that would be only fitting. And I'd like that a lot. I would try to smuggle booze and crack into their cell, so the Fordzilla could could consume them all, and go absolutely WILD...;)

Rob Ford was elected by not justt those who live in what we once knew as Toronto but by the suburban cities which were independent of Toronto. You may find the problem in there. Rob Ford still enjoys support and will continue to do so. If he is not arrested, convicted, and jailed you could be seeing him re-elected. Remember, B.C. re-elected the lieberals.

You can not handle the truth.
Rob Ford is a Hero of the ZSRDF