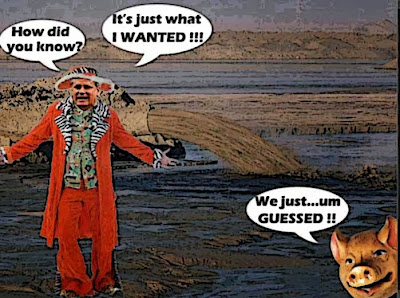 Well I see Stephen Harper got an early Christmas present, courtesy of the Big Oil gang at the National Energy Board.

A polarizing debate over the proposed Enbridge Northern Gateway pipeline heated up Thursday after an independent panel from the National Energy Board recommended the federal government approve the pipeline with conditions.

Because he needed something to cheer him up eh? And now the scam is on, and the fix is in.

The final decision still rests with the federal government, which has 180 days to respond to the report.

At least judging by the way oily Joe Oliver reacted to today's developments... 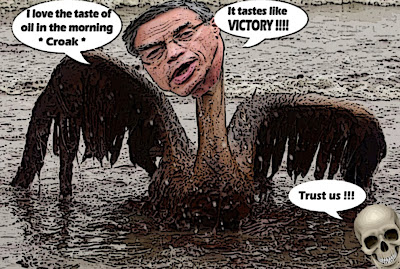 In a statement, Oliver said the panel's report represents "a rigorous, open and comprehensive science-based assessment."

"Our government will continue to improve the safe transportation of energy products across Canada. No project will be approved unless it is safe for Canadians and safe for the environment."

When in fact no amount of conditions will change anything. The oily guck cannot be transported safely. The Enbridge gang will never convince us that the Rocky Mountains are just a snowy hill... 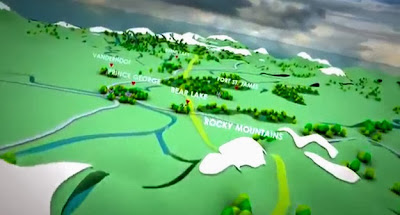 Or that the Coast Mountains are just a little hump, or that the Douglas Channel is just a  tranquil duck pond... 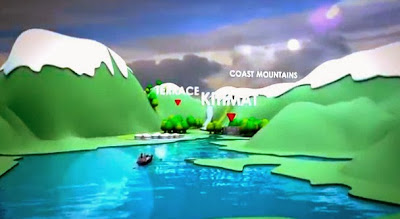 Instead of one of the most treacherous bodies of water in the world.

Or that they can clean-up what can't be cleaned up, or pay for what is PRICELESS.

Just like the Con oil pimps will never convince us that the uncontrolled expansion of the oil sands is safe for the environment, when it's Canada's major contribution to global warming, humanity's greatest challenge.

But then of course, neither can I forget how the Enbridge gang reacts to anyone  who dares challenge their rosy view of the Northern Gateway project…

And how they tried to muzzle the guy who made that video.

A veteran B.C. political cartoonist says his newspaper has backed down in a fight with one of Canada's largest energy companies over a spoof of an advertisement.

Because whatever they say, or whoever they try to muzzle or buy, nothing can change the fact that it's just a monstrous scam to sell as much of the oily guck as they can, before the world moves on and the demand for it dries up.

You know, an increasingly desperate attempt to seize the moment.

Which strangely enough, or not, just happens to be the title of Stephen Harper's latest propaganda video...

Which even resembles one of those phony  pipeline ads, and should remind us that the man and the Big Oil agenda are now ONE.

And that he will  say or do ANYTHING to impose that Big Oil agenda, and scam Canadians into voting for him.

And the good news? He will not get away with it. The people of British Columbia will make sure of that.

Massive protests and court challenges based on native rights are likely after a National Energy Board decision that gave conditional approval to the Enbridge Northern Gateway pipeline, say First Nations, environmental groups and others opposed to the project.

“If this project is approved by Prime Minister [Stephen] Harper or his successor, I plan to join the blockade with my family at the Alberta border,” Victoria City Councillor Ben Isitt said on Thursday, shortly after a joint review panel (JRP) released its report. “Tens of thousands of citizens, I expect, would put their bodies on the line.”

And they will not fight alone.

Support the people in BC.

Save the country, save the planet.

Put the pimp where he belongs… 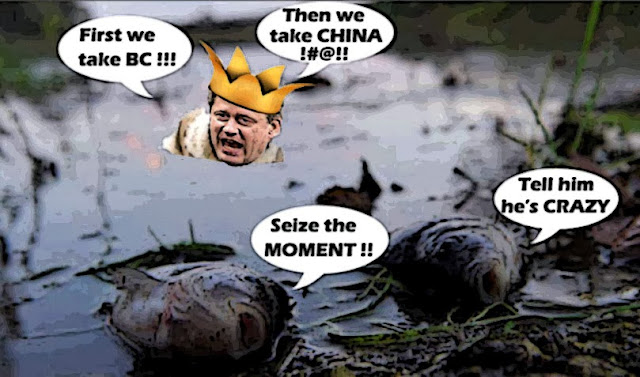 Our federal government (Stevie), the NEB, the RCMP and CSIS think it was A-OK and perfectly legal to spy on, surveil, invade the privacy of, collect 'intelligence' on, and brand or smear anyone or any entity concerned about the development of the Northern Gateway diluted bitumen pipeline and twin condensate pipeline to Alberta.

Go and look at the whales, seals, shorebirds, wild salmon, wolves, orca, shellfish, eagles, bears in BC
Go see caribou, wolverine, grizzly, wolves, crows in Alberta.. or polar bears & ptarmigan in the arctic
Why ? Because they will never be seen again except in zoos.. or on the web
Does anyone in our government really think orca can withstand sonar blasts, no wild salmon to feed on and thousands of Chinese supertankers and accompanying tugboat transits thrashing through the Douglas Channel?
Oh, right.. we'll have world class navigation rules.. just like the Harper Senate

I am so disgusted ..I weep for Canada and Canadians..I am so angry.. and ashamed
I am Canadian .. I shall not abide .. as these disgusting pimps try to trash Canada

Enbridge is dead, a rotting corpse...And Stephen Harper has run out of time.

I have to laugh at Joe Oliver's statement about rigorous science. I followed the JRP pretty closely. I gave an oral submission when it came to my city (the pipeline will cross the river that partly supplies our drinking water), and I am part of a group working on research and education regarding the project. Hundreds of actual scientists gave evidence that the project will deliver negative impacts to the ecology of the corridor in the immediate and could potentially deliver catastophic damage. The NEB says that damage is of no consequence in the face of the financial gains to Canada. Rigorous science indeed. Flawed economics is more like it.

I read your blog every day and give thanks for your thought provoking insight and wonderful sense of humour. Thank you for hanging in there, when you so often came close to shutting it all down in despair.

2013 has been one of the most interesting years in Canadian politics in what seems like decades. Can't help but feel that 2014 is going to be even better - especially for Canadians who love this country and detest what has happened under our current government. I rather doubt 2014 will be a banner year for Harper. The Senate scandal, amongst other things, will NOT go away and nor should it. It's also time for the Robocall situation to come back to the forefront. That affront to our democracy can not/should not be allowed to be swept under the carpet.

After 10 years of living in BC, my husband and I are moving back to Ontario in January. The first thing on my 'to do' list is to pay tribute to Jack with a visit to the 'bicycle' monument.

Wishing you and Sebastian a wonderful holiday season and continued hope and success in 2014.

Harper signed a deal with, the Chinese Communist Army. That is what it will take, to force through the Enbridge pipeline into BC. The NEB are just Harper's evil henchmen. As if we would ever believe what Harper's stacked NEB panel said.

Everything Harper touches is corrupted. Harper's stupid scripted interview, will be the joke of the century. I couldn't even watch it, I was so disgusted. Harper is a Fascist Dictator from when he was Policy Chief, for his Northern Foundation of 1989. From that? Make no mistake, Harper is a very evil excuse for a human being.

Do those Cons really think we believe them? If they do, they are only Conning themselves. People know a pipeline will be the end of the environment as we know it. People will protest. It will not be pretty. The protestors will not just be "the tree huggers" but people you would not expect to see. There are an awful lot of "retired" people in B.C. Some of us were active when we were young in anti nuke protests. How nice it would be to have just one more good wack at things.

Simeon, I don't know where you get the idea's for stevie slime's outfits but I must congratulate you on them. They always make my day. I love them. Merry Christmas and Happy New Year! Thank you for all your work on this blog. The blog is one of my daily happy moments, the pictures are so good!

hi salamander…very eloquent and poetic. And I just love the image of the Plague Ship Harper, sailing through his netherworld corrupting everything he touches.But the good news is this: once so many were complacent, now so many are angry. Because he is a clinical psychopath he can't understand the depth of that anger and disgust. But sometimes it even scares me, and sooner or later it will destroy him...

hi Grant…very nice. Dead in the East and in Quebec, tainted in Ontario, cruising for a bruising in BC, running out of time, and heading for oblivion. Couldn't be better for us, couldn't happen to a more ghastly leader...

hi karen…yes I thought Oliver's comment about rigorous science was hilarious, worthy of a snake oil salesman. Muzzle the scientists, praise the science, and then ignore it. The Cons are absolutely shameless and the worst government ever. Good for you for speaking out and trying to defend your city. With that kind of spirit, you can't lose...

hi Wendy…thank you for your kind words, Yes I have had my moments of despair, I do wear my heart on my sleeve. But I have promised myself to keep blogging at least until the day the Cons are driven from power, and the support of readers like you makes it a whole lot easier. I'm glad you''re moving back to Toronto, and Jack will be waiting for you. I took a picture of the statue the other day looking even more beautiful and even more Canadian in the snow .
And thanks for your holiday wishes. Seb and I both wish you and your family the same, and all the best in 2014….

hi anon…yes I too could not bear to watch the year end interviewee gave to Global TV, while ignoring the CBC or CTV. I think I have reached this year's maximum dose of Harper, and will have to wait until the new year before I can safely expose myself further… ;)

hi e.a.f…..I think the Cons have reached the stage when the only thing they believe is their own propaganda and are now drinking their own bath water. For I too am pretty confident that if he tries to impose his pipeline on BC he will pay a heavy price.
And I'm glad you like the outfits I dress Harp and his Con clowns in, I'm hoping to unveil a whole new line in 2014, although the Ikea monkey's sheepskin coat will always be my favourite. ;)
Thank you for your kind words, and for being such a faithful reader. And Merry Christmas and a Happy New Year to you and your loved ones.,...