Stephen Harper and the Decline of the Con Regime 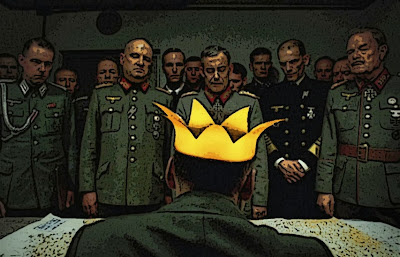 They say he is holed up in his bunker at Harrington Lake surrounded only by his closest advisers.

The small band of PMO fanatics who never say no to anything he says, even when he's rolling on the floor biting the carpet.

Or in an alarming state of total DELUSION...

2013 has been a very productive year. RT if you agree that we're on the right track. #cdnpoli pic.twitter.com/PCeSG2buXN
— Stephen Harper (@pmharper) December 16, 2013


But of course even his faithful fluffers can't conceal the ugly reality. It wasn't a banner year, it was Stephen Harper's anus annus horribilis, and his situation has never been so desperate.

Support for Stephen Harper’s Conservatives is lower than it’s been at any time since they came to power in 2006 (the November average of public polls is 28% and that number is trending downwards.)

His polls are tanking, the Senate scandal is engulfing him, the police are at the gate, his iron grip on the caucus is loosening, the troops are growing restless.

In the wake of the Wright/Duffy affair, the hub-and-spoke command structure has broken down — few are prepared to take direction from a Prime Minister’s Office that has been so discredited.

And to make matters even worse the leadership candidates are fighting each other, or spreading nasty stories about their rivals... 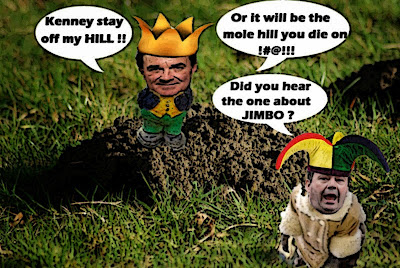 Whispers are spread about this minister who has a fondness for the grape and the grain; or that one, who is acting out because he doesn’t like his new job. Others say this minister is insufferable after a promotion; or that one is deluded in thinking he will be Prime Minister.

Or calling themselves "bitches."

This past week, Conservative MP Kyle Seeback apologized for calling fellow Conservative Brad Butt a "bitch" during a loud exchange on the Commons floor. "It was more like a locker room than the House of Parliament," one witness said privately.

So you know The Abyss can't be far off eh?

And it's not surprising that some in the media are wondering whether Stephen Harper can even survive his banner year. 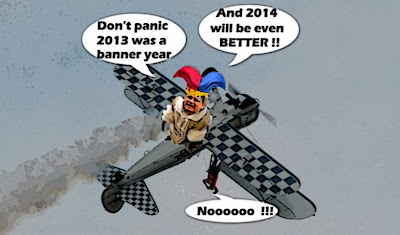 Will 2013 be remembered as the beginning of the end of Stephen Harper's Conservative government? Or will it mark the low point from which he mounts a comeback?

It is becoming increasingly difficult to envision the latter scenario, in part because even some Tory MPs are openly — if anonymously — talking about a future without Harper as party leader.

Especially since he now has the reverse Midas touch. And for a control freak like Harper this must be unbearable:

Worse, with the Senate scandal in the hands of RCMP investigators, Harper has no control over how events will unfold going forward.

It must drive him absolutely CRAZY.

And of course the big question is will he stay or will he go?

My guess is that he's now so deluded he will fight on to the bitter end, like Der Leader in his bunker, even if he takes the whole Con party down with him.

But it is also getting hard to imagine how he can visit Israel in January, the only country that still loves him, with the possible exception of Colombia.

Get a hero's réception… 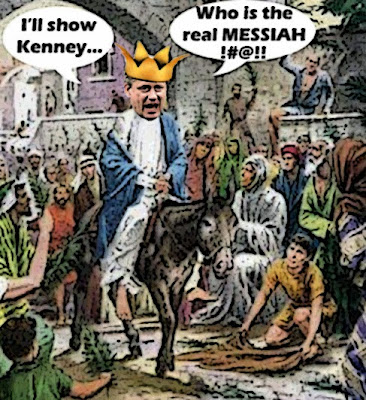 And then return to Canada to face the sordid Senate scandal again, and all the Cons who want his job.

Because if he was going to resign that would be the time. If the Cons are to hold a leadership race and the new leader is going to have a chance to heal the damage. Or plug the holes in the sinking ship.

This past year blasted a hole below the waterline in the Conservative ship of state. If it isn't plugged soon, it will sink them.

Oh well. Only Great Desperate Leader, and his psychiatrist, and his Wonder Boy Ray Novak, know what he is planning or plotting.

And neither Ray or Steve are talking eh? 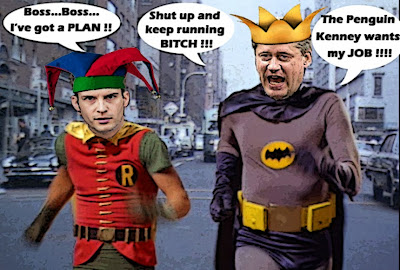 But what I do know is that I'm feeling pretty good about the situation. I understand how many good progressives can sometimes despair.

As I sometimes do myself.

But what I would say to all of them, and all of you, is cheer up, enjoy the holidays, because we've come a long way baby.

2013 may have been a brutal struggle, but it was OUR banner year.

The Harperite cult has been hammered.

The Con ship is sinking.

Our ship is coming in to take us back to the country we once knew...

Or take Simon home for Christmas.

We are heading in the right direction.

The universe is unfolding as it should.

Alberta gets a billion more Ontario more than a half a billion less, thats fairness, out with the cons. Oh and yoiu wil not hear about this on talk radio
http://www.theglobeandmail.com/news/politics/ontario-says-ottawa-broke-its-word-on-health-transfer-at-cost-of-300-million/article16004374/

We really have no idea of how much of Canada, Harper has signed over to foreign countries? We know Harper has given Canada's resources, mostly to China. China refused to pay Canadian wages so, Harper permitted them to bring, their own cheap labor. Canadians working at the oil patch were laid off and Harper's foreigners, are being given those jobs. Our Canadian farms are also being given to China. There will be dead pigs floating down Canada's rivers, as they do in China,

Same thing in BC, thousands of Chinese will be given the mine jobs in BC. 200 Chinese miners were given, those BC mining jobs. China paid for 800 hectares at Prince Rupert. That is where Communist China are, building their LNG plants. China also owns BC's NG. China also wants the 18 mines on Vancouver Island, they also want the timber.

Because, the BC Liberals work for Harper? The destruction of BC, is being done behind the people of BC backs.

We are living in very evil times. The corporations are demanding cheap labor and we all know Harper works for those, bottomless pits of greed corporations.

With just a little luck, Spring/Summer 2014 will bring some artful FIrst Nations demonstrations outside Buckingham Palace and the UN. London and New York are so nice in May . . .

We can only hope Harper doesn't have a come to jesus moment in Israel. He needs to stay on as the Con leader or they could win the next election, just like the B.C. LIEberals did. people hve such short memories. On the other hand this Canada Post thing may have the electorate going postal on the cons. Many out at their corner mail box might just keep going until they get to the polling station and be willing to vote for any body but Harper. At the rate things are going, Ms. May could wake up find herself P.M.

hi Steve…yes I saw that story and will write about it soon, because it could mark a decisive turning point in the war against the Con regime. Because Ontario is so big and so diverse it rarely acts like a province. But if the Cons poke the sleeping giant and it wakes up, they could lose enough support to cost them the next election...

hi anon…yes it's true, Stephen Harper's ultimate objective is to take us into a low wage country so we can better be exploited by Big Oil and their friends. But the good news is that more and more Canadians are beginning to realize where he would take us, and the backlash will help destroy Harper and his gang...

hi Edstock…yes I too am hoping that the Spring and Summer of 2014 will be a hot one. Hot enough to toast Lord Harper like a bagel, and set us free at last...

hi e.a.f….actually I'm hoping that Lord Harper does have a Jesus moment in Israel. So I can dress up in a sheet, appear to him in his sleep, and convince him that he must remain in Israel, or The Messiah won't return…. ;)