Stephen Harper and the Disastrous Decline of the Harper Regime 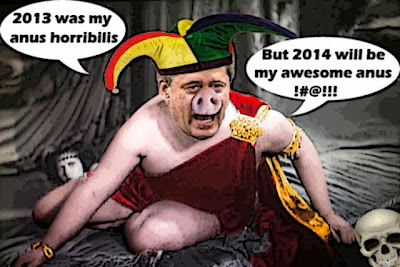 Well there is still a day and a half left in 2013, but it looks as if Stephen Harper is going to make after all.

Crawling on all fours. With his reputation in tatters.

Support for Prime Minister Stephen Harper’s government is dropping sharply, according to a new poll showing a majority of Canadians believe the country is headed in the wrong direction.

The Nanos Research poll also shows 56 per cent of people rate the government’s 2013 performance as “somewhat poor” or “very poor,” a far higher share than the poll had found in earlier years. In particular, 44 per cent of respondents in the Prairies said the government’s 2013 performance was “very poor,” signaling unrest in the Harper Conservatives’ backyard.

And heading in the wrong direction.

In the Mood of Canada survey’s seven-year history, this year’s results set new lows for the government – 55 per cent said Canada is headed in the “wrong direction,” while the poll had never shown that figure to be higher than 38 per cent.

Another 38 per cent said government had a “very poor” year, more than double what the poll had ever shown. And 45 per cent said Canada’s reputation was “not improved” internationally this year; eight per cent said the same a year ago.

Which does explain at least why so many Canadians are walking around dressed like this.... 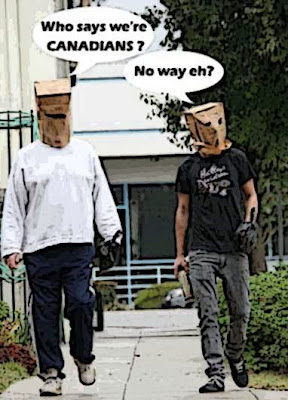 And of course it also finally explains why Stephen Harper looked so ghastly in his Christmas Message... 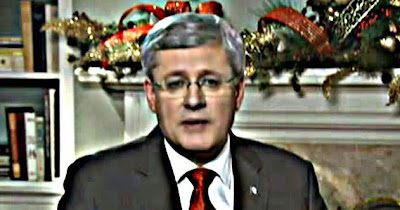 Like a man on the verge of a nervous breakdown.

The Senate scandal differs from previous controversies in that it directly implicates the Prime Minister, who has been tasked with personally defending his handling of the issue, pollster Nik Nanos said.

“There was always a bit of a buffer. This year was the first year where the Prime Minister was very closely associated with the controversy, specifically the Senate controversy,” he said. “...I think we can now mark 2013 as the year that Stephen Harper’s personal brand took a hit.”

And the best news? It's not going to get any better. Not with that sordid scandal waiting to damage him further when he finally makes it back to Parliament.

If the police don't arrest him first.

Yup. The writing really is on the wall.

Or on the ground eh? 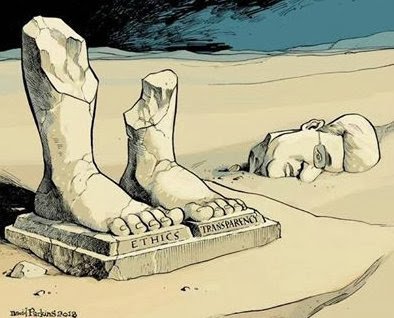 His reputation lies in ruins.

another scandal, pray tell. O.K. save it for the new year. it will be a surprise.
Not only are the scandals hurting/helping the Cons, but unemployment is rising in Ontario. As more people become unemployed and social safety nets collapse, people will become unhappier and unhappier. The manufacturing sector in Ontario has taken a terrible hit. there is no sign this is going to improve. There has been no alternative offered by the Cons. Their tax cuts have only plunged the country into a huge deficiet situation and now, to "balance" the budget, they decide to cut more programs. As this continues, it will effect more and more Canadians. S?tevie just didn't know when to stop. Now perhaps the voters will stop him.

Like you, I want to see the Cons defeated in the next election. But you can't count them out, especially when the election is still 2 years away. Most polls had BC's NDP cruising to victory over BC Liberal Christy Clark, but look what happened there. Strategic voting needs to occur in the next federal election. For example, if you normally vote NDP, but the Liberal candidate has the best chance of defeating the Con candidate, then vote Liberal. For the last 3 elections, the progressive votes have been split in many ridings, and the Con candidate came up the middle and won the seat.