Rob Ford: The Mock Satanists and The Movie 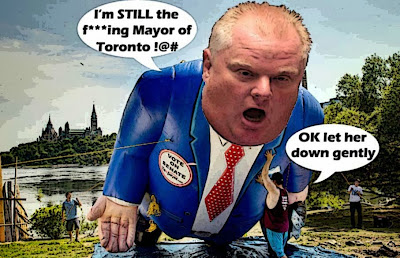 Golly. Because I've been so busy trying to stay on top of the Senate scandal, I haven't been able to write anything about the continuing adventures of Rob Ford.

But they are continuing. And it's still a horror show.

Even though the Fordzilla can't seem to understand that he's only the mayor in name only.

Except when he's trying to explain why he's always getting his picture taken with the wrong kind of people.

“I take pictures with every single person that wants to take a picture with me. So if they put it up on the website what can I do? I wasn’t aware that I was taking a picture with the Hells Angels,” Ford said.

Or joining his brother Doug to chase away the Rob Ford impersonator and the mock satanist bus tour. 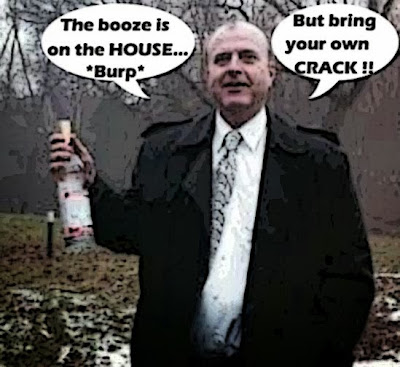 Coun. Doug Ford filmed, followed and called the police on a Mayor Rob Ford impersonator Sunday afternoon, accusing him of “stalking” the Fords’ mother — a charge the actor calls “ludicrous.”

The “Rofo Bus Tour” was set up by Cloven Path Ministries, a shock comedy group of self-styled Satan worshippers. McKay was hired to wait on Weston Wood Rd. in a Volvo he borrowed from one of the Cloven Path members. When the tour buses arrived, he would stumble through the adjacent Douglas Ford Park — named after Ford’s late father — acting as an inebriated Mayor Ford.

So now the mock satanists are looking for a new van and a new driver.

“We had to cancel tour five on Sunday, because our driver had become so apprehensive about the police presence and the nature of our ministry,” Wilkes explains. “You gotta remember: not everyone understands that we are an evangelical Satanic outreach. They associate us with yesterday’s devil, with the sacrificing of the family pet and the mutilating and the road kill. We don’t do that sort of thing! Today’s devil wants you to hold a position of high influence, wealth, and power.”

And Rob Ford is no doubt looking for a new photo opportunity. Because he's desperate to keep his face in the news eh?

There are only so many football games he can attend... 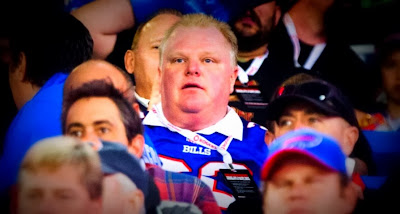 Only so many ways to meet the Ford Nation.

And since he lost his power, his radio show, and his television show, he's been forced to lower his sights.

Toronto Mayor Rob Ford is heading to YouTube, and will relaunch his Ford Nation program online before Christmas, according to his brother, Coun. Doug Ford.

And the good news? Rob Ford really is the mayor in name only.

And Chris Farley came back from the dead and made a movie about him...

Oh well. Chris Farley would have been great as Rob Ford.

But in the meantime I'm still waiting for Olivia Chow to announce she's running for mayor.

So I can go work for her.

And we can end this Con nightmare once and for all... 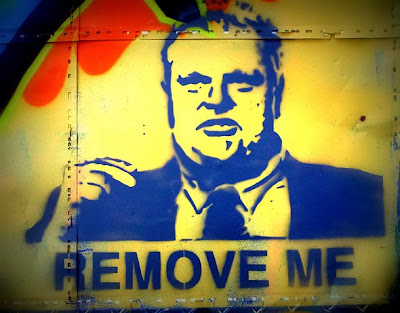 Labels: Rob Ford, The End of the Ford Nation, Toronto

But in the meantime I'm still waiting for Olivia Chow to announce she's running for mayor.
Boy, do I EVER hope you're right about that one! Imagine that! Somebody who's educated, refined and actually not grotesque in appearance to represent Toronto to the world instead of this doughboy monster and his gang-banger enforcer brother to further embarrass our city and our whole country. WHAT A CONCEPT!!! WHERE DO I SIGN UP TO HELP HER?

Olivia Chow is a good M.P. There are those of us in other parts of the country who want her there. Now of course it is understandable that some may want her as Mayor of toronto, however, given the current size of Toronto and the suburbs are conservatve, she may not get elected. The people of what used to be Toronto may want her, but it would appear the old Toronto was a little left and the surrounding areas were a whole lot right. That is most likely why Harris made it one big city. Lets leave Chow in parliament. Simply get the current provincial government to undo the mega city and Toronto can once again elect on of its own. Not some person from the burbs, not that I have anything against the burbs, but they have different interests than the urban centre. Simply having a councillor is not enough in a sea of burbs.

hi anon...Olivia is my MP so I have supported her for years, and as you probably know polls show that she could beat Ford in just about every situation. I don't know why she's keeping such a low profile, but she doesn't have to declare until January and she probably just wants to keep doing her MP business until then. When she does declare I'll let everyone know where to sign up. Let you I can hardly wait for that moment, Toronto deserves better than someone like Ford...

hi e.a.f... well as I was just explaining, all the polls show that she is THE candidate to beat Ford, and that support extends into the suburbs, even though she is very much downtown Toronto. And with Simon at her side, sweeping the floor of her office, how can we lose? ;)

hi Sam...thanks for the link to that video. It made me smile and shake my head. If I hadn't seen The Fordzilla show with my own eyes, I never would have believed it. And when my mother, who lives in the north of Scotland told me "your Mayor is on the television here a lot" I practically fainted with embarrassment. What has that monster done to us?

well, there is that. If Ms. Chow runs, good for Toronto, good for you. Living with the loose of a good M.P. will have to be something to work on. On the other hand perhaps you could give up the sweeping job and run for M.P. YOU KNOW, its a career change and you'd have a whole new audience.