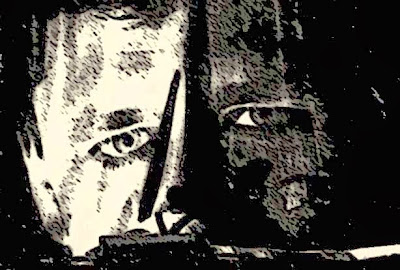 He invited world leaders to his G20 summit, and then allowed the Americans to spy on them. He had his CSEC agents spy on the Brazilians.

He has just unveiled a Trojan horse cyber-bullying bill that would allow police easy access to our so-called metadata, the records that internet service providers and phone companies keep on our every call and email.

And now I see Stephen Harper is taking his Big Brother tendencies to a whole new level, with a plan to monitor our social media.

Tweets, public Facebook posts and YouTube videos could soon be subject to round-the-clock scrutiny by the federal government, a procurement document posted this week by Public Works and Government Services Canada suggests.

The federal government is seeking a firm that "continuously monitors social media content on a daily basis in near real time and (can) provide web-based, online media metrics and reporting capabilities."

Because he can't find out enough about us eh? He needs to know who else to add to his long and sinister Enemy List... 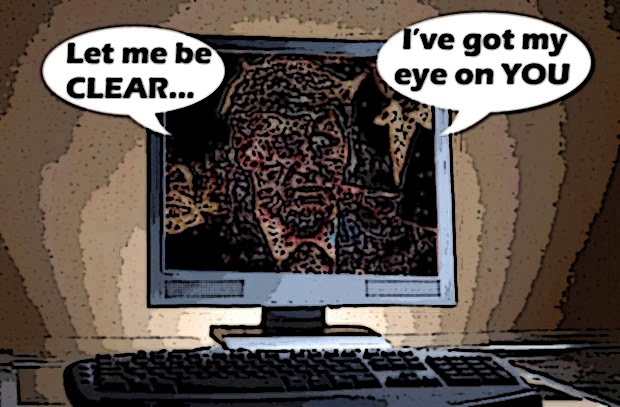 The document specifies that the contractor must be able to provide the service 24 hours a day, seven days a week, 365 days a year. Part of the job will be to gauge the sentiment and tone of posts and to determine their reach.

And I don't find this at all reassuring.

Digital public affairs analyst Mark Blevis of FullDuplex.ca said it's not unusual that a government would want to know what people are saying, although he concedes some might find that thought disconcerting.

"On one level, there is a creepiness factor to this," Blevis said in an interview. "But then on another level, it's open data, it's open information. If it's publicly accessible, why should the government have any less privilege accessing it than anyone else in the public eye? "

What they do with it is going to be the big question."

Because that is the big question. And I can't help wondering whether this extensive and expensive undertaking is designed for the general benefit of the Canadian people, or the political benefit of the Con regime. 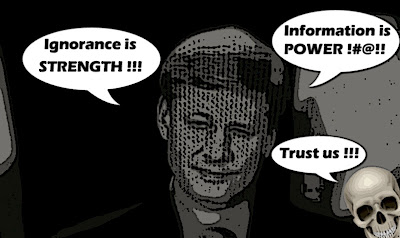 Or his depraved desire to try to intimidate his opponents.

Just like I can't help wondering how far he is prepared to go to turn this country into a surveillance state.

Ellen Richardson went to Pearson airport on Monday full of joy about flying to New York City and from there going on a 10-day Caribbean cruise for which she’d paid about $6,000. But a U.S. Customs and Border Protection agent with the Department of Homeland Security killed that dream when he denied her entry.

“I was turned away, I was told, because I had a hospitalization in the summer of 2012 for clinical depression,’’ said Richardson, who is a paraplegic and set up her cruise in collaboration with a March of Dimes group of about 12 others.

Or wonder even more ominously whether CSEC, which is prevented by law from spying on Canadians, is using the Americans to get around that ban?

Oh well. As a long time opponent of Great Ugly Leader, I have long assumed that everything I write is being monitored. It doesn't scare me in the least. No Con ever could.

And the only thing that concerns me, now that I know that we're ALL going to be monitored, is how hard will I have to work to try to standout from the pack, and make it into the top hundred thousand on his Enemy List ?

Because that would be a bigger honour than getting the Order of Canada eh?

And of course, how can I make it even CLEARER how I feel about him and his foul Con regime? 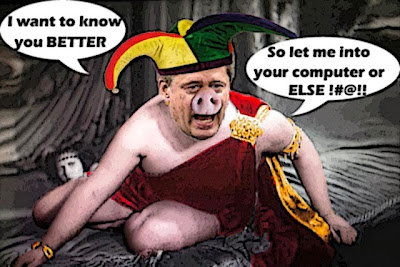 Because that won't be easy eh?

But it will be worth every bit of extra effort. Because the thought of Stephen Harper actually reading one of my posts first thing in the morning, and blowing coffee out of every orifice, is a thought I relish eh?

And if he doesn't find my blog posts, or my Twitter feed sufficiently irritating.

May I suggest he start with this video...

Because let me be clear, as Great Big Brother Leader likes to say.

With all the ammunition he's given us recently, I'm sure he will find the new batch of videos I'm working on even MORE annoying.

Although the message will be the same.

Or we unite and work harder than ever to defeat that deranged leader and his sinister totalitarian regime.

Or we really will wake up one day in an even darker place. 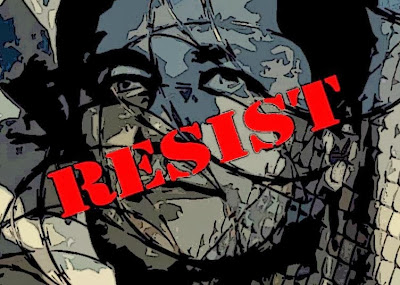 Simon! You gotta ask Mulcair to put your vid on during his election campaign and at the end he says "I'm Tom Mulcair and I approve this message". How cool would that be, eh?
We have to get Mulcair on the TV more often. It's good to hear a political leader who can actually speak up to the masses instead of like a 10th grade dropout who makes you feel like your underwear need changing every time you hear him speak. Even his CON clowns are looking pretty slimed in the images you see of them in session looking at him these days.

.. perhaps at some very early point.. diapered in the sandbox with his toy soldiers and dinky toys, cowboys and indians.. an 'event' happened.. a shaping 'core experience' .. got his first GI Joe ?? Saw a Barbie doll? - Fast Forward to west Toronto & high school 'Reach For The Top' smartypants - Fast further Forward to the shallow and callow western mailroom clerk.

We know Harper suddenly abandoned his adulation of Pierre Trudeau, shifting to tea party style immersion courses in the US of A .. thin intellectual gruel for such a smarty pants as him. Then came the dim and dull Alliance & Reform & finally.. the chance to fleece Peter MacKay for the near dead 'Conservative' brand.. and the rest is recent prorogued PMO history, election fraud by one unknown perp.. omnibus 'budget' bills, a growing partisan herd of toads and dark personalities. How about that new Ambassador to Jordan !! Neither a diplomat nor a salesman.. but a security wonk.. or spy.. Bring in Investment Broker Joe Oliver from Bay Street for Resources, Peter Kent, a faded weak journo for Environment, and a host of other disposable diaper, bizarre political stooges.

And hey, my droogies ! Let's stage a review by The National Energy Board of The Northern Gateway Pipeline.. but not until Ray and Jenni and Nigel can get the spy network of First Nations elders set up.. and we can sell much of the mineral leases off to China.. so the indians can't fight it! Get Arthur Hamilton to shape a legal strategy that will take 10 years to unravel..

Meanwhile.. and I mean 'meanspirited' .. actually, in every sense of the word.. The Harper Government strategy is 'let's spend every cent we can 'to know what people in Canada are thinking' .. or aware of.. or unaware of .. get inside their wool heads or mainstream media& Unleash the Economic fake Action Plan.. that will take a year or so to be revealed as complete nonsense.. and lets spy on Brazil & Canada some more

Has this 'government' been spawning (paying for) political polls to further manipulate the electorate ??
That would go hand in glove with media analysis.. and 'grooming'.. of voters, populace, electorate, media..
and electoral fraud

Remember that word, Simon ... 'Grooming' .. in every despicable way imaginable ..
See it as a tactical and premeditated and calculating graduated assault on Canadians ..
paid for by those same Canadians being assaulted !!!

After all.. that's how this Harper Government functions ... thinks.. feels
There are no rules except 'winning', no glowing hearts.. no standing on guard for anyone or thing
Its all about building a barricade of complete idiocy & denial around Harper and his PMO
.. and if they get caught out.. well.. they've already blown up the country
and sold it off to the highest corporate or foreign government anyway..

hi anon...thanks for the nice thought, but I'm afraid not. I'm almost too embarrassed to run this humble video on my own blog, let alone embarrass Mulcair. I will get better though. I was finally able to save up enough money to buy a new computer and a slightly more sophisticated video editing program. So now all I need is the time. Gawd. But yes Mulcair has been doing a good job in Parliament. But the NDP needs to get their message out beyond the House of Commons. Both opposition parties should be making YouTube videos to frame Harper in the leadup to the next election. I don't know why they haven't being doing that. It doesn't cost much money, and unlike yours truly I'm sure they have both the equipment AND the talent.... ;)

hi salamander...I'm glad you brought up Harper's Reach for the Top episode. The day smarty pants was humiliated by a kid named Dino Zincone.

It's one of my favourite stories, after the one where he went to work for Preston Manning, thought he owned the truth, until he found out he didn't. And then picked up his marbles, and went back to Alberta,
suffering from "nervous exhaustion" or ego depletion. Since then of course he has reverted to the same pattern, aided and abetted by his pathetic flunkies who lick him like a lollipop. New ego depletion crisis coming up soon... ;)

Great news Simon, to every action there is an equal and positive reaction, get busy help create free broadband free from Harper.
http://thinkingaboot.blogspot.ca/2013/12/the-greatest-thing-ever-to-happen-to.html

i hope he and his buddies see my activity

Part of what they will do is install con trolls on every dissenting blog voices in Canada be prepared for the onslaught prior to the upcoming election, trace 'em ferret 'em out and publicly humiliate them.

hi Steve...interesting post. I love the idea of our own networks. But let's face it, if the ISP's don't give them the information, the Permanent Surveillance Machine will get it anyway. Expect to see a drone disguised as an Amazon delivery vehicle, hovering over your house. And by promoting such a subversive idea you have no doubt attracted the attention of the NSA spooks. So I don't know you... ;)

hi Oemissions...well I for one would be honoured to share a prison cell with you. We'll keep it warm and civilized until the Cons take our place...;)

hi anon...yes you're absolutely right, with Jenni Byrne running wild in the PMO, and the whole gang in a state of agitated desperation, we can expect them to try anything. And no doubt their cyber warfare unit will be reactivated, to try to intimidate their opponents, and steal the next election. Good. We've got so many mouse traps set all over the place, they're bound to step on one.... ;)

In any marketing strategy, time is of essence; the message has to reach the market fast enough for them to be able to buy the product the moment it’s released. To do this, the marketer needs to have the required market and also the means of spreading the word. Mustering the numbers to spread the message can be a very hard thing to do.
But with facebook fans who can do so for you, this can be one of the easiest ways to achieve this objective. With facebook profiles fans available for purchasing, this can be the boost your business to increase product awareness and also sales.
Buy facebook fans