Is Stephen Harper About to Pay for the Senate Scandal? 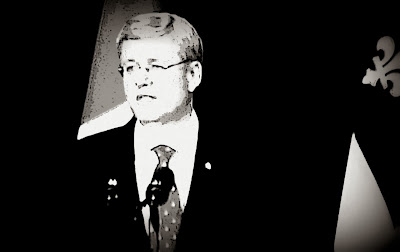 Well now we know why Stephen Harper has been looking so pale and so fearful. Or just so pathetic.

Because he just may be about to start paying for that sordid Senate scandal.

The federal Liberals maintain a lead in three of four ridings up for grabs in Monday’s byelections, according to a new poll from Forum Research. Liberal candidates lead their opposition by more than 10 points in Toronto Centre, the Montreal riding of Bourassa, and the Manitoba riding of Brandon-Souris, according to the poll.

And while two of those ridings are considered safe Liberal seats, the riding of Brandon-Souris has traditionally been as Con as they come.

Brandon-Souris should have been a Tory cakewalk. It’s a riding the Conservatives have held for all but four of the last 60 years, one they won with nearly two thirds of the vote in the last election, one few expected to turn into a messy, neck-and-neck throw-down after backbench MP Merv Tweed resigned suddenly over the summer.

And losing it would be a devastating blow to Stephen Harper. One from which he may not recover.

For not only would losing a seat to Justin Trudeau's Liberals just about KILL him. 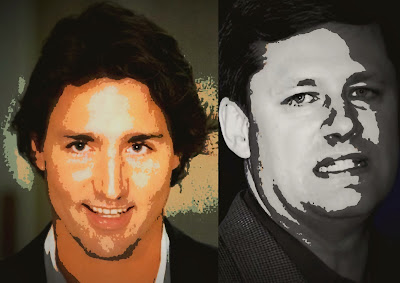 Or HUMILIATE him beyond belief.

Especially after the way Great Ugly Leader and his Cons have tried to smear Justin.

Conservative candidate Larry Maguire has mailed out flyers claiming Justin Trudeau would make marijuana more available to kids and slagging Liberal candidate Rolf Dinsdale for playing in a punk band with a raunchy name. Those were followed by an unusual letter from Prime Minister Stephen Harper dropped in mailboxes all over the riding that begged voters to elect Maguire instead of Dinsdale, who Harper said returned to Brandon only to run.

It would also be seen as a barometer of things to come. An indication of how much the Senate scandal is hurting him.

And it would almost certainly cause massive unrest in his Con caucus.

And contribute mightily to Jason Kenney's crusade to replace him... 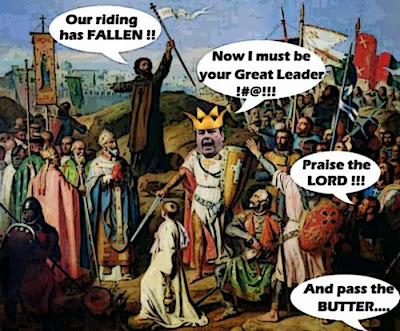 Of course, I don't trust any polls these days, especially ones in Con ridings.

So I'm not going to break out the champagne cheap plonk just yet eh?

But we just might be seeing the beginning of the end of Stephen Harper.

And won't that be a beautiful movie? 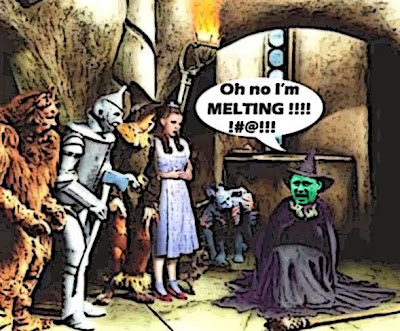 Another Konclicated n devient tale.. of the last ludicrous daze of the stern fiscally impossibly concerned Knights of Felonious Harper, besworn n betrothed yet virginal.. servient to Jobs & Hight Accountability & the PMO pensions.. dutifully swerving & muttering under the incredible magestical shrinking pie minister of Carperland & the True Ruler of all fish & lobster habitat, conquerer/seller of the dread fracklands, best friend of the vast leaky tar sands.. ruler of the 'Great Base', friend and lifelong ally & on th Board of Directors to Communist China.. and Israel too.. ruler impotentate of the Great Harper North, strong and freaky with invisible evangelistic snowmobiles .. where the polar bear & hungary Orca swim endlessly.. seeking ice or jettisoned caucus members .. or plump partisan Senators

We little wee salamanders have little tiny cups o coffee .. n gather round our one little celphone to read your marvy soothsayings.. evry morning.. hoping for the day, you know.. when the wicked witchever, Harper is carried away.. mebbe by a foul wind

As I said the other day, harpie and his criminal cabal go by the 'murkan reTHUGlican playbook and that means a convenient miscounting or disappearance of votes that clearly would have allowed the librocons to win over the CON-cons. Happens in Florida and Ohio all the time, Simon and harpie's boys aren't snoozing at the wheel about these things. Karl Rove wasn't up here just for the snowboarding a while back, ya know!

We need to focus attention on the whole conservative agenda and corruption, not just Harper. The way we're going, by making him the cause of all that's bad in the Con Party, when he is gone the slate is clean for the next guy.

Tossing Harper for Justin would he just more of the same, if you look at Justin's political leaning he's very much to the right.

No the important fight is in Broussa and TC, where hopefully the NDP defeats the Liberals, and in the process kills Trudeaumania and the full focus returns to those actually doing the work, the NDP where Tom is destroying Steven Harper.

James is quite correct. We saw it in B.C. We have a new leader, all is well. It is the whole lot of slimers who have done this to our country. If the cons jetson stevie slime and elected a new leader, all the blame will be laid at his feet and the next one will continue the work of stevie. All of the Cons who supported Harper are on the hook for this one. There are back benchers who will never see the front row, yet they sat through all of it. They didn't say, we can't take this anymore, we are sitting as independents. As the old saying goes, if you are not part of the solution, you are part of the problem.

In B.C. after the lieberal win, many asked me how I felt about the it. My response, I voted NDP, you voted for more child poverty and overcrowded schools.

hi salamander...thank you for another of your wonderful comments, in your inimitable style, which make me chuckle and wonder whether I should make my writing more exciting. ;)
Although I must really question one of your statements. Could anything and anyone in the Court of the Knights of Felonious Harper STILL be virginal? I doth have my doubts. It all looks shockingly debased and spent like a used rubber. And I'm afraid we will not be able to melt the Harperion regime by throwing a bucket of water at it. It will require something a little more muscular, like a police intervention.
However we will require many buckets of water to clean-up our Parliament, so shoulder your mop like a good Canadians, and we're off to see the Wizard... ;)

hi anon...considering the high state of agitation in the Harper cult, and the apparently deplorable state of their support in Brandon-Souris, I fully expect the Cons to pull every dirty trick in the book to try to win that by-election. In fact I wouldn't be surprised if Pierre Poutine is called back to action, from his refuge in the Caribbean. We really should not hold any election in this country without enlisting a small army of foreign observers, but hopefully the good citizens will keep their eyes open, and call the police if necessary....

hi James....I agree with you, we do need to keep our eyes on the whole Conservative agenda, because these Cons are so brazen they will use their own crimes in order to pull a fast one on us. As their Trojan cyberbullying bill proves. But remember, if Harper goes it will set off a fratricidal struggle in the Con Party that may well fatally divide it into its original component parts. Because Jason Kenney may think he is the chosen Messiah, but most Canadians won't share that view, and neither will many Conservatives of the more decent kind. So it will be very hard for any new leader to make a clean start, and we shall feast on their confusion...

hi anon...no I don't believe that anyone could be as bad as Harper, because it's not just his policies that are a problem, so is his character. And whatever you think of their policies, both Trudeau and Mulcair would be better than Great Ugly Leader. The rot must be stopped, before we can rebuild the Canadian house. As the election approaches I will focus more on the policies of both progressive parties. But right now all I want is for the Cons to be gone...

hi e.a.f...I tried to answer this in my reply to James. But as you yoursef point out, so many other Cons must share the blame for the actions of this foul regime, just changing the leader will not be enough to redeem them. I'm pretty sure that Canadians will throw out the Harper baby, or changeling, and th bath water....