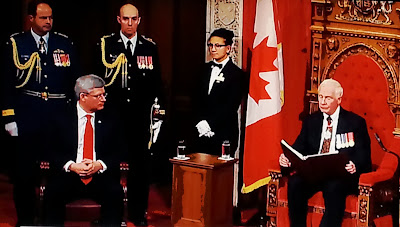 It was a Throne Speech as small, as uninspiring, and as politically depraved as Stephen Harper himself.

A speech that must have made the poor Governor General feel like running home and taking a shower.

A grubby little speech with a toxic teabagger heart.

The federal government says it will bring in a law forcing future governments to have balanced budgets during "normal economic times," freeze its operating budget and reform the way the government manages spending, Gov. Gen. David Johnston said in the throne speech Wednesday

A plan to further strangle government right out of the Republican handbook. Buried in an extended Porky Action Plan ad, stuffed with empty bragging about the Con regime's economic record, jingoistic baloney, and doggy whistles to its rabid base.

From a man who would rail against sick and defenceless drug addicts, recycle his demagogic law and order agenda, but make no mention of climate change.

A Botox treatment gone bad, as John Ivison called it. From a ratty regime too tired and corrupted to do better.

If this is Harper’s idea of Seizing Canada’s Moment, as the Conservatives ads trumpet, the party is reaching out with an exceedingly weak grip to grasp the future. Its absence of vision is matched only by its lack of ambition.

And is just playing for time.

The Harper agenda as outlined in this throne speech is to squeak through a bruising fall session in Parliament, pray for a robust turnaround in the American and world economy, and hope that our own growth picks up, along with the Conservative poll numbers, before the government has to face the voters again. It’s a political play for time, not a vision for the future.

Hoping to distract Canadians from the Senate scandal with a frothy foam of chintzy promises... 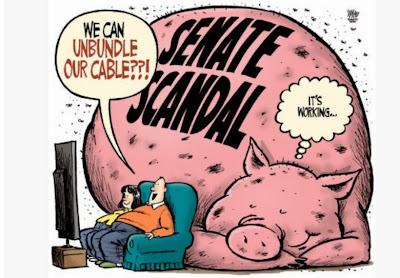 Promises which apparently no longer include an Airline Passenger's Bill of Rights. No doubt after the Cons remembered at the last moment what Pierre Poilievre once said.

And didn't want to see their little attack dog neutered in public, or remind Canadians that they stole that idea and all the others from the NDP.

Which only tells me that the Cons are making it up as they go along. Or just desperate.

After eight years in the Ottawa bubble, has the Harper government lost touch with the country? All indications would suggest it has. Confidence that the country is moving in the ‘right’ direction has reached new lows. Confidence in the stewardship of this government is lower still.

At the same time, Prime Minister Stephen Harper finds nearly two-in-three voters disapproving of his job as PM and his party has shed over one-third of the supporters that provided the Conservatives a majority in 2001.

These poll results not only cast doubt on whether Harper can recapture a second majority — they raise the spectre of the Conservatives not even winning Official Opposition status.

Because their polls are tanking. They will not escape the Senate scandal. The economy will not lift them.

Prime Minister Stephen Harper prides himself on his handling of the economy. His economic skills are cited time and again as reasons for voting Conservative...But five years into the Great Recession, it is a mantra that is wearing thin.

And no matter what he says or does, Stephen Harper will never lift his party like he once did. Not when after eight years, so many Canadians are sick and tired of him. So many hate him so much. Time is not on his side.

And he is THE PROBLEM.

He will of course refuse to accept that brutal reality, his ego being so large, his grip on reality so fragile.

So he will soldier on like a cyborg, until he becomes so unpopular even his docile caucus revolts, his government falls apart. 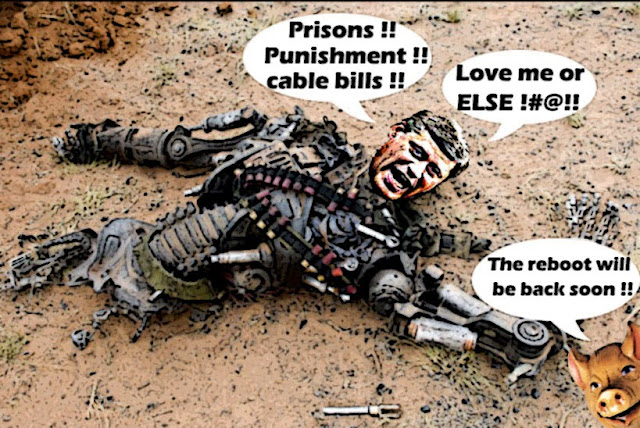 For NOTHING can save a man who is his own greatest enemy.

And nothing in today's Throne Speech will save his rotten government.

We will attack him like he must be attacked, of course.

But his days are already numbered.

And in the end he will destroy HIMSELF...

Simon, the rethuglicans in 'murka haven't downsized their version of goverment at all. If anything, it grew to enormous proportions under the shrub, moreso than even ronnie raygun grew it. They say they want to downsize government but, in fact, they only metastasize it every time they are in power and their version only increases the number of sycophants and cronies that suck the blood out of it which is exactly the game plan anyway.
I don't see the Canadian taliban here doing anything different. harper, and the ford syndicate for that matter, has more lobbyists in Ottawa now than at any previous time in recorded history and they are being moved into Senate positions to hide their true function which is to turn our government into a monetary/political puppet show just like we've seen to our South. The only good news is that it seems like some of the voters here are starting to come out of the ether about this rat bastard and his crime cabal. Let's hope it's soon enough and in enough numbers to kick that fucking rube and his godless rabble out of Ottawa before they can do any more damage. Happy Thursday and don't take any money with harpo's face on it! It's just as phoney and worthless as he is! Cheers!

Good grief, how I cannot stand the Harper Con degenerates, most especially Dickhead Poilivre and the dud speaker Andrew Scheer. Why can't that asshat cut off the off topic HoC 'debate?' Like EVERY time a Con slime is asked a question about the Duffy scandal, they deflect, refuse to answer and then veer off topic straight int bullshit-land to rant about make believe carbon taxes and make believe attacks about pot and Trudeau. Why in hell isn't that dick brained speaker saying 'off topic' and cutting these shitheads off?

hi there...it's true the Cons have built up their government machines, especially the Department of Propaganda and Disinformation. But their ultimate aim is to kill government, and as the great Kevin Page warned us, their cost of living freeze will cost thousands of jobs in the public service every year.
And buried in all the manure of this phony Throne Speech, there is also the threat to sell off or privatize public assets which could mean bad news for the Post Office or Via Rail, or even the CBC.
But as you point out the good news is that more Canadians do seem to be waking up. So hopefully the glorious day of Liberation is not that far away. And don't worry, I would never try to pay for anything with money that had Harper's face on it. I'd be too afraid I'd be arrested for FRAUD.... ;)

hi wazz...I know how you feel. The very sight of the Cons these days sickens me to my stomach. It's like really bad Kafka. Or watching a cult in action. How they can lie so blatantly...like Harper going on about the nonexistent NDP carbon tax in the speech to his Caucus...and behave so outrageously is something I still can't quite believe. I fear we could be numbed to it, and start accepting it as normal.
I think that's what keeps me blogging these days. The need to standup and shout; This isn't just wrong, and immoral. It's absolutely INSANE...