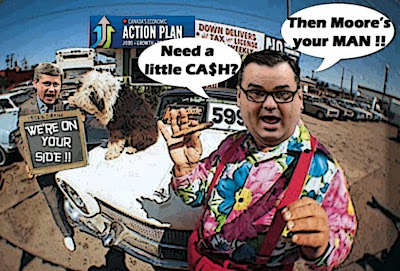 Uh oh. I see the Con regime is now so desperate to try to distract Canadians from the sordid Senate scandal, they're cooking up a whole new scam.

They're dressing up as consumer advocates, and sending out James Moore to flog their new/nouveau porky plan like a used car salesman.

In an interview with CBC News, Industry Minister James Moore confirmed the upcoming speech from the throne will lay out a consumer-first agenda.

"You can be assured that the measures that we're going to take on roaming, on not forcing Canadians to pay for television channels that they're not interested in watching, un-grouping television channels for example. All of these measures taken together will absolutely put money in the pockets of consumers," he said.

Because they want you to believe that they're on YOUR side eh?

"We are not the party of the big business. We are the party of the middle class. Through tax relief, through protecting consumers, and we're going to continue in that direction with the throne speech and with our fall agenda," Moore said.

Even if it means lying like thieves, or stealing ideas from the NDP that the Cons have always opposed.

Twice the NDP has tried to get airline passengers protected and failed — in 2009 and 2011 — and the move has been firmly blocked by the Conservatives.

So Stephen Harper can press the reset button on his tired old corrupt government, try to soften his image by reinventing himself as a virtual cash machine... 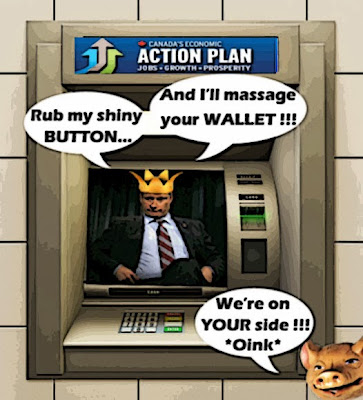 Reduce politics to a vulgar transaction.

And then accuse the opposition of being obsessed with scandal, and of trying to stop him from putting money in the pockets of Canadians. Because every toonie counts eh?

Of course it's hardly a new idea. Just a logical extension of the consumerisation of the political scene that Susan Delacourt has written about here.

An attempt to distract voters with shiny baubles, and try to put lipstick on the dilapidated pig of the Con regime. Just another scam to dodge the Senate scandal, like the prorogation ploy.

The Conservatives’ shutdown of the House of Commons was not aimed at clicking the reset button but rather at avoiding questions over the Prime Minister’s ethical lapses, say the NDP.

NDP House Leader Nathan Cullen has been negotiating with the Government House Leader Peter Van Loan and says the Tories are trying to reinstate all their old legislation in one sweeping omnibus motion – ensuring their bills remain at the same stages they were at before Prime Minister Stephen Harper pulled the plug on the last session.

Gawd. Can you believe those filthy old hogs, and the nerve of the porker Van Loan? 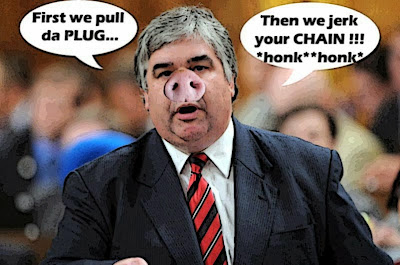 They want to pull the plug and EAT IT too??? Oinky. Oinky.

And the good news? This shiny new scam almost certainly won't work. Anything the Cons offer probably won't be enough to satisfy consumers. The opposition can remind Canadians they could have had that money or that airline protection YEARS ago if the Harperites hadn't blocked them.

And Tom Mulcair's right, the sordid scandals of the Con regime WILL come back to haunt them.

"You can't reset corruption, you can't reset lies. We know what's been going on in the Senate. Answering Parliament's questions, answering the public's question, that's part of the job description whether Stephen Harper likes it or not," Mulcair said.

They will taint everything they try to do. Make them look cheap, sleazy and almost certainly even CRIMINAL.

So the opposition can ask would you buy ANYTHING from a grubby gang of Con artists like that one? 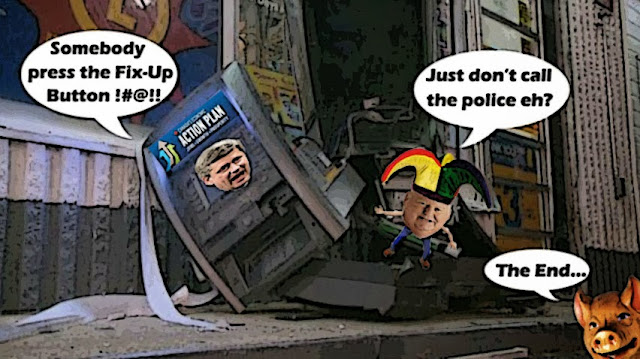 Or would you rather vote for us and/or call the authorities?

Yup. You know what I think eh? I think the Cons are desperate. I think they'll try anything, and nothing will work.

After so many years we finally have the Cons where we want them. We're going to hit them until they SQUEAL.

And then we are going to TRASH them...

What a crock of shit. Not your post, Simon, which was great as usual, I mean this whole shitbag Con charade. The arrogant bastards. So Harper’s big Throne Speech will wax poetic about flight 'over booking' and cable bills. Gosh. Because citizens are fed up with that! Because they NEVER worry about how are they going to save for their kid’s education. Or pay off their mortgage, at the same time. Or how to manage to save for retirement. Or how to care for their elderly parents. Or have reliable health care at all for that matter. Or wondering if their next pay cheque is coming; if their job will not be eliminated. Nope.

So Harper now, with scandals and corruption zeroing in at him from every direction, reduces his govt to pilfering age old NDP ideas like cable and cell phone regulation while at the same time stealing Justin's middle class theme, trying to peddle some bullshit noise how he and his Cons 'support the middle class.' Support, of course, which has been clearly demonstrated by how the middle class has only shrunk in size under Con watch, as more and more people fall out of it into the working poor or into outright poverty, and while programs once there to assist those folks are cut, dismantled and eliminated. As the old, infirm, marginalized, disabled, poor etc get increasingly pissed on by the steady stream of the yellow rain of bogus TRICKLE DOWN economics. Who do these Con frauds think they are fooling? Nobody buys this shit, unless they are incredibly stupid. Which of course is the Harper Con base. Canadian Tea Partiers in toques.

Harper's govt never ceases to amaze me with their arrogant disdain for Canadians. It's stunning in it's scope. With a majority government, after having to have hit the 'reset button' to put forward a new agenda for governing Canada after proroguing, the Cons come up with ‘cable bills, cell phones and airline overbooking’ as priorities? THIS is their fucking agenda for a 21st Century Canada? WTF is this shit???? Why don’t they just buy everybody in Canada a fucking pony?

So, what we get is the changing of the channel from the Senate scandal, Del Mastro scandal, Robo Fraud scandals and from the mountains of corruption etc... to... this. Hoping Canadians will be stupid enough to fall for it. More of the same and unethical, dishonest conservative BULLSHIT we've come to expect from this government. Cable companies were ripping people off long before the senate scandal. The Cons could have ended airline overbooking long ago. Cable companies, even if this passes, will just charge more for individual channels anyway. This won't fix FUCK ALL. But then again it's not really supposed to, is it? This is ALL a Con desperation plot dreamed up by the teeny boppers in Harper's PMO to defect from their endless corruption scandals, which NOW even includes the supposedly non partisan Governor General's office, which has just been turned into a Con lobbyist institution to shill for mining, gas and oil corporations in China. Just like how the Cons ruined another Canadian democratic institution, the Senate, having Duffy and Wallin shill for them with our tax money while on the Con election campaign BBQ circuit. NONE of this is really about how much anybody's TV bill is, or how much anybody's cell phone bill is. The Cons don't give a shit about any of that. If they did, they'd have voted in favour of the NDP bills to regulate those, way back when, and made them WORK. But if they did that, then, then they couldn't STEAL the ideas, now. It's really the fucking Theatre of the Absurd, man, and it's getting more absurd by the minute.

hi Wazz...you're absolutely right. It really is the Theatre of the Absurd. With all the serious problems this country faces, they're stealing ideas from others, and trying to change the channel again. If they keep this up much longer I'm going to have to remove the $100 in my bank account, and put it under my mattress. ;)
Because surely it must be clear to most Canadians by now, that the Cons are making it up as they go along, and they're capable of ANYTHING.
But at least now they can't hide any longer, and the time has come to turn up the heat....