The Day Stephen Harper Got Clobbered in Question Period 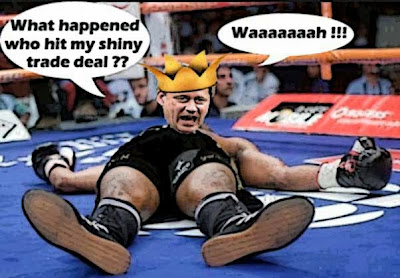 OMG. Throw in the towel. Somebody call a waahmbulance !!!! You won't believe what happened to Stephen Harper in Question Period !!!!

He waddled into the ring with his head held high hoping to brag about his E.U. trade deal, only to get hit with an upper cut to the chin by the NDP's Megan Leslie !!!

And a kick in the nuts courtesy of Mike Duffy.

Senator Mike Duffy's living expenses were "cleared from Day 1" by then Senate government leader Marjory LeBreton's office, and when they later became controversial, Duffy was pressured to take a deal from the Prime Minister's Office, his lawyer told a news conference Monday.

And, when the growing scandal became politically explosive, Duffy was "in effect" told by the PMO not to cooperate with auditors, Bayne said.

He couldn't answer this question.

The NDP's Megan Leslie kicked off by asking whether Harper could "confirm that his office threatened to kick Mike Duffy out of the Senate if he didn't go along with their scheme."

He desperately tried to fight back by accusing the NDP of not supporting his secret trade deal. Even though nobody knows what's in it, it won't be finished for two years. 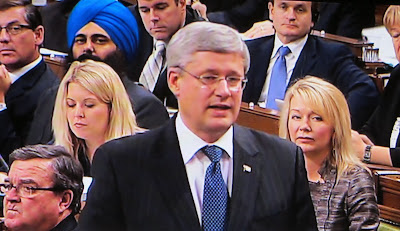 And the NDP is NOT against it.

But as you can see from the looks on the faces of his shattered caucus NOBODY was buying that Big Lie. I mean look at Candice Bergen on the right. She just can't BELIEVE she got a shiny new seat behind Harper.

And now he's making them ALL look like crooks and Con artists. She might as well be on America's Most Wanted eh? And as for poor Michelle Rempel she looks as if she's about to vomit on Jimbo Flaherty's head !!!!

But mercifully it didn't last long. After one two three blows to his integrity after the other, he went down like a sack of P.E.I potatoes.... 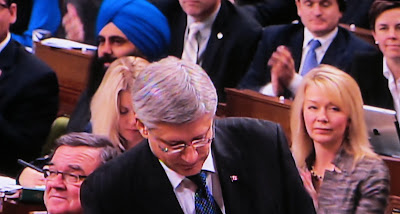 Throwing in the towel, or cutting and running like a coward. As even Kellie Leitch's frozen smile faded. Can you believe THAT?

Leaving it up to his new Parliamentary Secretary Paul Calandra, the ghastly idiot who replaced the disgraced Dean Del Mastro, to try to hold off the opposition... 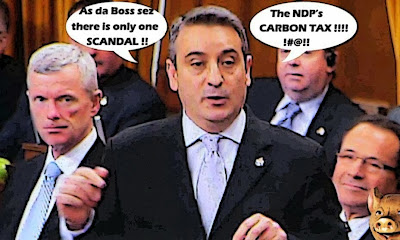 And make a complete fool of himself...

While Great Ugly Leader was wheeled out of the Commons feet first having learned a brutal lesson. 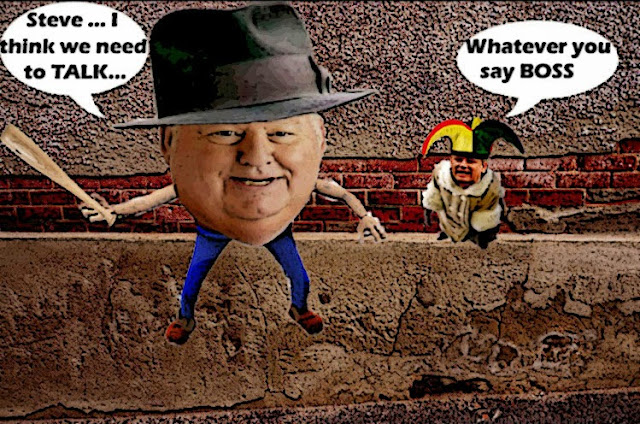 You can muzzle scientists all over the country.

Hundreds of federal scientists said in a survey that they had been asked to exclude or alter technical information in government documents for non-scientific reasons, and thousands said they had been prevented from responding to the media or the public.

But you can't silence Mikey eh?

And who knows where the story goes from here.

Because Duffy's lawyer has this e-mail.

As partial evidence of a deal between Duffy and the PMO, Bayne read a a February 20, 2013, email from Duffy to his lawyer that had been forwarded to Chris Woodcock, a staffer in the PMO. The title of the email was, "Nigel called last night." The email related that Nigel "was expansive." and that he told Duffy he had been working on a scenario and lines for Duffy, and cash for a repayment.

As well as sooooooo many others...

And all it would take is ONE e-mail to show that Harper DID know, and he's done like dinner.

So I think we can see where this one is going... 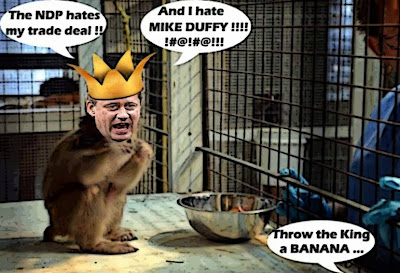 And all I can say is it's about time.

The Con regime is drowning in its own lies.

Are you ready for a little payback? Do you love the sound of Cons squealing?

Golly. I sure do eh?

Measure Harper for a pair of handcuffs. Or a lousy job at a gas station. 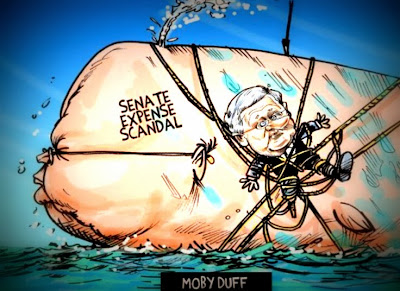 Is any of this a surprise at all??? It was easily predictable that this cabal of Refom - a - Con crooks would eventually wind up shooting themselves in their feet. Although I am not a Duffster fan by any stretch of the imagination, this is a great development. Kudos the the Duff for not allowing himself to be thrown under Harper's bus, and I hope his lawyer comes out with numerous 'updates.' This is all about Harper lying to Canadians, acting unethically and equally unethically trying to hide it, thereafter. It's not about the 'lousy Senate' or the 'difficult eligibility rules' or any of the shit the Cons are trying desperately to frame it as. It is about HARPER. Who apparently orchestrates his office to offer cash in trade for silence. This is as slimy as the day is long. As much as he should hauled into a court to testify, he should at the very least resign. But Harper will never resign. He is a crackpot who believes the great floating ghost in the sky s on his side and everyone who disagrees with him is an enemy of the state. His cabal of mealy mouthed puppets led by that Con dickhead Pierre Poillivre might lie for him and defend him at every measure, now, but in the end, if it all gets "exposed," including that fucken tool Poillivre, they'll all open their gobs and sing like birds. Even Thatcher's own party, not the opposition, did her in. Harper is desperate to clear this up by the Con convention at the end of the month, to re-prove his Steveliness. But he's tainted big time now, so look for his nitwit base to sharpen and draw the knives. Oh, how I want to hear the Duffster sing like a bird in a tree. I want to hear him to sing the whole sad story, and the sooner the better.

Somehow I've got the vision of a cartoon of the Crapservative Party bus trying to hit Duffy and they start going off a cliff to their doom. At this point PM Snake Oil thinks he's still in the driver's seat, and still hasn't realized that the brake lines were cut. He wanted to go out in a blaze of glory, well he's getting his wish in the form of a fiery crash.

I am afraid that Harper nation is as brain dead as Ford nation, and now of this matters, pity.

hi wazz...this Con horror show doesn't surprise me in the sense that I always knew it would end badly. But I never could have imagined it would end in such a sleazy manner, or would be such a freak show.
And of course I'm delighted !!! ;)
Because of course it is the way they deserve to go, swimming in scandal, and drowning in their own lies.
I want to live a normal life, in a normal country. I want this freak show to end, and the sooner the better...

hi bahamut-x.... I like that cartoon a lot. If you could also include Jason Kenney as Wile E. Coyote ending up at the bottom of the canyon AND under the bus, it would be just perfect... ;)

hi Kirby...yes that has to be the ultimate insult, and Calandra is something else. I really can't believe the guy. But it does make you wonder how Harper could make Dean Del Mastro and then Paul Calandra his Parliamentary Secretary. Clearly bully loudmouth must be the main qualification...

hi Steve... I hope you're wrong, and that even some Cons are revolted by this appalling spectacle. Just like I hope that some of the so-called For Nation are equally appalled what the Fordzilla is doing to Toronto. They're not the brightest people, or they never would have voted for them in the first place, but surely they must know a crooked fraud when they see one...

I'm sorry Simon. I know a lot of those people and even when they know they don't care.

And just when I thought I'd never like Duffy! He gives that speech in the Senate. May not love him, but that speech, made my day. Couldn't stop laughing. He did Harper in, well actually Harper did himself in, Duffy just like a good newsperson, told the story.

when harper got up to answer questions, he was "framed" from behind by two blondes. I don't know if that was done on purpose, but hey, you work with what you have. No one seemed amuzed. Who says radio is dead. The t.v. played Duffy's speech, no visual of the proceedings, just stills of Duffy. This looks so good on Harper.

both those dumb blonde bimbos behind him should not even be in the house of commons...that dumb one to the left of him just bobbles her head up and down smiling every time he opens his mouth.... she might be another monica lewinski