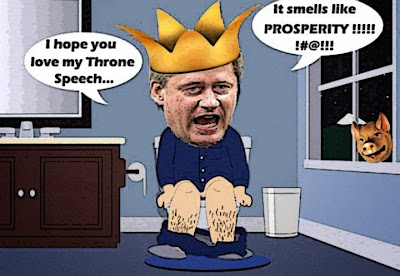 Well as you know Stephen Harper deposited his Throne Speech yesterday with much fanfare and farting, and then ran off to Belgium. So he wouldn't have to answer any questions.

Which was just as well eh?

Because the reviews came in today, and they were really STINKY.

Bruce Anderson called it a Throne Drone. Chantale Hebert called it half baked. Greg Weston called it a compendium of platitudes and warmed up promises that didn't even live up to its pre-release spin.

For instance, in a weekend interview with CBC News and other media outlets, Industry Minister James Moore promised the throne speech would be “consumer friendly,” including measures to crack down on airlines that overbook flights and just bump passengers with valid tickets.

The proposal understandably garnered big headlines on the weekend and no doubt hit a happy note with air travellers, but the actual throne speech mentioned not a word of it.

But I think they all could have saved themselves a lot of words, and just called it The Great Throne Speech Scam...or CHAFF.

The kind of stuff planes fire off to deflect missiles... 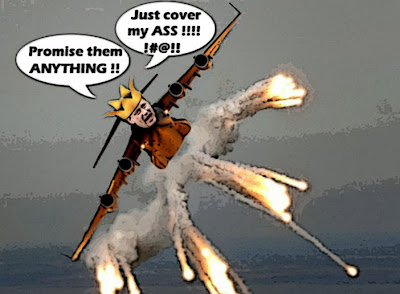 Or Great Ugly Leader fires off to deflect attention from this sordid scandal.

New Democrats want a parliamentary committee to determine whether Prime Minister Stephen Harper deliberately misled the House of Commons over the Senate expenses scandal or was deceived by his own staff.

NDP ethics critic Charlie Angus has asked Commons Speaker Andrew Scheer to make a preliminary finding that Harper was in contempt of Parliament last spring when he repeatedly insisted no one in his office knew his chief of staff had bailed out Sen. Mike Duffy – an assurance since contradicted by the RCMP.

Or for that matter, the kind of meaningless bullshit the Con Senate fired off today to make itself look accountable.

The Senate is moving to suspend senators Mike Duffy and Pamela Wallin from the red chamber without pay, CBC has learned. At the same time, Duffy has sent a letter to the Speaker of the Senate, Noel Kinsella, requesting a medical leave of absence because of a heart condition.

Because who cares what the Senate says or what Duffy does? When the burning question is what did Stephen Harper KNOW?

But unfortunately at the end of the day, the second Senate story got more play than the first one.

Which makes me wish that the opposition had asked Pierre Poilievre, who was filling in for Harper today, this question: 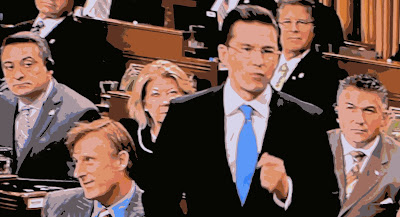 Since James Moore made such a big deal out of an Airline Passengers Bill of Rights, and got so much publicity, do you still think it's a REALLY bad idea?

And is THAT why it didn't make it into the Throne Speech?

Because I'm sure there are a lot of Canadians out there who still think the Cons are planning to protect them from the big bad airlines, and any time you can expose the Harperites as Con artists.

Or make it look like you can't trust ANYTHING they say.

Can only help make this story the hit of the season... 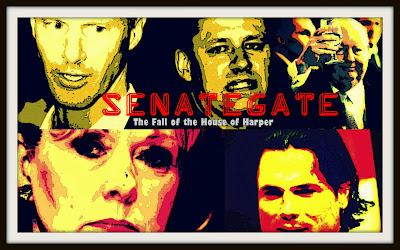 Oh well. There will be other opportunities to put Poilievre on the spot.

And Stephen Harper can run but he can't hide.

Even Breaking Bad got off to a slow start eh?

And this Con crime story can only get BETTER.... 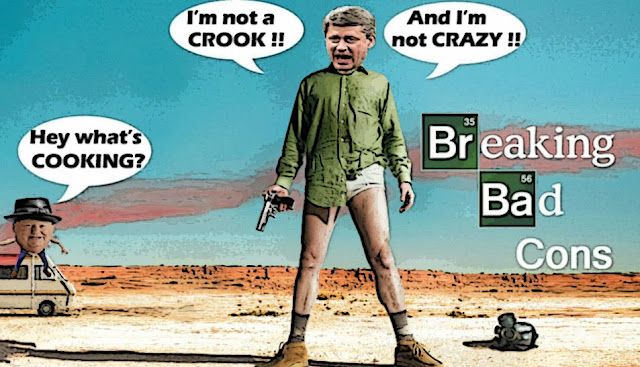 I don't see you getting many "attaboys" in the comments. Don/t burn out. Reality tastes like shit. Hang in there as long as possible and keep punching. I for one appreciate your dogged zeal to pull through to a nicer, cleaner Canada. Thank you.

Of course Duffy is on med leave; he's a walking cheeseburger. As for Wallin, if she is 'suspended for gross negligence in managing parliamentary resources,' why isn't Stevie suspended for reviewing her expenses and saying nothing was wrong with them?

Harper should have been tossed into the brig, long, long ago. Harper is handing Canada over to, Communist China. That is being a traitor to Canada, doing acts of treason.

Harper was Policy Chief for his, Northern Foundation of 1989. Harper hired Wolfgang Droege and his Heritage Front as, security for Preston Manning. Harper is the monster we have, running our country right into the ground.

The throne speech was less than boring. It was nonsense. If this is the best they have to offer, time to exit. They have run out of steam. We already have laws to deal with the worst of the offenders. Why does Mckay need more rules, to keep them in jail, if they can't get out with the old ones? No one really cares about "bundling" their cell phones and t.v. Its a few buck here and there. People are interested in such things as, will medical care as we know it continue and get better. Will our kids get into university and then be able to get a decent job? Will the disparity between the rich and the poor close or get worse. When the cons were talking about the "middle class", who were they talking about? Those who make $250K a yr or more? At one time the middle class in Canada was also the working class. Those days are gone. People have barely enough money to get by. The joblessness in Canada keeps increasing. Canada is being investigated by the U.N. because of the horrible conditions First Nations People live in.

People are concerned about water quality and fracking; pipelines and oil spills, the safety of the food in this country. The rest is just small shit that people complain about from time to time. I'm not happy about the way cable is sold, but hey, it really doesn't affect my quality of life. I am free to read or use NetFlex. The cell phone, well that is just another enviornmental mess. People have been talked into feeling they need them every minute of every day. We don't need them. There is this really neat thing, its called a land line. Its cheap and cheerful. Works everytime. We do not need to be "in touch" constantly. People don't need to be afraid to be by themsleves. Their kids don't need to be playing with games on ipads constantly. They could try talking to their children and save a lot of money.

Simon doesn't need "attaboys". He will receive his reward in Heaven for his kingdom is not of this world. Amen.

I like that. Who said it ?Jim Morrison ;) My challenge is through natural means, to try to keep my feet on the ground, and my head in the clouds...

hi anonymous 7:24...I'm afraid the main reason I don't get many "attaboys" in the comments is that I don't deserve them. But it's just as well eh? Because when people do praise me I turn as red as a tomato. Some counselor when I was in school told me it was because I'm an introvert, which I misheard as pervert and shocked me to my core. ;)
But seriously though, I do get enough support from people to give me the confidence to continue. And I've always had to motivate myself, since most of my friends aren't as interested in politics as I am.
And really what I'm trying to do is leave a diary of these times, so that sometime in the future I can point to it and say:
See, I never accepted the Con regime, I fought those hideous bullies as hard as I could, I never gave them an inch or allowed them to get me down. And I thumbed my nose at them, or mooned them, or mocked their vile pretensions, or laughed in their dirty faces until the day they were gone.
I'd be more ambitious, but I'm lazy eh? So it's good enough for me...

hi anonymous 8:27...Thank you...I think. I mean do I really have to wait that long to get my reward? ;)
I'm hoping it will only be two years at the most, when those ghastly Cons have been defeated and we can start rebuilding Canada. For that will be reward enough...

hi wazz...well actually I was worried about Duffy. He has had heart problems, he is overweight, and the stress must be enormous. For although he is an old scoundrel, I wouldn't want anything horrible to happen to him. But yes, good question about Stevie the auditor. I wish the opposition would remind Canadians more often about Harper's obvious problem with numbers. Because if they won't we must... ;)

hi anonymous 4:29...as I've said before I don't care what Harper did twenty years ago. Or what right-wing posse he hung out with. I've seen enough evidence in the last eight years to condemn him, and all I care about now is encouraging progressives to do all they can to defeat him...

hi e.a.f....Yes, it was a tacky little Throne Speech. Never was there such smallness in a speech so long. Or such foulness. When I heard the Governor General forced to mouth words like "coddling criminals' it was just so disgusting. And the fact that in a speech so long the word climate change was never mentioned once, is almost unbelievable. For he must think that he can get away with ANYTHING.
As for cellphones...I feel the same way you do, but I fear that battle has been lost. I can't believe how many Canadians walk around these days with their faces glued to tiny screens. But then I've degenerated to the point that I feel naked without my cellphone, so who am I to talk? There must be a better way AND a better government...;)

It appears that Dear Leader prorogued parliament because he hadn't done his homework over the summer. Have a look at this letter from the CCCE: http://www.ceocouncil.ca/publication/letter-to-the-right-honourable-stephen-j-harper-regarding-the-upcoming-speech-from-the-throne

and then listen to the throne speech again. It looks to me like his old buddy John Manley came to the rescue; not the first time Stevo has been guilty of plagiarism.

hi anonymous.... yes it does look like Manley had a big hand in writing the Throne Speech. Although some of the prose in it is so bad, it could only have been written by Harper. i actually had to read the whole thing to look something up, and by the time I finished I needed to lie down and rest my aching head. As we say in Quebec, more boring than that or more Con, and you die...

hi Sassy....won't it ever. I'm going to have to check with my doctor to see if my heart can stand the strain...and the six days of heavy drinking that shall follow Harper's departure. I'm going to see if I can bribe the priest in the neighbourhood church to let me ring the bells... ;)