Stephen Harper and the Revenge of Pamela Wallin 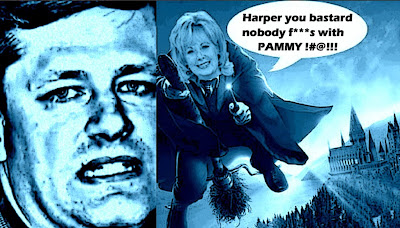 Golly. If I wasn't enjoying Stephen Harper's pain so much I'd probably feel sorry for him eh?

Because that sordid Senate scandal just keeps coming at him from all directions like a bat out of Hell.

Yesterday it was Mike Duffy, bellowing like a wounded moose, and goring his reputation further.

Today Pamela Wallin flew into the Red Chamber and she was REALLY pissed.

Pamela Wallin finally got her say on the floor of the Senate Wednesday, and used the podium to take some shots at fellow senators. Addressing the motion that would also cut her office use and benefits, Wallin pointed out that losing health benefits would be "a troubling prospect for a cancer survivor."

Accusing some Cons of all but trying to KILL her. And Stephen Harper of orchestrating a smear campaign.

Wallin continued, saying she suspects Government Senate Leader Claude Carignan is taking orders from the Prime Minister's Office in the interests of appeasing public opinion that would like to abolish the Senate.

And who can blame her for feeling bitter eh? After all she's been through... 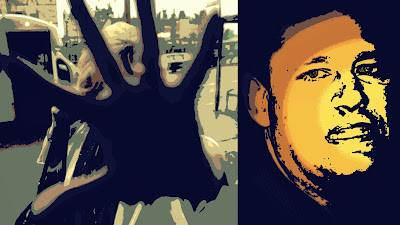 Especially when she feels that Harper's old tool Marjory LeBreton, and Harper's longtime confidant Carolyn Stewart Olsen are out to get her.

She said Stewart Olsen and Senator Marjory LeBreton could not bear the fact she is outspoken, or was critical of their leadership, adding, "They resented that — me being an activist senator." Stewart Olsen, Wallin said, "had her sights trained on me from the beginning."

And Harper's Wonder Boy Ray Novak was the one who told her to resign or ELSE.... 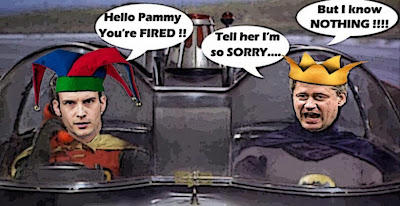 Who to add to her humiliation of being sacked like a servant, may be half her age, but is his master's voice.

And to inflame her further, it must be as obvious to her as it is to everybody else, that the reason the Harper gang is giving her the bum's rush, is to please their rabid base before the Con Convention.

Because they're not just rabid eh? 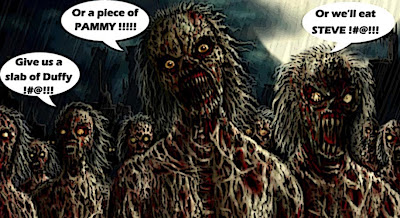 And Stephen Harper doesn't need anyone to remind those zombies that he PERSONALLY approved Pammy's expenses and pronounced them SATISFACTORY.

Which might lead people to think that either he can't count, and he's a very poor Great Economist Leader. Or he didn't think they were a problem, which would of course be SCANDALOUS.

And should the police lay charges would be VERY embarrassing.

Especially since it doesn't look like Pammy is going quietly... 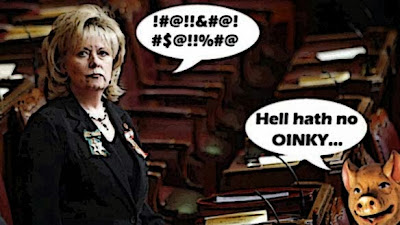 Wallin ended her speech dramatically, saying "They hoped all this would force me to resign. But despite the clear, vindictive intent of this motion, you will never break my spirit."

And if she decides to seek revenge she could do a lot of damage. By doing what Duffy is probably going to do and writing a book.

Which if published shortly before the next election could really make Stephen Harper and the PMO gang SQUIRM... 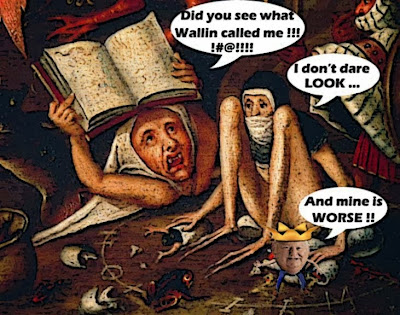 And would probably finish him off, if the police haven't arrested him first.

Yup. I for one can't get enough of this scary Senate scandal eh?

And watching the Cons fight each other is like watching mud wresting. In a SEWER.

They're all truly desperate.

And they're all going DOWN...

Simon, although I would love to see stevie do a long stretch in the grey-bar hotel, it isn't going to happen just because he and his cronies control the police and the r.c.m.p. so what are the odds that you're going to get arrested or even charged by your amigos in crime, hmmmmm?
The only real hope here is that the now enraged duffer and cow-pammy decide to take their best broadside shots at the hms queen harpo and company and as a result of their spiteful willingness to take as many down with them as they can, they sink the whole goddamned bunch of them. Amen. I has spoken!

Pammy's 'He done me wrong' rant was good PR. Never have been, never will be a fan of PW, and felt her effort to publicly humiliate Stevie, while entertaining, was more self-serving side than anything else. Bottom line = she screwed Canadian taxpayers. Forget the 'I didn't know the rules' BS. If Pammy, Duff and the Braz contribute to Harper's downfall, so be it, but they must still be held to account.

Pammy whining about losing her gold-plated medical coverage, because she's a cancer survivor? Give me a break.

Her comment about being an 'activist' senator.......what world does she live in? An activist she is not - except on her own behalf , now that she's been caught at the trough.

Yup, things are getting nasty and it's a joy to see Harper squirm. This debacle cannot be swept under the carpet!

My guess is that Stevie 'Can't stand the heat, time to get out of the kitchen' Harper is making arrangements to hop on a jet plane, to some far off locale, in hopes that this scandal goes away. Aren't there still some despot run countries he has yet to sign trade agreements with?

Is Robin currently living in the Bat Cave or the Bat Attic?