Stephen Harper and the Bonfire of the Insanities Uh oh. What bad timing. Just the other day he was blowing his horn and telling his Con caucus that we must "seize the moment" and go "further and faster."

Telling us all that we must move even MORE oily goodness by rail. Because Canada Alberta needs the money eh?

But now he's playing a tiny violin, reaching for a fire extinguisher, and watching Alberta burn. 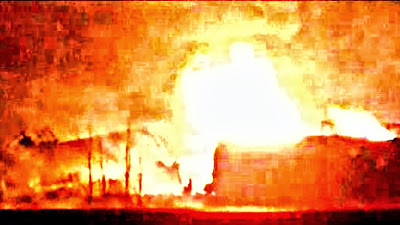 A CN Rail train carrying liquefied petroleum gas and crude oil has derailed and exploded about 80 kilometres west of Edmonton, prompting an evacuation in the tiny community of Gainford.

Fire officials say they have little choice but to let the fuel burn itself off, resulting in a dark, billowing cloud of smoke that remained hanging over Gainford throughout the day.

And no doubt preparing to try to explain why he's urging Big Rail to go faster, and move even more of his precious oil, when they're clearly not ready.

And communities across Canada are being threatened by thousands of aging time bombs.

Ben West, a campaigner with environmental group Forest Ethics, said the latest derailment raises questions about the continued use of older oil train cars he called more vulnerable to spilling upon derailment. “In the short term, with the existing traffic, we really should be looking at what kind of train cars are being used. Some of these old cars seem really problematic.”

Is that what Great Law and Order Leader means when he says he's making Canada SAFER?

Gawd. Who needs terrorists when we got the Harper gang?

When will the deranged oil pimp curb his insane frenzy? 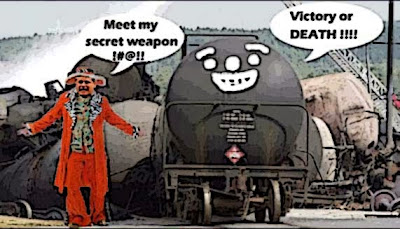 Will his foul Con regime EVER stop trying to hide things from Canadians?

The Federation of Canadian Municipalities also formed a rail-safety working group shortly after the Lac Megantic derailment and asked Transport Canada for more information about the transportation of hazardous goods. But federal officials have cautioned that such information could pose a safety risk if it fell into the wrong hands.

And when will Stephen Harper stop LYING?

Like he did again at that Con caucus meeting, where after telling his wildly cheering stooges that we must go further and faster, he went slower and lower eh?

While simultaneously smearing the Liberals as drug dealers...

And then turning the whole event into an attack on the media.

Most of the media gallery refused to show up for Harper's speech to caucus members on Wednesday when his office insisted on allowing only photographers and TV cameras to attend — no reporters.

Before the day was out, the Conservatives were using the dispute to raise money — a fundraising letter accused the "Ottawa media elite" of sinking to a "new low" — in hopes of turning Canada's love-hate relationship with its journalists to the party's political benefit.

And we're supposed to trust people like that with OUR safety?

In fact, I always thought this picture was an omen... 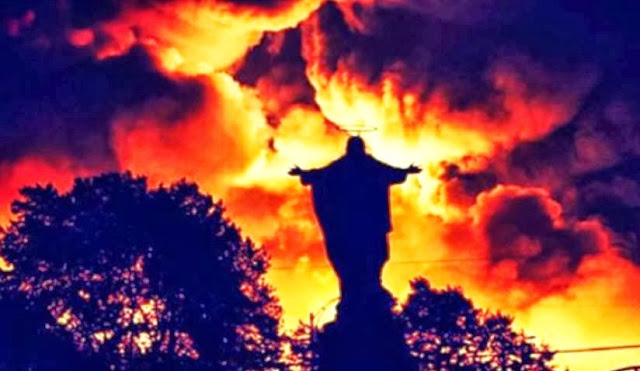 Or a message from the dead.

Defeat those oily Cons and their deranged leader.

Before they incinerate the truth. 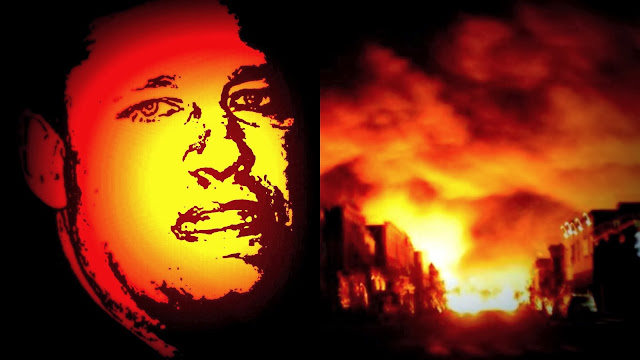 When will the deranged oil pimp curb his insane frenzy?
Will his foul Con regime EVER stop trying to hide things from Canadians?
And when will Stephen Harper stop LYING?
NOT EVEN AFTER HE IS DEAD!!! The cons will keep resurrecting his ghost back to their caucuses for decades just like the rethuglicans do the ghost of ronnie rayguns (you know, the drunken, alzheimers excuse the 'murkans say is the greatest preznit in the history of that nation) and completely distort anything even remotely unflattering to her majesty, queen harper, until he sounds like a demigod.
The only way to get rid of him/them (the CONS he hangs out with) is to vote in a super majority of NDP. I live in Ontario and we just can't trust the liberal giveaway scam artists like mcguilty and wynne to do anything other than waste more of our money by giving it to their corporate buddies. Look at your hydro bill after Nov. 1 to see what the fuck I'm talking about and the $1.1 billion dollars WE are going to foot the bill for, Simon, before you say anything about Trudeau (capitalization = respect). Youth and a pretty smile and being able to burn one without doing doing 10 years in solitary confinement aren't going to get us out of this fucked-up mess the libs got us into. I'm not a Mulcair fan and I think he also has a hidden agenda but I'm hoping he's not as toxic as the cons and con-lites and he does have cajones. Might not be enough to save us but it's a good start.
Cheers

The Harper Robo Frauds literally are a rolling exploding train wreck of a government. Yes, it's a conspiracy by the "media elite". You know you're in it deep up to your eyeballs when you have to take your PR cues from Rob Ford. The only new low here is found with the unelected RoboCon carpetbaggers trying to further muzzle the press. Harper is too gutless to face the media through regular press conferences and even to face Parliament. Even during some of the darkest days of Watergate, Nixon was willing to face the press. Harper isn't, because he has a lot more to hide.

hi anonymous...you know the thought of Sephen Harper coming back like a zombie to haunt us is almost more than I can bear. He's scary enough right now. ;) As for who will save us from this mess, I live in a solid NDP riding so I'll probably be voting for them again, even though they are not as left as I would like them to be. But if Justin Trudeau turns out to be the designated Messiah more power to him. Because quite frankly at this point I just want the Cons to be defeated, and the damage to stop...

hi wazz...yes it is a train wreck of a government, and the idea that the corporate media is against them is so ridiculous it verges on the paranoid. And as I mentioned in the post, what struck me was the length Stephen Harper goes to, to conceal his persona. I mean I knew the guy was a control freak but that's ridiculous, and only convinces me, despite what the corporate media says, that he does have a hidden agenda. And that he is determined to pull the wool over the eyes of Canadians. I really can't believe that such a weird and sinister guy is our Prime Minister. Or should I say the Prime Minister, because he certainly isn't mine...