Robo Harper and the Revenge of Mike Duffy 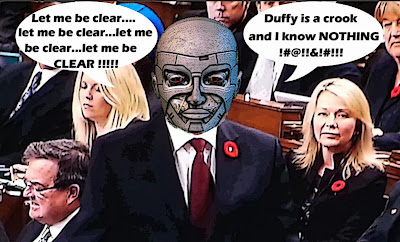 It couldn't have been a more pathetic sight. An angry Stephen Harper lashing out at everybody but himself.

Growing visibly more angry with every allegation coming from a senator that he appointed, Prime Minister Stephen Harper said during question period on Tuesday that Mike Duffy has shown no remorse for claiming ineligible expenses and should be removed from the Senate.

Answering almost every question exactly the same way, to try to make sure his scripted message made the news.

"On our side, there is one person responsible for this deception. That person is Mr. Wright." "It is Mr. Wright by his own admission. For that reason, Mr. Speaker, Mr. Wright no longer works for us. Mr. Duffy shouldn't either," Harper said.

While trying to dodge this one:

If Duffy's expenses were "inappropriate" as Harper said again Tuesday, why did the Conservative Party pay for the senator's legal fees?, Mulcair asked. Harper did not directly answer the question saying only that he has said "it was inappropriate all along."

And shafting his loyal servant Nigel Wright in the most disgusting and cowardly manner, to try to save himself.

Harper launched a blistering attack Tuesday on his former chief of staff, likening him to disgraced Sen. Mike Duffy whom he characterized as a liar who should be tossed off the “public payroll.”

Only to end up looking like a man at the end of his rope, trying to decide whether to call a taxi or an AMBULANCE... 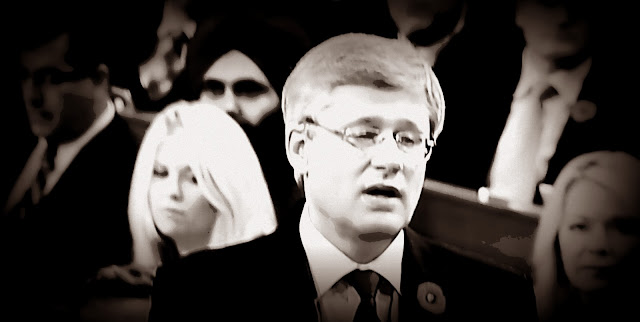 But then who can blame him eh?

When the scandal is KILLING him in the polls.

A new poll suggests dramatic allegations from Senator Mike Duffy about PMO pressure and manipulation over a $90,000 repayment of his Senate expenses has cost Prime Minister Harper federal voter support in Ontario, the province where narrow victories helped to gave the Conservatives a majority government in 2011 and where the Conservatives are also pinning hopes for a second majority in the next federal general election.

And to add insult to injury, when Canadians are asked to choose who they believe, him or Mike Duffy, they believe Ol' Duff.

When it comes to the Senate expense scandal, more Canadians believe beleaguered Senator Mike Duffy’s story over Prime Minister Stephen Harper’s version of events, according to a new poll.

Some 40 per cent of respondents said they believed Duffy’s tale – including the circumstances surrounding the infamous $90,000 cheque supplied by former chief of staff Nigel Wright - while only 18 per cent think Harper’s telling the truth.

Which means that even if Harper serves up Duffy's head on a platter to pleasure his rabid base at the Con convention, it won't help him become more popular with other Canadians.

Not when he's fallen so low, even Ol' Duff is more plausible than he is.... 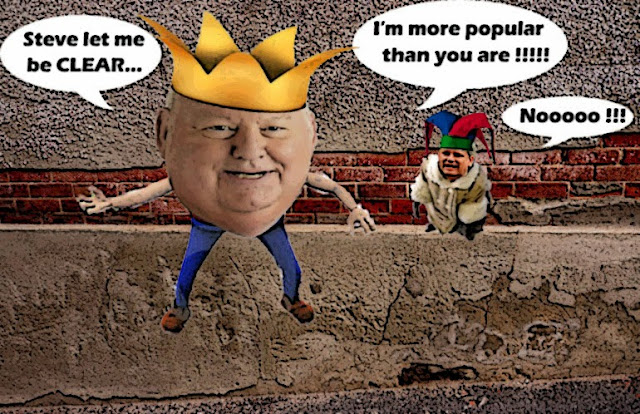 “Mr. Duffy, who was in a lot of trouble with the public not long ago, is now seen as considerably more plausible in terms of his position than the Prime Minister of Canada,” said Frank Graves, president of Ekos Research Associates Inc.

Gawd. Talk about Duffy's revenge. That one must REALLY hurt.

And of course this could be FATAL.

If it turns out Harper lied or misled Parliament or the public about his role in the scandal more than two-thirds of Canadians think the prime minister should immediately resign, the poll says.

For as I've always said the damage is cumulative. So many Canadians are so sick and tired of Harper, for them Senate scandal is just an excuse to get rid of him. Or hate him even MORE.

And it will haunt him as long as he remains in power. If the police don't arrest him first.

Yup. The cowardly Con robot can repeat his lines. Or shank his buddies.

But his battery is running low. 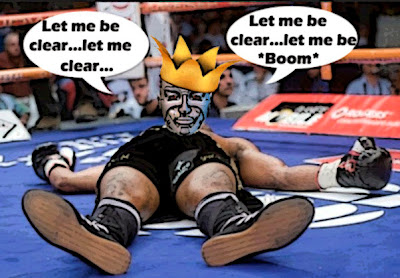 P.S. Don't just take my word for that eh?

Because I checked with some of MY robots tonight.

And they agree with me... 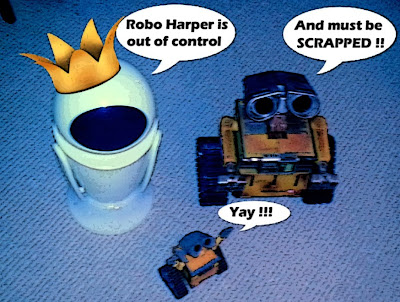 Yes, I think we can all agree on that.

Robo Harper is desperate and dangerous.

And must be dismissed dismantled as soon as possible...

The picture at the top, it looks like Jim Flaraghety has a very bad tooth ache. He seemed to have had it the other day and it seems to have remained with him. Alas, poor Jim may see the end is ney, even though stevie slime doesn't. Perhaps he actually believes he can continue to stone wall Mulcair. People are actually starting to notice stevie is repeating the same thing over adn over and not answering the question.

Even if stevie manages to have the 3 senators turfed from the Senate, expect Mike Duffy to write a tell all with a release date close enough to the next federal election, that it will sink stevie and all his cons. We have Stevie Cameron's On the Take, the Mulroney Years, now we will have Mike Duffy's, I took them down, when they tried to throw me under the bus.

When it first became obvious that the party had attempted to interfere with public disclosure of his questionable housing allowance claims, I suspected that an attempt was being made to prevent further scrutiny of the Senator’s travel, temporary accommodation and hospitality expenses. I had believed for some time that the party had concluded an informal arrangement with Duffy whereby he had been given to understand that some flexibility on is Senate expenditures would be considered to compensate him for his “expanded role in the party”. I recalled that sometime in 2009 he had been called to account by the opposition for having submitted claims for what seemed to be excessive expenses incurred during various “outreach” tours.

“During his first three months in the red chamber, Conservative Senator Mike Duffy racked up more than $100,848 in travel and office expenses, more than double the average of what the other three Island senators spend in a typical quarter.”

hi e.a.f...after watching Flaherty during Question Period in the last two weeks I don't think he's in very good shape. For he seems in a world of his own most of the time, and on the few occasions when he says something he seems to struggle to get out the words. But I'm not ruling out that he is disgusted by what he sees. As for Duffy, I have to admit I'm a bit concerned about his health too, because the stress must be enormous, especially for someone with a heart condition, and those grotesque Cons would like nothing better than for him to keel over and die. However, if he does survive I think he could write a book that could be very embarrassing to the Harperites. At least of such things do I dream...

hi John...good work digging up that story about Duffy's expenses, and yes I can't forget that incident with Peter Stoffer which was absolutely disgusting. And I've heard some other stories about Ol' Duff that I can't repeat in the name of decency. But it's quite clear he had special dispensation, until he didn't, and now they're trying to throw him under the bus. My warning to them would be this one: he may or may not have the evidence to sink them on the Senate scandal, but he does have enough stories they really wouldn't want the public to hear...