Stephen Harper and the Smearing of Tom Mulcair 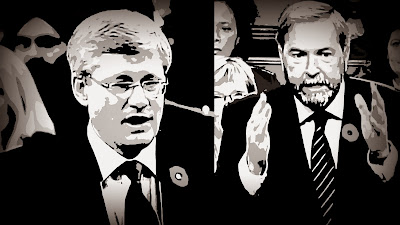 There couldn't have been a better illustration of what Stephen Harper has done to our Parliament and our country.

A more disgusting example of how he corrupts everything he touches. Smears anyone who gets in his way. And is making a mockery out of our democracy.

For there he was today, dodging Tom Mulcair's questions about the Senate scandal and the second Con cheque that was used to pay Duffy's legal bills.

“Mr. Speaker,” Mr. Mulcair asked, “how many checks have been issued by the Prime Minister’s lawyers to buy the silence of Mike Duffy?” Mr. Harper did not appreciate Mr. Mulcair’s insinuation.

“Mr. Speaker,” the Prime Minister complained, “this claim is false. It is the case, as I said yesterday, that all political parties do provide legal assistance to their members. I believe that is done in his party as well.”

Before turning on his questioner, and trying to smear him.

“In the case of the leader of the NDP, it is my understanding and he can confirm not only has his party in the past paid for certain legal expenses, it even paid findings of wrongdoing against him by a court of law that the party paid almost $100,000 in damages on his behalf,” Mr. Harper reported. “Can he confirm that?”

“Ohhh!” the Conservatives cried as they stood to cheer their man.

While never mentioning that the party in question was the Quebec Liberal Party, not the NDP. Or the facts of the case which are these:

In 2002, La Presse printed a story by its senior political correspondent Denis Lessard, claiming that Yves Duhaime, a former PQ cabinet minister, had used his friendship with the then PQ Premier Bernard Landry to secure a big lobbying contract.

Shortly afterwards Mulcair and Duhaime confronted each other on a popular TV show... 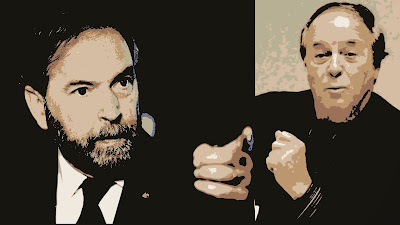 And after the taping was over, when Duhaime claimed that Mulcair had defamed him, Mulcair replied by saying this:

Which was no doubt unfortunate eh? And cost the Quebec Liberal Party a lot of money. But since he was only repeating what had been published in the most reputable paper in the province, its understandable why the party picked up the tab.

And it cannot be even remotely compared to the case of a Prime Minister and a party who are strongly suspected of concealing the truth to cover-up a cash for silence scheme... 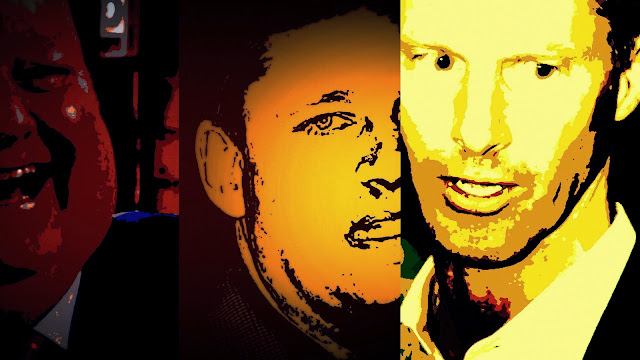 But then Harper doesn't care eh? Because he will lie again and again, and smear his opponents, for the sole purpose of trying to prove that all politicians are as dirty as he is.

So he can turn Canadians off the political process, and win an election with the thirty percent plus of hard core supporters, who will vote for him no matter what he does.

The Senate expenses scandal may be ensnarling Stephen Harper in controversy, but polling suggests it’s so far had little impact on Conservative support among decided voters.

As he has since he came to power, and introduced American style attack ads, to degrade our politics, and smear his opponents. 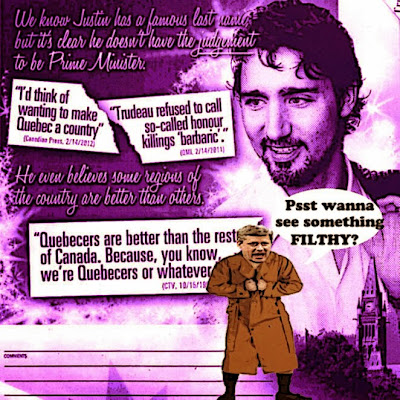 In the most disgusting and perverted way possible.

Turning our Parliament into a Roman circus, or as he is doing these days, deploying his new parliamentary secretary Paul Calandra, to turn it into a CLOWN SHOW.

“One of the first things I taught my daughters when they could speak was their address, so that if they got lost they would know to tell the police or anybody where they live,” Mr. Calandra related. “Only the Liberals and the New Democrats are standing up for people who clearly do not even know where they live.”

And mock our democracy further.

And all I can say is what a ghastly spectacle. How low have we fallen? Into what fascist darkness would Harper and his whooping, hollering Con thugs drag us?

Former prime minister Joe Clark says current PM Stephen Harper needs to "bring people into the facts" and tell the real story about what went on with Senator Mike Duffy and Nigel Wright, the PM's former chief of staff.

For reminding me that once the Cons were better and more Canadian than they are now. For speaking truth to power.

"It raises a very real question that comes back to the prime minister: if Mike Duffy has been such a problem, who appointed him? If Nigel Wright is the person they're blaming, who hired him?"

For encouraging me to believe in something better.

And of course for making me feel better about portraying those hideous alien Cons and their morally depraved leader EXACTLY as I see them... 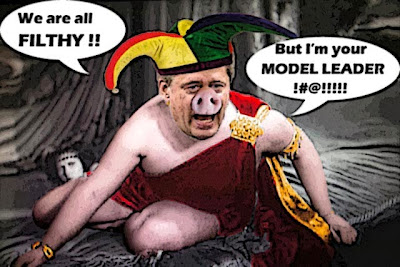 For that's my humble way of speaking truth to power eh?

And surely after all that has happened, this is the truth no decent Canadian can deny:

Until we remove that grunting bully and smear artist from power. Who would dare to presume that we are all as dirty as he is.

And it will not be Canada...

I'm more hopeful that I've ever been about this. The worse he gets, the more obvious it becomes to the public that he's not fit to govern.

Harper is the master of, lies, deceit, corruption, thefts, dirty politics, dirty tactics and, he cheats to win. No-one with self respect, decency, honor, ethics and morals, could ever support a monster such as Harper, what-so-ever. Nor is Harper a Conservative, never has been.

That is only a drop in the ocean for Harper's treachery, towards Canada and the citizens.

Are you seriously defending Tom Mulcair for his involvement in that nasty bit of business in 1997 with Yves Duhaime? Or are you mistakenly thinking that 'enemies of my enemies are my friends'. That's always a sellout.

Granted, Harper is nasty himself and should be held accountable, and answer questions, but seriously? They're both unfit. And I find your translation of the phrase 'vieille plotte', to 'old whore' to be rather generous. According to my wife, it is much more serious than that. Of course she probably wouldn't be caught dead hanging with people who talked like that.

As I am reading it, there was more to this conversation than you have touched on. And whether the Liberal party of quebec paid for it or not, this was the start of his road out. This goes to Mulcair's credibility or lack thereof and his dubious judgement. Heaven forbid that Canada falls for his miraculous makeover and makes him Prime Minister. I don't think Canada could stand to have two consecutive Prime Ministers of such dubious character.