Stephen Harper and the Quebec Card 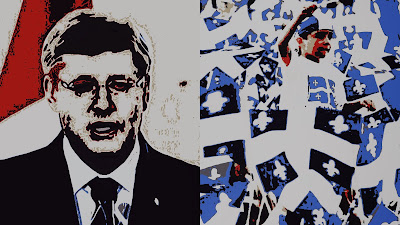 There are many things to worry about what Stephen Harper might do to Canada, especially now that he is desperate.

From forcing through his pipelines at gunpoint, to threatening the future of our medicare system.

But what I fear the most is that he might, for cheap political reasons, harness anti-Quebec sentiment in this country, and leave Canada shattered and broken.

And this is definitely a step in that direction.

The Harper government is intervening in a court case that seeks to invalidate Bill 99, the provincial law passed 13 years ago asserting Quebecers' right to decide the rules of secession from Canada.

The government of former Parti Québécois premier Lucien Bouchard passed Bill 99 back in 2000 in response to the federal government's Clarity Act, which set out the conditions under which Parliament would negotiate with Quebec to secede.

Because there was really no reason for the federal government to intervene, not when it has a Supreme Court reference under its belt, and the case has been languishing for years.

And the timing is highly suspicious, coming just a few weeks before the Parti Quebecois government may call an election.

Which needless to say has Pauline Marois and her PQ gang practically dancing with joy, at this gift from heaven or Harper. 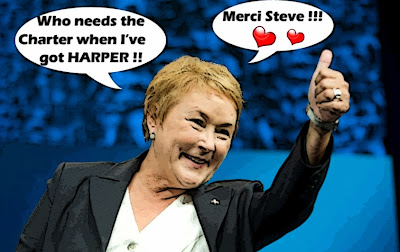 Quebec's intergovernmental affairs minister is calling the federal government's foray into a court challenge of Bill 99 a direct attack on the legal rights of Quebecers.

Alexandre Cloutier said the Parti Québécois will table a motion in the coming days at the national assembly, and that Ottawa has no business challenging what he calls one of the most important laws Quebec has ever adopted.

And leaves me asking this question: If this is true.

Stephen Harper has been kept personally apprised of the progress of the Henderson/Tyler challenge to Law 99. William Johnson, the journalist, Anglo-rights activist and author of the first book-length Harper biography, has been writing to Harper to urge him to act against Law 99.

”I urged Harper to send a reference to the Supreme Court on Quebec’s Bill 99,” Bill Johnson told me in a letter in February of this year. “The (unofficial) feedback I received from someone close to Harper was that, for Harper to act on 99, there would have to be a groundswell of support in the media.

Where was that groundswell of support in the media? And why NOW?

And the only reason I can come up with is that Stephen Harper would very much like the PQ to win a majority, so Marois could begin her separatist crusade for real, and he could pose as Great Canada Leader.

Or failing that, use the issue to smear Tom Mulcair and Justin Trudeau, as well as breathe life into the moribund Bloc Quebecois so it can siphon votes away from both of them in the next election. Or just portray the opposition as TRAITORS.

As he has done before with other federalist leaders... 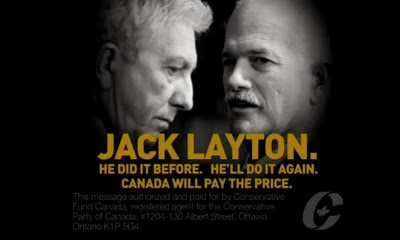 Because of course he has nothing to lose in Quebec, where they hate him so much he'll be lucky to hold on to his five seats.

But the problem is that when you play cheap politics with national unity, when you awaken sleeping dogs, there's always the danger that they could jump up and bite you.

For although Quebecers couldn't be more lukewarm about sovereignty these days, if they could read the comments in the English papers today even many federalists would feel like separating TOMORROW. For they are truly disgusting.

And any Canadian Prime Minister who would harness that ugly sentiment for personal gain, or collaborate with the separatists, is unfit to remain in office.

Yup, as I've said before Stephen Harper is desperate and is capable of ANYTHING.

Don't let him distract us from the real issues, and the sordid scandals of his corrupt government.

Don't let him divide us for nothing.

Don't let him destroy our country... 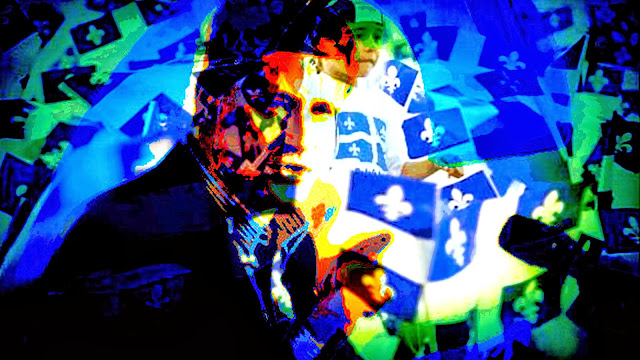 Not pertinent directly to your excellent post and not that we need anything else to live in terror of, but here's something that your readers might want to check out and hence understand why harper is so obsessed with the keystone pipeline thing. Imagine what his commission will be on this number . . .
http://ecowatch.com/2013/10/20/koch-brothers-100-billion-profit-keystone-xl-pipeline-built/

It is a distraction from other issues, but the Harper government doesn't want to debate its own record, transport safety, Lac Megantic, fracking and native protests, the Senate scandal so it resurrects an echo from the constitutional debates of the last referendum which has been languishing in the courts for the past 13 years, a legal challenge to Quebec's law 99, itself a response to the Clarity Act, being pursued by the remnants of the defunct Equality Party as a key issue in its current agenda.

The Conservatives calculate they have nothing to lose in dividing the country and everything to gain, they can hold onto power for another term, set the political agenda to one of their choosing, handicap or politically destroy their opposition which relies on votes from Quebec, and when the times comes either crush the separatist threat they set into motion or accede to the wishes of a good portion of their own voting base and push Quebec to leave, after alternately promoting and ostensibly obstructing such perspective.

To their own advantage, the Conservatives played a more passive role during the Quebec Charter debate, allowing and/or encouraging the Liberals and NDP to take the lead in creating an anti-Quebec political climate throughout the rest of Canada. Once done, it's hard to undo and the Conservatives are simply seeking to build on this, push it further and play it to their advantage as such conflict is beneficial to them and harmful to their political rivals...

For a better Canada, Quebec needs to be tossed out now! No Quebecer is truly loyal to Canada. Lets face it, they simply can't be trust, any of them.

Time for them to go.

Once these anonymous Conservative supporters are finished driving everyone else suspected or accused of disloyalty out of Canada, there won't be anyone left but their own supporters, and even they are suspect, embrace American culture and values, are prepared to sell Canada's economy to foreign interests, etc. Some like Ezra Levant spend much of their energy engaging in "defamation" lawsuits against other Conservatives. It would be quite a circus ....

For certain Harper is no true Canadian, what-so-ever. Harper was Policy Chief for his, Northern Foundation of 1989. Harper had hired Wolfgang Droege and his Heritage Front, as security for Preston Manning.

Harper has no right to even live in this country, let alone govern. We went to war so we wouldn't have, such as Harper running this country.

Harper is AGAIN using his deceitful job action plan to gain support, from the people that detest him for his lies and deceit. Trust Harper? Not on your Nelly.

Simon, if you want to read something truly appalling, read vigil.net, and see what they say about federalists, Anglophones, immigrants and anyone else who isn't pure laine.
Where is Justin Trudeau on this subject? Heard Stephane Dion and he appeared to be in favour of the feds intervening; plus he said the PQ will milk this issue even when their lawyers have downplayed the significance of this court case.

I saw that story and yes people really need to understand that Harper is just a glove puppet for the Koch brothers and Big Oil. And they've been orchestrating and paying for the Keystone Show right from the beginning. You know, everyone focuses on the environmental damage caused by Big Oil, as they should. But people should also know that everything oil touches it corrupts, including our government...

hi Rene...I couldn't agree with you more. Canada is a big and complex country that needs big and imaginative leaders to hold it together. But Harper isn't one of them. I can never forget how he harnessed anti-Quebec feeling during the coalition crisis, and got his biggest numbers ever. To encourage that irrational hatred, and those who would force Quebec out, by cutting off their noses to spite their faces, is criminally irresponsible, and reason alone to drive him from office...

Oh please, don't be ridiculous. Quebec isn't going anywhere. And how can YOU trust a Prime Minister who is aiding and abetting the separatists? Isn't that TREASON ? And yes you're right. It's definitely time for the Cons to go !!!!

hi Rene...yeah if it wasn't so pathetic I'd shit myself laughing at those Con klowns who have the nerve to think they can throw Quebec out of Canada. And that expelling them would make Canada a better place. Instead of a far more boring place, that would be Conservative FOREVER. Like England would be if Scotland left Britain.
But you can't reason with those anti-Quebec bigots. They're too ignorant. And of course they can't grasp the essential truth: if they don't know Quebec, or the First Nations, or all the other tribes that inhabit this nation, they don't know Canada...

Well I don't mind if Harper lives in Canada, as long as he lives in Alberta, in a religious commune of a federal prison... ;)

hi there...I have read vigile.net but I can't take them seriously. Any rag that features the writings of Richard Le Hir is marginal at best. They're a small group of older sovereignists who are still harking back to the days when the legendary fat lady at Eatons told a million people to "Speak White !!!"
As you may or may not know, I have one foot in each solitude. So I have a great interest in keeping this country together because separation could be PAINFUL. ;)
I see the pluses and minuses of both groups, and I know they share enough things in common, and enough history, to work out their small differences and stay together...

Quebecers aren't Canadians. You are a conquered people and frankly should be treated as such.

Harper may want Quebec to seperate because they are more vocal about things they don't like. This will be especially noticeable should Harper begin to dismantle the health care system of Canada. No Quebec, one less protestor.

Why Harper has decided to do this now most likely has to do with his political base than anything elese. If Quebec wants to seperate, then it is up to them to decide how they want to do it, when it comes to what % of the pop. has to be in favour. What they get to take with them, may be up to the rest of Canada and the First Nations.