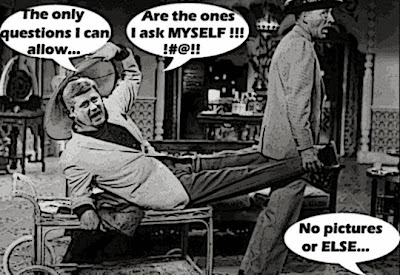 A funny thing happened on the Road to Kuala Lumpur. Stephen Harper threw a hissy fit, and further exposed his tyrannical tendencies.

The new gang of young fanatics in the PMO showed themselves to be Con klowns who will do ANYTHING to pleasure their depraved leader.

And Dave Ellis, the journalist, will be allowed on the Prime Minister's plane. After being banned for daring to ask a question.

Until someone in Stephen Harper’s office found a hidden stash of maturity Wednesday afternoon, Dave Ellis was going to be prevented from doing his job. Ellis is a CTV photo journalist with 28 years’ experience. His crime? He asked the prime minister a question in New York last week.

For that grave offence, Harper’s office was prepared to prevent him from boarding the prime minister’s plane Thursday morning bound for Kuala Lumpur, Malaysia, where Ellis was to provide the television pictures to all Canadian networks during Harper’s week-long trip, which includes an APEC summit.

Because Great Control Leader doesn't like spontaneous encounters with the media eh? Unless he's orchestrating them.

This is, after all, a prime minister who called Canadian journalists together following Margaret Thatcher’s funeral in London, so he could take a partisan swipe at Justin Trudeau. So the rules seem to ebb and flow in Harper’s world. The rules are based on whether he wants to answer.

It's unbelievable, it's frightening, it could only happen in Harperland. Where the Great Leader is out of his mind. The new/nouveau PMO is out of control.

In this case, a newly rebuilt Prime Minister’s Office, featuring Ray Novak as chief of staff (replacing Nigel Wright who resigned in the Mike Duffy affair), his deputy, the highly partisan and media-averse chair of the 2011 campaign Jenni Byrne, and MacDonald barely into his job as communications director, appeared to be sending a muscular signal to the press gallery as it seeks to gain control of the message heading into the second half of the Harper mandate.

And what makes it even scarier is that so many in the MSM, and so many Canadians, have allowed him and his gang of political thugs to get away with this outrageous behaviour for so long. Instead of standing up to that ghastly tin pot dictator and demanding that he respect our democratic traditions.

They let him get away with murder, when they weren't fawning at his feet, giggling at his ruthlessness, or calling him a political genius.

So we now find ourselves living in some shabby, sinister petro-state where civil servants are terrorized, scientists are muzzled, the media is intimidated or rendered impotent, the Big Lie rules, the truth is what he says it is.

And he would brainwash us like Big Brother with his grotesque Porky Actions ads... 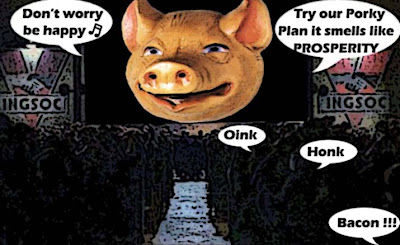 Brainwash us more than any other people in any other so-called western democracy.

And we are supposed to believe that this is NORMAL?

You know ever since I started blogging I've been trying to encourage Canadians to look at the big picture of this Con regime. Not one horrifying act or the other, but all of them put together. For only by doing that can you understand into what nightmarish darkness its depraved leader would take us.

And ever since I was teenager one of my greatest literary heroes has been another Simon. The one in Lord of the Flies... 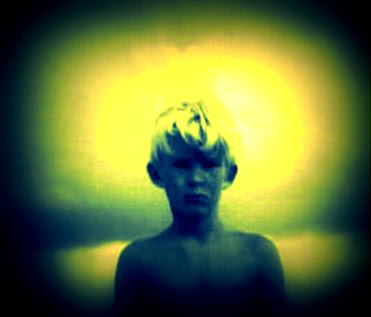 The gentle boy on an island full of young savages, who realizes that the real monster is us or them. Those who make up the lies, and those who believe them.

And of course is murdered by the savage mob for telling it like it is.

And the good news? This Simon can run faster than the other one, and believes in fighting back.

And I can see how we can use this tyrannical behaviour against Harper and his cult. How we can fit it into the wider narrative.

By stating these simple facts that nobody can deny: He lies all the time, he dodges the media, he muzzles and intimidates people.

And asking this simple question that even the mob can understand... 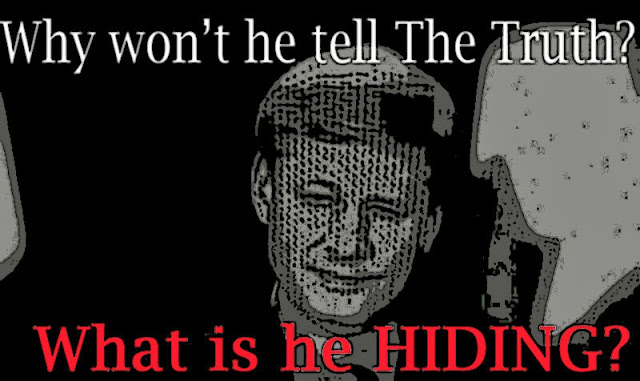 You know, I've been working with a group of artists trying to distill the horror of the Con regime into its simplest and most powerful message forms for use in a series of videos. And I'll have more to say about that soon.

But in the meantime you can confidently believe this eh?

The monster will be revealed. And voted off the island.

And the Cons will be defeated...

We went to war to fight Fascism and Dictatorship. Our young Canadian boys were shot and blown into fragments, so we wouldn't have such as Harper governing our country. Quite frankly, Harper is not worth their dying for. Hitler was the old face of evil. Harper is the new face of evil for these times. All Dictators have very similar personalities, such as Stalin, Hitler and Mussolini, including Harper's twisted personality.

Canada will long be destroyed before the next election.

Scores of Canadians are saying? Harper and Obama are setting us up for the NAU. Harper permitting American Police to operate in Canada. Harper setting our cost of living, as in the U.S. Now Obama is trying to have his Health Care, in line with Canada's. We all know Harper is cutting our Health Care, right down to the bare bones.