The Con Klown Tour and the True Horror of Harperland 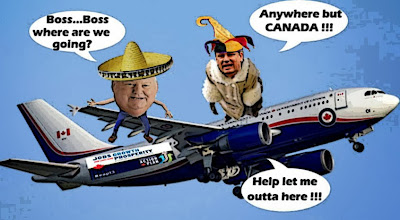 Oh no. Not more humiliation. Can you believe it? Stephen Harper's Great Escape Tour is on its way to Kuala Lumpur.

And I'm still waiting to hear from the CTV reporter who dared asked Harper a question. And who is no doubt now travelling in the baggage compartment.

But already I can see that the Con Klown Tour has run into a major obstacle: the President of China.

Prime Minister Stephen Harper could not have picked a less auspicious time to make his first visit to Malaysia. Harper’s three day stop in Kuala Lumpur, which begins Friday, is smack dab in the middle of the three-day maiden visit to Malaysia of Chinese President Xi Jinping.

So he'll be lucky if anybody even notices he's there.

Alas, as far as I can tell, not one Canadian flag has yet made an appearance in the streets of the capital. Nor has the foreign minister or the local media had anything to say yet about Harper’s impending arrival.

And while the Malaysians will be busy talking business with the Chinese, Great Economist Leader will be talking about...um...human smuggling?

Helping Malaysia fight back against human smugglers in its waters will be top of mind for Prime Minister Stephen Harper when he lands in Kuala Lumpur Friday.

And how we can help the Malaysians when we can't even patrol our own waters?

Oh boy. Talk about a make work project. Although I suppose it does make sense eh? He gets to pose as a refugee buster to please his rabid racist base. While he recruits foreign workers to steal their jobs.

Before heading off to Bali to pose as an economist... 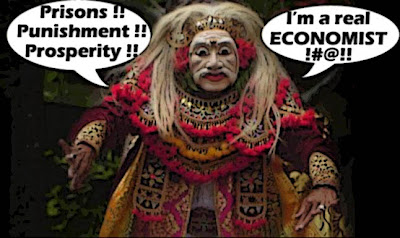 While back in Canada a former high ranking civil servant all but calls him a monster.

A former high-ranking public servant in Ottawa is ripping into the Conservative government’s tough-on-crime policies, saying they reflect a “deep, visceral nastiness” and actually “do nothing to reduce or address crime.”

For his failed crime policies, and his kinky desire to punish people.

That’s been reflected, she said, in the stripping away of privileges, such as access to weightlifting equipment, and reducing how much money inmates can earn. She said she’s even heard suggestions to feed the inmates less. 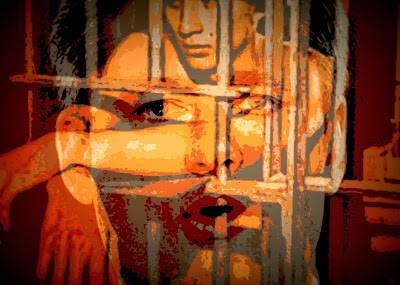 I mean can you believe that?

Gawd. Is that one sick puppy or what?

Oh boy. You know for years I've been trying to portray the true horror of Harperland. But I can never quite manage it eh?

Despite my best...or my worst efforts... 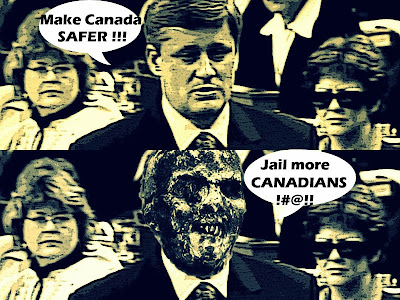 Because it's always worse than I can imagine. And I'd have to put on a rubber suit to be as kinky as Stephen Harper.

And now the final blow. Guillermo del Toro of all people has beaten me to it !!!!

Because this may be a promo for the Simpsons.

But it IS Harperland....

OMG. Wasn't that horrible? Did you see Jason Kenney chasing Bart, along with the Mummy and Frankenstein? Or was that Joe Oliver?

But seriously....I still think we can do better eh? And trust me we will.

So all I'll  say for now is please, please, let there be JUSTICE.

May the Cons be defeated or arrested.

May the monster get what he DESERVES... 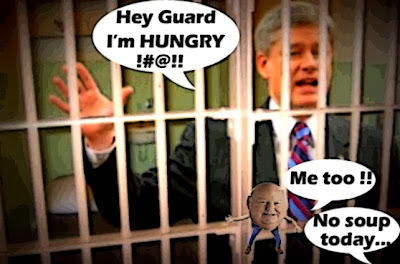 Harper doesn't care about his own people right here in Canada. The missing F.N. women, Harper all but ignores. We all know of the highway of tears.

We also know of Harper cheating our old and new Veterans. Just when you think Harper couldn't possibly go any lower? He does. With most Canadians, our Veterans come first. We want our Veterans to be cared for, come hell or high water. Harper's evil is very hard to grasp, among the decent Canadian citizens.

World Banks have a list of 250 countries, banned from global projects. 117 of those companies are Canadian. Investment in Canada have fallen from, $27 billion to $2 billion. Harper was warned regarding, a one economy country. Harper of course, was far too arrogant to even listen to his own team nor, anyone else. Investing in the tar sands, has fallen right off. What does Canada have left, to fall back on? Well, Harper is selling Canada off, chunk by chunk. Even selling off our own Canadian farmland.

Romanian people, are protesting a Canadian mine. In a South American country, there were 20,000 protesting against Harper and Canadian owned mines.

Other countries detest Harper's bullying and his hissy fits, when he doesn't get his own way. Harper is an old dictator from his, Northern Foundation days of 1989.

I'll be so happy to see the back end of harper and his crew.

hi anonymous...well I think you covered all the bases there. ;) But as I've said before, we know that the Con regime and its leader are awful, and the worst Canadian government ever. But what we need to do know is talk about what we can do to make sure we defeat them in the next election....

hi Steve...well Tom Steyer is a VERY good friend of Obama, and a big contributor to the Democrats, and I just finished a post on why Harper should be very afraid of him. So I think that was more than a dream you had. It was a PROPHESY !!!!

hi Sassy...well I'm just happy to hear from you !!! I hope everything is going well even as we endure these grim Harper years. But the worse they are the better it will feel when they are over. How to I know this? Prince Philip told me...and about 200 others. Told me school was like knocking your head against a brick wall. It felt so good when it was over. And he should know eh? ;)