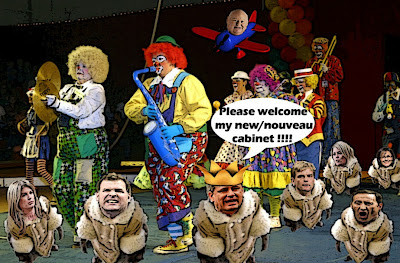 OMG. This is so exciting. Somebody beat a drum, or a gong. After four long months of preparations, Stephen Harper's Con klown regime is finally shuffling back to Parliament.

The almost new/nouveau cabinet has been groomed, manicured, given a full body shampoo, an extensive criminal record check, and taught how to repeat their PMO lines without wincing or gasping. Or looking like obvious LIARS.

While Great Desperate Leader is hoping Canadians have forgotten about Mike Duffy, and the sordid Senate scandal. So he can put his anus annus horribilis behind him.

And jump on the reset button

A political blueprint, a channel-changer, a bookend on an “annus horribilis.” Prime Minister Stephen Harper and his Conservatives have high hopes that next week’s throne speech will turn the page on a year marked by scandal and controversy.

The speech is expected to signal the government’s intention to put a renewed focus on consumer issues and pocketbook issues that can help win over voters.

So his ghastly Con artists can pose as "real economists" and consumer champions, to try to soften Harper's image, distract Canadians from the Senate scandal, or just BUY VOTES.

Like they've been doing all over the country since they shutdown Parliament... 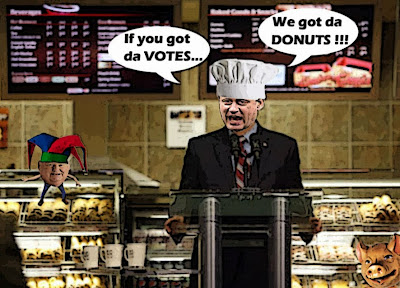 While also posing most indecently as champions of law and order. Can you believe that eh? Only in Harperland.

But unfortunately for them the economy is starting to look like a lead balloon, or a bitumen blowout. When a lot of Canadians think CRIMINALS these days they think CONS. 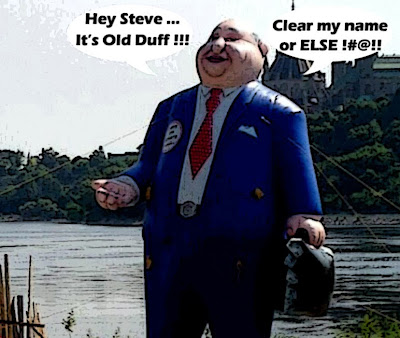 And thanks in very large measure to him and his Senate friends, I wouldn't be surprised if Stephen Harper's reboot is heading for a bruising encounter with a brick wall. Or a fatal collision with an ethics wall.

The Stephen Harper reboot is about to run up against the ethics wall. A mid-term speech from the throne that was months in the making could be a one-day wonder for the Conservatives next week.

No throne speech can turn the focus from a growing list of ethical transgressions that are mounting for Harper and both opposition parties are straining at their leash like a hungry dog which just spotted a steak.

And like Tim Harper I'm putting my money on the wall eh?

The government will tell us these miscreants are no longer in their caucus and that matters are before the police. But in the battle between the irresistible force, the throne speech, and the immovable object, the ethics wall, the smart money has to be on the wall.

Or on the hard ground... 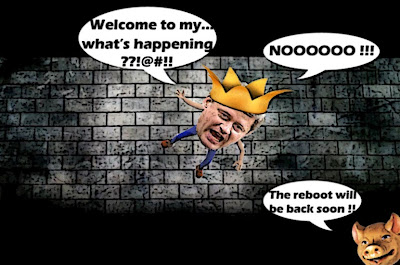 Golly. Won't that be an amazing show? I'm going to have to press the reset button on my PVR so I can watch it over and over again.

You know,  some in the MSM say the next two months could determine the fate of Great Humpty Dumpty Leader and his rotten egg regime.

So I say let's crack him and his Cons when they are down eh?

And scramble them real good...

.. the media will deliver the massage from our frothy conflict oil queen.. To a small extent the weighty deceits will be parsed, praised or prayed over on Bay Street, Edmonton and Victoria.. and in Alberttawa

The real analysis of the nonsense and snake oil song n dance will come from indy journalists, First Nations, naturalists, biologists, scientists, clinicians, teachers.. economists and ordinary concerned Canadians that know what political horseshite smells like and looks like.

Watching the Harper Caucus gobble up the processed PMO and Prime Ministerial Poop will be revolting.. but watching them clap like trained shite eating seals at every excretion will be truly nauseating..

Let's all hold our breath, cover our mouths, avert our eyes.. then wait n see how long our dear Steve n Ray can avoid Question Period.. and what bizarre responses are emitted.. and from what orifice, what 'honorable' thug or whipped MP ..

I have no idea of just how can anyone, support the monster Harper? His speech from the throne will be, lies, deceit, corruption, dirty tactics and we know, Harper cheats to win. Harper doesn't even have the right to live in Canada, let alone govern.

We went to war so we wouldn't have, such as Harper governing this country. Harper's team is useless. They are, useless, gutless wonders.