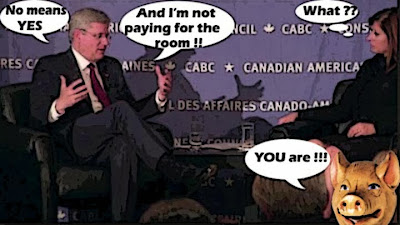 Oh no. Not ANOTHER sordid Con scandal. How many more can we endure, how much longer can Stephen Harper keep debasing himself, shaming us in the eyes of the world?

And how dare he make the TAXPAYERS pay for HIS political debauchery !!!

When Prime Minister Stephen Harper touted the Keystone XL pipeline in front of a business audience in New York City, his appearance was among events at a hotel that cost Canadian taxpayers more than $65,500, CTV News has learned.

The host usually picks up the tab for its guest speakers at such events. A hotel bill mistakenly sent to CTV’s Washington bureau shows that Ottawa was on the hook for a total of $65,582.91.

Can you believe it eh? They set-up a cheesy little event so Harper can threaten Obama, and pimp for Big Oil. Along with their Keystone pals at the Canadian American Business Council.

There are other red flags: Andrew Shaw, who works for the business council, is listed as a lobbyist for the Keystone pipeline. The Canadian American Business Council, which claims to be a “non-profit, non-partisan, issue-oriented organization,” has offices inside a major law and lobbying firm in Washington that represents TransCanada’s Keystone project.

And they can't even pass the cowboy hat around and pay for it themselves?

NDP’s foreign affairs critic Paul Dewar said Canadian taxpayers should not have to cover any costs. “It is entirely wrong and totally unethical,” he said.

And BTW that reminds me...since we're talking about that extended photo-op in New York City.

In the matter of this shiny bauble...

The host of a U.S. television morning show got a nice trinket, courtesy of Prime Minister Stephen Harper. Norah O’Donnell, co-host of CBS This Morning posted a photo on Instagram Wednesday of a silver keepsake in a blue box, along with a card that read, “With the compliments of Stephen Harper Prime Minister.”

What DID the political thugs in the PMO tell poor Norah? 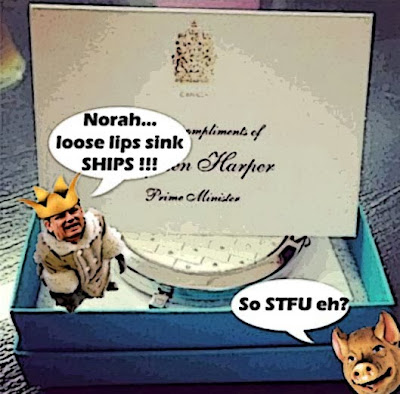 The picture was removed from Instagram soon after the Prime Minister’s Office started getting questions from the media about the gift.

And do they have to try to cover-up EVERYTHING?

Gawd. How desperate are they? And how can we trust ANYTHING they tell us?

And of course the answer is they're very VERY desperate, and we can't trust a word they say as far as we can spit.

Just work harder than ever to evict that grubby gang from office.

And put their sleazy leader where he belongs... 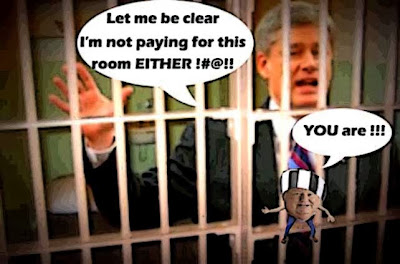 So Stevie sent a cheap gift thanking Norah for having to put up with his bullshit, is all that was. He must think she’s as dumb as his mud dumb stupid Con base. But no, I'd wager that surely she's not dumb enough to not know Harper hasn't done anything positive on the women's maternal health file or for the 50,000 or so women EVERY YEAR around the world who die from unsafe abortions. No Harper government money will ever be used to provide safe abortions, ever, to appease their rabid fundie base. Not even child brides or rape victims get an exception. If they get pregnant, that's their problem. Harper's record on alleviating human suffering is pathetic, and is far LESS about helping the world's poor or the world's women than it is about helping Canadian mining companies get hold of mineral wealth in the developing world, even if those companies, and they do, violate the human rights of indigenous peoples in the region. Meanwhile King Kon Klown sticks us with a whopper of a bill.