Why Leona Aglukkaq Must Be Fired Immediately 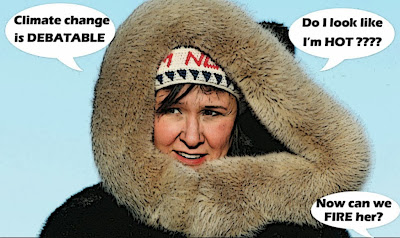 You'd think she would do all she could to help and protect the people who live in the arctic from the devastating effects of climate change. Her people.

But no, Leona Aglukkaq is no Minister of the Environment. She's just another shabby Con climate change denier.

Prime Minister Stephen Harper’s environment minister is casting doubt about scientific observations of melting summer sea ice in Canada’s north. In a short televised interview on CTV’s daily political show, Power Play, Leona Aglukkaq suggested the scientific observations were not as important as the Harper government’s priorities in its new role as chair of a group of Arctic nations.

When asked by Martin if she had personally observed changes in the Canada’s north, Aglukkaq, who represents the riding of Nunavut in Parliament, sighed before saying it was “debatable” whether the Arctic was warmer, explaining that northerners experienced a cold summer in general with snow in some areas.

Can you believe that? And so soon after making a complete fool of herself by all but ignoring the Intergovernmental Panel on Climate Change report. And attacking the NDP's nonexistent carbon tax. 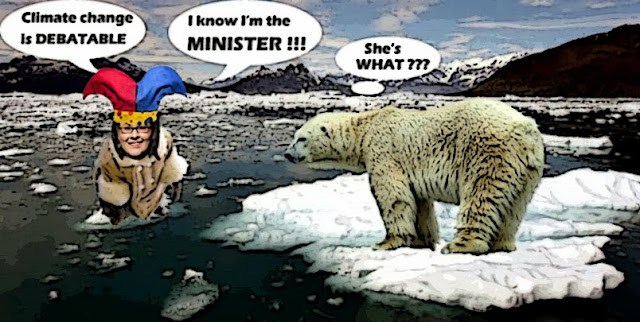 "Unlike the previous Liberal government, under whose watch greenhouse gas emissions rose by almost 30 per cent, or the NDP, who want a $21-billion carbon tax, our government is actually reducing greenhouse gases and standing up for Canadian jobs," Aglukkaq said in the release.

But then why should we be surprised eh? When this whole new/nouveau Con cabinet is just a bad joke. Agglukkaq is no Minister of the Environment.

Just like Rona Ambrose is no Health Minister. How could she be? When she would put her own foul ideology before the lives of some of the sickest and most vulnerable Canadians. 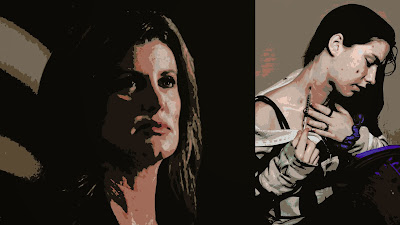 Health Minister Rona Ambrose announced this afternoon that Health Canada will never again allow doctors to provide prescription heroin to patients through the Special Access Program (though she did suggest doctors who wished to do so could attempt to pursue the matter through provincial routes).

Or put her moralistic crap before harm reduction and scientific evidence.

Here is how the European Monitoring Centre for Drugs and Drug Addiction summarized the global research in this regard. A small population of chronic heroin users, once thought to be ‘untreatable’, is now benefiting from a novel type of therapy using medicinal heroin as the substitution drug. In a new report out today from the EU drugs agency (EMCDDA), experts describe the development as ‘an important clinical step forward’.

It's depressing, it's pathetic, it's CRIMINAL.

But then again why should we be surprised eh? When it all comes from the diseased mind of Stephen Harper, the climate change denier who once claimed that carbon dioxide wasn't a problem.

It would take more than one letter to explain what’s wrong with Kyoto, but here are a few facts about this so-called “Accord”: — It’s based on tentative and contradictory scientific evidence about climate trends. — It focuses on carbon dioxide, which is essential to life, rather than upon pollutants.

The Kyoto killer who is now trying to fool the Americans into believing he's a REAL environmentalist... 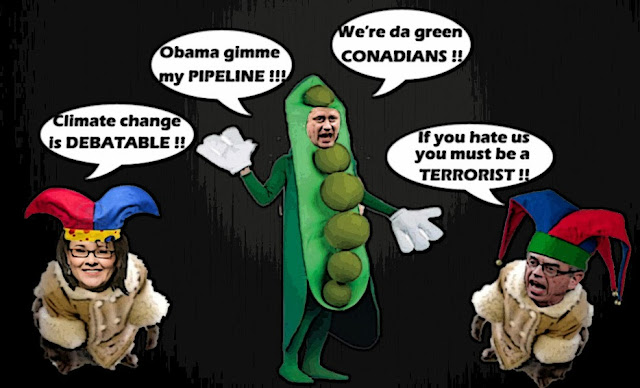 The leader of the pathetic gang of Con artists, who also happens to be the maniac who secretly believes that medicare is socialism. And is doing all he can to destroy it, or privatize it beyond recognition, by making the provinces too poor to afford it.

The Conservative government is downloading billions of dollars of health-care costs on the provinces, says the parliamentary budget officer, making federal finances sustainable over the long term but leaving provincial governments to stare down severe financial pains in the coming years.

As I've warned again and again. Because that's the way he operates. Stealthy, stealthy, creepy crawly, and the knife in the back.

Oh well. Surely Canadians will wake up soon and realize this isn't a Canadian government it's a sinister Con klown show.

And in the meantime let's get ready to greet Stephen Harper's new/nouveau cabinet when it shuffles out of the darkness and into the light again... 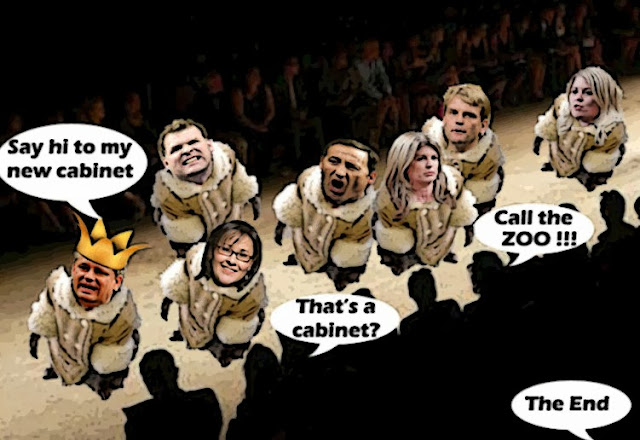 Get your peanuts ready.

Try not to laugh too loudly eh?

And then ask yourself this happy question:

Why fire one two three four of those Con monkeys?

When we can fire them ALL...

Great to see a more modest enviro minister at last.

The headline of this piece and the first line are misleading. Anyone watching the video at
http://www.ctvnews.ca/video?clipId=1015955
can see she did not "cast doubt on climate change" or that ice melts this time of year, or that there has been overall ice melt over the decades in the North, etc. She is being sensibly cautious about a complex field she undoubtedly does not properly understand yet.

Give her a break while she gets up to speed on this exceptionally difficult portfoliio, folks. There was nothing reckless or alarming about her very humble and sensible comments. The previous enviro minister, Peter Kent, referred to the author of the above article as an activist, or words to that effect. I wouldn't take the piece above seriously as it is making a mountain out of a molehill.

Prior to working with the NRSP, Harris was a Director of Operations of the Ottawa office of a Canadian PR and lobbying firm called the High Park Group (HPG). Harris has also worked with APCO worldwide, a group known for creating The Advancement of Sound Science Coalition (TASSC) which worked to advance tobacco industry interests.
Stance on Climate Change

Tom Harris's International Climate Science Coalition asserts that "global warming has generally been highly beneficial," and that "Global climate is always changing in accordance with natural causes and recent changes are not unusual." [2]
Key Deeds

Tom Harris was a speaker at the Heartland Institute's 7th International Conference on Climate Change (ICCC7).

DeSmogBlog researched the co-sponsors behind Heartland's ICCC7 and found that they had collectively received over $67 million from ExxonMobil, the Koch Brothers and the conservative Scaife family foundations.

In 2005, Harris was listed as an "associate" for the public relations firm APCO Worldwide, with his areas of expertise being communications; science; technology; energy and environment. [7]

APCO was hired by Philip Morris in 1993 to create a front group titled The Advancement of Sound Science Coalition (TASSC). TASSC manufactured a public relations campaign with the purpose of discrediting any science that suggested tobacco increased cancer and heart problems. It also advocated industry-friendly positions on global warming and pesticides. TASSC labeled environmentalists as promoting "junk science" whale the Coalition advocated what they describe as "sound science."

With all due respect, Mr Harris, Minister Aglukkaq has had nearly three months during which Parliament has not been sitting in which to "get up to speed." I might give the MP a break, as you suggest, but her abysmal performance as Minister of Health suggests that she is simply not up to handling an exceptionally difficult portfolio.

So harris, another overpaid, underworked right wingnut waterboy has decided to visit yer blog, Simon. Good job! When "they" are coming to your home turf to defend their own, you are having the desired effect. Mazeltov!

hi Tom...actually I feel I have been giving Leona a break all of her political life. Because she is the first Inuk federal cabinet minister I want her to be a good role model for others. But she was a totally useless Health Minister, because she just sat on her hands, even though we have a demographic crisis about to swamp our health system. Which is why I fear that she will do the same thing as Minister of the Environment. Even though I believe climate change is an urgent problem that needs smart thinking and a proactive minister. But we'll see, maybe it is too soon to judge her. I'm willing to give her a little more time to get up to speed. But she's off to a lousy start...

hi anonymous...thanks for the bio. I have to admit I had never heard of him. But I try to stay away from the climate change debate, because for me it's not a debate it's a menace, and the risk in my view is too great not to be urgently and creatively addressed. However, Tom and others who don't share my views are welcome here, I'm always friendly and polite to those who take the trouble to write a comment. But I'm as stubborn as a mule, so they'll never change my mind... ;)

hi Brian...good lord, has it been three months already? The absence of Parliament is making me lose my democratic bearings. But you're right, three months should be enough to be able to do better than just repeat PMO talking points, like that Big Lie about the NDP carbon tax. And her performance as Health Minister was abysmal. As I told Tom, Leona is one of the very few Con Ministers I hoped would do better because of the role model she could be for her amazing people. But I'm starting to think that she's a hopeless case...