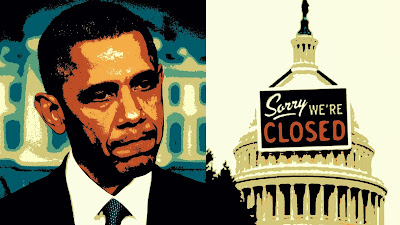 Well yank my doodle dandy. One more good reason why right-wingers should never be allowed anywhere near a democracy.

For the first time in nearly two decades, the U.S. federal government staggered into a partial shutdown Monday at midnight after congressional Republicans stubbornly demanded changes in the nation's health care law as the price for essential federal funding and President Barack Obama and Democrats adamantly refused.

Can you believe those rabid teabaggers? Holding a country hostage to kill a HEALTH BILL?

But then like Cons everywhere, they are the terrorists who target democracy... 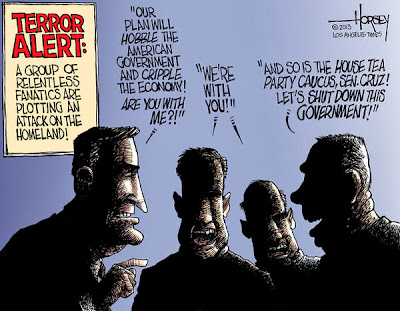 “This is just like The Godfather. You know the scene where Michael Corleone is learning how to kill the crooked New York cop? The guy teaching him, Clemenza, comforts him and says ‘This thing’s gotta happen every few years or so. It helps to get rid of the bad blood.’ That is what arguing over all this is like.”

Great eh? We're their helpless neighbours. And the mobster Peter Roskam is one of Boss Harper's good buddies.

It looks like Obama is going to play hardball...

By pitting independents who vote Republican against the teabaggers, and splitting the Grand Old Party. And then kick them in the head until they cry scream Uncle Sam.

And the obvious lesson for Canadians?

If we want to protect our democracy from the Con terrorists.

We've got to defeat them beyond recognition.

Take back our Parliament.

And get that Con teabagger outta there... 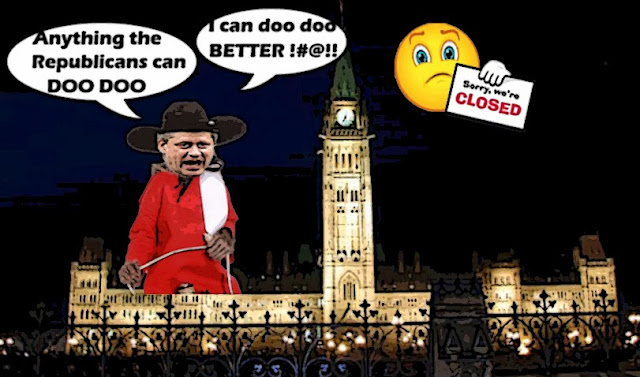 There some that believe, this fiasco is part of the NAU plot. Harper has American Police operating in our country. Harper is now lining up Canada's cost of living, with the U.S. cost of living. Both countries need, identical Health Care programs.

Read: Harper gives a speech in New York at, the Council of Foreign Relations. This was Sept 25/2007. Harper fully endorsed the NAU. I believe I read? Our currency would be, the Amero dollar.

Harper has lied, deceived, is corrupt, used dirty tactics and cheated to win. Most Canadians say, Harper cheated to win with, his robo-call fraud.