A New Union Declares War on the Con Regime 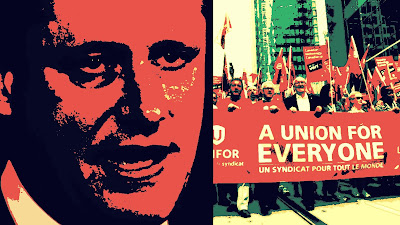 It's really great to see that Canada's newest union is declaring war on the Con regime.

The labour movement will soon be getting off its defensive position and pushing back if government and employers continue relentlessly attacking workers, warns the leader of Canada’s new super union.

And that its leader Jerry Dias is asking the question so many Canadians like me have waited so long to hear: "Are you ready to take your country back?"

Because it's about time eh?

And what I like best about the new union, apart from its fighting spirit, is that it's going to try to reach out to young workers, who are bearing the brunt of the unemployment crisis, as well as creating community chapters.

Unifor's new constitution has many progressive features. It requires gender equality on the national executive. It commits 10 per cent of national dues to organizing. It calls for "community chapters" that "can help build strong communities and enhance our collective strength in the struggle for social and economic justice by opening our Union to workers who currently have no access to union membership, because they have no collective agreement, or job, or hold temporary contract or other precarious employment."

Because we've never needed a strong union movement more than we do now, if we are to stop the Cons from further wrecking our country and its values, turning us into a low wage economy, and selling us out to foreign interests.

Yup. I'm excited eh? And tomorrow I'll be there when the new union marches in its first Labour Day parade. To cheer them on and pay tribute to the labour movement without whose massive contribution over the years we would have no rights, no social progress, and live like SLAVES.

And I invite you all to do the same wherever you live in Canada.

Because the time really has come to take back our country.

The time has really come to decide whose side we're really on...

Down with the Con regime...

Workers of the world unite, you have nothing to lose but the CON millstone, dragging the economy down to Laos or perhaps Burundi standards. With you not far behind those norms.

Unions: go for the jugular and let's see how vulnerable these ideologues are. Can't wait for the first real confrontation. Fraser Institute will need Depends. Catherine Swift will be fulminating.

Should be brutal. Couldn't happen at a better time in history.

The Reform lackeys of the corporate agenda, bigots, hate-mongers and toadies of the oil state are voicing their fear and hatred of Unifor :

"You can't fight globalization, you can merely work with it. Try to fight it and you will lose."
"This merger is scary, but unlike in other businesses, no government can block it"
"Unions are not longer relevant in Canada"

So evidently this new union heralds a positive and welcome development if it strikes fear in their fascist hearts ......

hi anonymous...I'm just glad to see anyone fighting back in this country. Or just standing up and making noise, and trying to find new and modern ways to get their message across. Because let's face it eh? When the definitive chronicle of these times is written, it will be clear that the real horror story was not what he did to us, but how passive and disunited we were. And how easily fooled.
As for the comments, I hadn't thought about it but you're right. I do get far fewer comments than I once did. I'd like to think it's because my outrageous over the top style, makes them think I'm a wild eyed Harper hater almost as crazy as he is.
Or that if they leave a comment they will automatically be added to Great Dark Leader's Enemy List. And they're probably right about that one eh?
But I suspect the real reason is that commenting is down on most small blogs like mine because the conversation has moved to Twitter, so it can happen in real time. While on this blog unfortunately, due to my state of perpetual disorganization, getting a reply from me can take DAYS... ;)

hi anonymous...well of course you're right. They're probably tracking as closely as the Con War Room. I try not to write words like Al Qaeda or Ed Broadbent, but ever since I wrote a post denouncing the barbaric treatment of Omar Khadr, and one about the secret Harper-Ford BBQ they have been on to me. But of course now that you wrote the word NSA they're following you too... ;)

hi Rene...thanks for the good news. I'm glad the birth of Unifor is making the Reform stooges quake in their boots. It's about time somebody did. And it couldn't come at a better time, when so many progressives are depressed or demoralized. We badly need new ideas and new energy, we need movements as well as parties if we are not only to defeat the Cons but build beyond that. I'm not quite sure about the name Unifor, I would have preferred something like The Clash, but you can't have everything eh? And since the baby comes from good stock, I'm sure it will be awesome...

It makes me chuckle when i read in anonymouse's comments that no one ever comments on your blog..compared to mine you get tons of comments..
I too am really looking forward to Unifor's ascension, but don't expect too much too soon..yes they've committed a portion of their money to organizing, and that is relevant, but what needs to happen first ( and forever after) is education...young workers often have no knowledge of or experience of unions and what they can (and can't) do for them..
I agree that it's past time for a fightback, but some knowledge about what it takes to organize and maintain membership through hard times is an absolute necessity..
As a retired union activist and one time Local president, I can attest to the fact that even in a traditional union setting (and I belonged to the biggest union in Canada, CUPE) the ignorance and lack of caring of members is phenomenal..
The fact that Unifor is a progressive and unique way of doing things bodes well for it, but an ongoing presence in the everyday life of it's members and non-members(no one can undermine a union movement like a hater) is critical to sustain any gains made, as well as to maintain the status quo...
There are many retired union types who would love to help with this work..I offer not to interfere, but to educate, because that never happened for me or my brothers and sisters in the past..

Harper has signed a deal with, the Communist China Army. While our military and the Police would be reluctant to fire on Canadians. China would most certainly do so. China fired bullets, into protesting Chinese students. The blood diamonds, Mugabe and the China Army leave no doubt. Harper also wants to force the Enbridge pipeline through as well. Harper is giving the rich resources in the High Arctic, to China as well. Harper handed the key to China, for the tar sands. Harper has already given Communist China Nexen. Harper has given mines and mining jobs to China. China also wants the timber on Vancouver Islands and the mines. Harper is selling our farmland to China too. China has polluted much of their farmland and 40% of their water. Dead pigs come floating down China's rivers.They will need our food crops to feed people in China and, the thousands coming to Canada.With Harper's FIPA deal with China? That means China will take over Canada, for 31 years. If Harper ratifies that FIPA deal with Communist China? We can kiss Canada good-bye.

I signed the petition against, Harper's FIPA deal with China.

Six years from now is the centennial of the 1919 Winnipeg General Strike. It will be here before you know it. Much should be made of its social importance on how things developed. It would help "sell". The "Good" Old Days Are Here Again.