Is Stephen Harper Cracking Up? 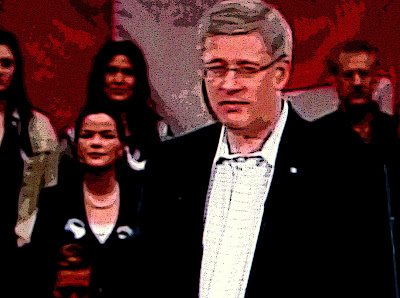 It sure looks like it. Yesterday the nasty bully challenged Michael Ignatieff to a one-on-one debate.

But less than twenty-four hours later he was running away like a coward. Or a chicken.

Each would invite accusations of cowardice if he backed down. So Harper has tried his best to depict Ignatieff as being the one to back out of a one-on-one debate.

And that's a lie.

Kinsella dumps all over Harper today as a "chicken."

It's worse. In this incident, Harper has shown himself to be cowardly and a liar.

But it gets worse. You should have seen the look on Harper's face when the media confronted him this morning.

I thought I could hear the voices in that thug's head shouting "How DARE they bully us  !#!@#!!!

Yikes. For a moment I thought he was going to start blubbering, and calling for his mummy.

It really makes you wonder doesn't it ? What IS the monster hiding?

Or should that be ...isn't it amazing what a difference a day makes?

The Conservative lead over the Liberals literally shrunk overnight from 10 points to just over six, according to a Nanos Research poll of voting intentions for the Globe and Mail and CTV.

Golly. You know last night, in an inexcusable lapse of taste, which earned me the contempt of my loyal labrador.

And is so unlike me eh?

I suggested that we set this attack lab on him to do...um... unspeakable things to him. 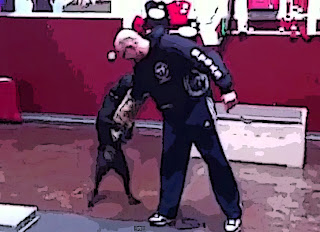 Or stimulate him so much he'd forget to take his medication.

But now that Harper is looking wounded. And Jack Layton and Gilles Duceppe will be joining Ignatieff in ganging up on him.

After much deliberation, and after apologizing profusely to my canine companion.

I think the debate is going to look more like this...

The liar is cracking up. The bully is on the run.

The poll showed what really was happening was that NDP and Green support fell significantly and the Liberals made the gains at their expense, since the Conservatives actually gained slightly (39% would not be a majority though with the Liberals breaking away from the NDP and Greens). That sounds like the left is starting to coalesce around the Liberals. Jack Layton would be the big loser there.

I'm not surprised that progressives seem to be coalescing around the Liberals. I have never seen the left so united in a single cause before,as they are about defeating Harper

hi Craig...it does look like a lot of progressives have decided that this time they can't afford to split the vote, however they feel about Ignatieff. I also think that Ignatieff is actually benefiting from the Con attack ads, because the more Canadians see him, the less he looks like the character in those awful ads.
It's too soon to jump to any conclusions, but if that trend continues, Harper will find it very hard to get a majority...

hi Kev...yup I agree with you. I feel bad for the NDP, but with a divided left facing such a threat from the right, how else can progressives react?

One risk that does exist is if Ignatieff gets too cozy with left-leaning voters, some centrist/centre-right Liberals (think John Manley, early Paul Martin, a few other Liberals), especially in centrist suburban ridings like in the 905 area which oppose rural hardline conservative agendas but also strong progressive movements of the cities, may bolt to the Conservatives and push them solidly into the 40s. The Liberals would have to destroy the NDP to get close to that themselves and create an American-style two-horse race outside of Quebec.

hi Craig...there are many dangers ahead, but I don't think this election is going to be decided along ideological lines. If that was true so many apparently NDP supporters wouldn't have switched to the Liberals. In the end this election is going to come down to whether people trust Harper with a majority. And whether they fear a coalition more than that prospect.
The Progressive side hasn't even started to paint a picture of what that might look like. Or even started asking Harper why he REALLY wants a majority so badly. The moment they do that (cue the scary music) I wouldn't be surprised if some of Harper's support crumbled. So yes, I'm going to wait a bit before I put on my party hat, but I'm still feeling a lot more optimistic than I have for a while, and it's going to be a very interesting and exciting campaign...