The Coalition and the Dirty Game 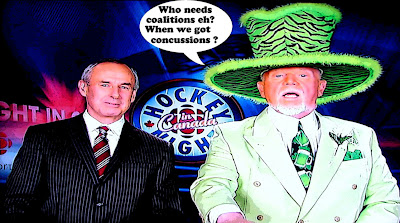 I hate to bring Don Cherry into a discussion about anything eh? I realize I'm living in Con Canada, and that he's the Redneck Messiah.

But my scientific background tells me that the neverending demonization of the word  COALITION is beginning to resemble a brain injury.

It would be “crazy” to vote for anyone but a conservative majority – a minority would allow the opposition parties to form a coalition – their “hidden agenda.”

And I'm really worried about Stephen Harper. Because any leader who would make the word coalition sound threatening, even though he formed one himself.

Is clearly trying out for the role of Big Brother.

And when he accuses Ignatieff of having a  "hidden agenda" you really have to question his nerve...or his sanity. 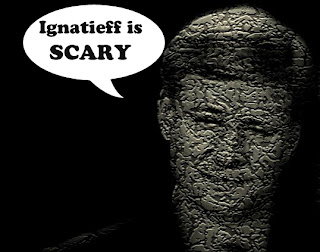 Because anyone who thinks that a coalition government would be scarier than a Harper majority must be a Con ...or an IDIOT.

But of course what he is really doing is trying to change the subject, away from corruption, lobbyists, and escorts. And once again preparing to pit English Canada against the evil separatists...read Quebecers. Like he did during the last coalition crisis.

And in that regard Michael Ignatieff also gave himself a minor concussion.

Because let's face it eh? That won't win him any votes in Quebec where the idea of a coalition is popular. But then Ignatieff was caught between a rock and a hard place.

If Ignatieff said he would consider a coalition depending on the election outcome, he would risk associating himself with a term that has become a "bad brand," Russell said. But if Ignatieff said no, he would limit his options following the election or risk backlash if he eventually changed his mind. In fact, precisely what happened to his predecessor, Stéphane Dion.

And Harper wouldn't be able to get away with it, if the MSM wasn't playing his dirty game.

I watched the campaign launch this morning. Harper, sounding somewhat like an insane person, said we have a clear choice to "elect a stable majority government or a reckless coalition." In a pretty long speech, he shrouded the threat of a coalition in almost every pronouncement. His tone was, "If you're not voting for me, you're voting for the Devil."

This was to be expected. I have to say though -- and I try to avoid media-bashing -- the Ottawa reporters are shrill and single-minded in playing Harper's game. They are loudly demanding to know if Michael Ignatieff is planning to form a coalition and, in hectoring him mercilessly, are succeeding in demonizing the idea of a "coalition" just as if Harper had written the script.

Oh well. At least now Ignatieff can tell those media stooges to take a hike. Or read the statement. Or explain why they find a coalition so menacing.

Today Harper had everyone playing his dirty game.

But tomorrow we can get back to BASICS...

remember what they did to David Orchard

Day one of the campaign and Harper has shown us the key to defeating him, he flounders like his hero GWB when forced off script.The opposition needs to exploit this weakness by consistently throwing curve balls at him and give him the opportunity to hang himself as he has done in past election campaigns.

I hope he has the same "success" on the campaign trail as Stockwell Day had a number of years ago.
Remember that campaign? Heeheehee.

I really wonder when Harper ever had an original thought. After all, for the last 5+ years, he has
avoided the press as much as possible and gone so far as to instruct security to barricade the press at public events.

What sort of courage is that?

hi Oemissions...you know how I feel. I see a coalition as a good thing, and the only way to reflect the views of all of those who don't support the Cons. And I don't see the Bloc Quebecois as the enemy. They can't do anything to bring about sovereignty, most French-speaking Quebecers vote for them for other reasons, and they are a bastion of social-democratic values. But unfortunately a lot of progressives can be convinced to reject their natural allies, and the Cons are the winners...

hi Kev...I agree with you but getting Harper off script won't be easy because everything the Cons do is scripted down to the last detail. But I must say that I found Harper looked a little desperate today, and that's always a good thing... :)

hi Torontonian... Everything will depend on whether the opposition can hit him where it hurts with their attack ads. Because as I said before the campaign began, it will all come down to whether Canadians trust Harper with a majority. He's clearly trying to make the spectre of a coalition a distraction. But if Canadians find his attacks on one half as bizarre as I do, he'll be in big trouble.
Trying to make the opposition look more dangerous than he is won't be easy... :)

hi Beijing...the man oozes contempt for our parliamentary system, and the truth. He really thinks that he can fool people into becoming like him, by repeating one outrageous Big Lie after the other. If we told someone from another country that Harper believes coalitions are satanic, they'd take one look at him, and run for their lives.... :)

@Torontonian, I used to think that Harper avoided the press because of a disdain for them, I now know it is because of fear, there is simply very little of substance to his intellect. The jerk is a fraud and a coward and a not very bright one at that.

Hi Simon, while it sure isn't easy to get Harper of message, it is most assuredly worth the effort.