The Cons Go After the Brown People 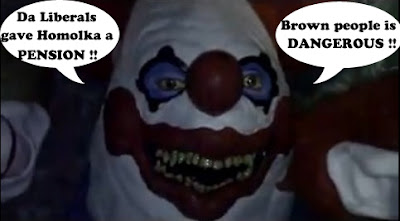 Well one thing is for sure eh? Stephen Harper's foulness knows no limit. His hypocrisy has no bottom. First he sends out his stooge Jason Kenney to recruit the ethnic vote.

By whatever means necessary.

Now in the latest attack ad from the Con arsenal, he's posing as a crime fighter, courting the white racists.

And going after the brown people...

Can you believe that racist ad? From the scummy Cons who won't tell us how much their insane crime package costs. Or hide their contempt for democracy.

From the Con mob that would corrupt our democracy further, by buying votes with our money.

The Conservative government is planning to spend up to $4-million on a taxpayer-funded ad blitz to promote its 2011 budget, a media buy that will start just days before an increasingly probable spring election campaign.

Stealing an election before it even happens.

Oh boy. You know I realize many progressives are afraid of an election. And I don't blame them. Warren Kinsella warns against being too emotional.

But if the corruption of democracy isn't worth fighting an election over, what is? And if not now, WHEN?

Besides aren't we underestimating what we might do in a campaign, with the kind of material the Cons have given us? I'm already seeing some good progressive attack ads sprouting on YouTube.

And I'm working on a great one eh?  Where Jason Kenney crawls up Stephen Harper's ample asshole, and comes face to face with Bev Oda. Riding around in a limo with the In and Out gang.

Golly. What a dilemma. My head tells me to be smart. My nose tells me I can't stand the stench of living in Con Canada anymore.

And my heart tells me that when good people work together.

The results can be AWESOME...

Believe in yourselves people. We ARE better than them. We are MORE than them.

And if we work together.

We CAN defeat them...

It's all part of Stephen Harper's War on Everything.

hi anonymous... OMG. I want the blue panties with the black spots !!!!

I have no idea.I don't have a degree in economics or criminology.

All I know is that Jimbo Flaherty can only count to twelve....with his toes.

And that if I don't order my panties quickly, Jason Kenney will run off with them all... :)

hi Sassy...what an excellent name for what's going on.
Stephen Harper's War on Everything.
And what a scary thought, especially if he gets a majority. I console myself by thinking that sooner or later the voices in his head will start fighting themselves,and smoke will start pouring out of his ears... :)