The Foul Hypocrisy of Stephen Harper 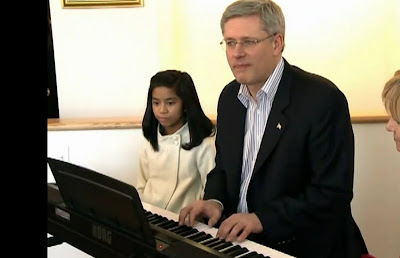 I'm sure many of you have seen this YouTube video of Stephen Harper singing "Imagine" with little Maria Aragon.

It was weird and horrible. You could almost hear the voices in his head singing:

"Imagine if we had a MAJORITY."

"We could do what we WANTED."

But believe it or not I found this video even CREEPIER...

To see Maria sing these lyrics:

Don't be a drag, just be a queen
Whether you're broke or evergreen
You're black, white, beige, chola descent
You're lebanese, you're orient...

No matter gay, straight or bi
lesbian, transgendered life
I'm on the right track, baby
I was born to survive

And see Stephen Harper sitting there smiling like a hyena, pretending he was half human, and agreed with what she was singing, was almost more than I could bear. Everyone has their limits eh?

When in fact that ghastly demagogue is stirring up the demons of racism and xenophobia... 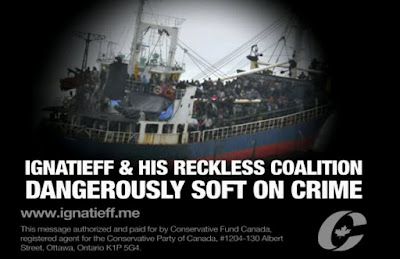 And he recently refused a request from Dan Savage to make an It Gets Better video to help fight bullying.

The PMO didn't even bother to reply.

What a ghastly hypocrite, what an awful man, what a creepy political pervert. Who would do ANYTHING to win a majority. Even take advantage of a child. Vomit.

Maria Aragon is a sweetie. Stephen Harper is a PIG.

Holy crap did Harper ever look like he was struggling during little Maria Aragon's performance of Gaga's "Born This Way". It felt like he kept latching on to the few references to God in the song to keep his brain from exploding.

hi Beijing...it was truly a horrifying spectacle. And yes Harper was obviously struggling to look human. But all I could think of was the Wolf and Little Red Riding Hood.
I was impressed by Maria though, I thought she sang the gay lyrics louder than the rest and right in his face. When she's old enough to vote I bet she won't be voting Con... :)

Yeah, Harper is a disgusting hypocrite for trying to associate himself with a sweet and talented little girl doing great for herself. However, I say: Bravo to her for showing the courage to sing that song in front of him - I actually felt like she was using its lyrics to lecture him on his lack of humanity.

Wouldn't it be grand if the media used one of their precious four questions today to ask him how he feels personally about those lyrics. Imagine, too.

hi Scott...now that I looked at the video again I do think Maria was sending out a message. And the way his face started twitching I think the message was received... :)
As for that question... I just wish someone, anyone, would ask Great Ugly why he believes that gay people CHOOSE to be gay. Like the theocons in the U.S. But I've been waiting for five years and
nobody ever does...

i wrote a long post that appears to have been eaten by blogger's failure to process my request.

got to get the little guy his breakfast so quickly.

OLDEST DAYS - homosexuality like other things an abomination. you can kill people for it.

NOW DAYS - homosexuality (for social oppressors) a "choice" and lazy-minded majority believe closet-cases who for whatever reasons with whatever sincerity, believe it is a choice which can be fought.