The Pope, the Jews, and the Gays 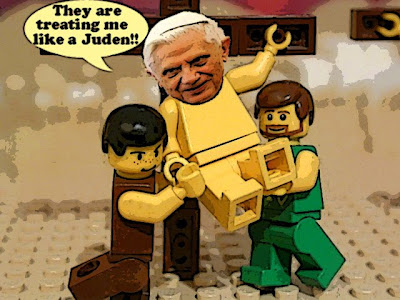 I see the Vatican's latest attempt to portray Pope Benny and his Catholic hierarchy as victims rather than enablers has backfired disastrously.

"They're sitting in the papal palace, they're experiencing a little discomfort, and they're going to compare themselves to being rounded up or lined up and sent in cattle cars to Auschwitz?

I mean really. How could they? When the Pope was in the Hitler Youth, and the Catholic Church persecuted Jews for CENTURIES.

And do these hideous old men in dresses really think they can get away with crimes like this one?

Top Vatican officials — including the future Pope Benedict XVI — did not defrock a priest who molested as many as 200 deaf boys, even though several American bishops repeatedly warned them that failure to act on the matter could embarrass the church, according to church files newly unearthed as part of a lawsuit.

Oh boy. I wish I could enjoy what's happening to Pope Benny and his acomplices. But to be honest I can't. I feel sorry for decent Catholics. And the whole story is too sordid and horrible.

I just wish the media coverage would include a mention of Pope Benny's war on gay people. And the way him and his bishops made an oppressed minority appear like the biggest problem in the world.

Because that should have acted as a warning. A warning that these hideous old men were perverting their own religion, and had lost their moral compass.

Now that's obvious. And we should be horrified.

But if homophobia wasn't so popular, more people would have seen it coming...
Posted by Simon at 11:16 PM

Hmmmm - how do they explain men who abuse and prey on little girls?

The other disconnect in their whole "Church as Holocaust Victims" stance is that it ignores the fact that anti-semitism is about the attribution of imaginary crime to an innocent nation. Anger at the Church is based on real crime, real cover ups, real destruction of lives.

... and let's not forget, either, that historically the source of MUCH anti-semitism (and "justification" of anti-semitism) comes from the Roman Catholic Church itself.

It's like Bull Conner comparing himself to Rosa Parks!

A lot of Ratzi's attacks on queers and women have been intended to distract people from the child rape revelations that have been coming forward for years.

hi anonymous... EXACTLY. The outrageous thing is that the U.S. bshops commissioned a two million dollar study to try to prove that gays were responsible for this epidemic of abuse, and the study proved them WRONG.

Now I'm waiting for the definitive study to prove that enforced chastity can drive you CRAZY... ;)

hi Balbulican...yes of course you are right. I have to admit that when I saw the story I couldn't believe my eyes. But then these unholy sinners are so convinced of their moral superiority, they don't give a hoot about others, it's all about them...

hi 'berto...yup including the old canard that the Jews killed Christ...you know the Jewish guy... which by itself was enough to fill an ocean with blood.
Shame on those monsters. I keep hoping for the Catholic Church to rejoin the Christian church, because although I'm an atheist I know that many Catholics in North America are socially progressive.
But as long as Ratzi's gang hold sway I'm not optimisic...

hi Libhom....yes I agree with you. Going after the oppressed to deflect attention from their own crimes. Which although I'm no expert seems to me the opposite of what Jesus their founder would have done.
It really is so depressing, and these wretched bigots should be ashamed of themselves...