Are You Ready for the Culture War? 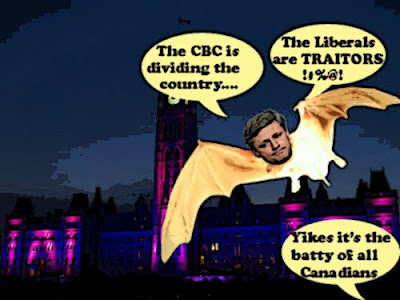 Even by the standards of Stephen Harper's Big Brother Batty government it was a surrealistic and sordid sight.

The Cons going after Frank Graves and the CBC like a pack of rabid teabaggers. Accusing them of starting a culture war.

“They [the opposition MPs on the committee] voted AGAINST a Conservative motion to require CBC executives to explain themselves for using Frank Graves, a Liberal-supporting and self-described ‘progressive’ as the network’s ‘neutral’ pollster on party politics,” the talking points say.

“By voting against this motion, they are endorsing Graves’s call for a ‘Culture War’.” At the next election, the Tories say the choice is clear between a Conservative government or a “reckless coalition” that will wage a war to divide the country.

When the only reason they are going after the CBC is because they hate Canada soooo  much. And they were the ones who started this war from the moment they came to power.

The Conservatives have been waging a non-stop political culture war of their own against "Liberals, socialists and separatists" ever since they won power in 2006, daily accusing their opponents of being anti-Semitic, anti-American, soft on crime, soft on child pornography, unpatriotic, attacking and undermining "our troops," and the list goes on.

Virtually every wedge issue in the political handbook has been pile-driven into the Canadian body politic, the impact doubled by a perpetual election campaign of attack ads to destroy, not just their opponents' policies, but their personas.

All Frank Graves did was call this assault by its proper name. And point out that it's really a clash between Canadian and Amerikan values. That we are the Canadians and they are the AmeriCons.

And of course, that if the cranky old rednecks in Alberta don't like it they should move south and vote for Sarah Palin and her teabagging scum.

By attacking Frank Graves like a bunch of  Bush bullies they have only proved his point. By putting their evil ideological agenda before the lives of poor women, they have exposed themselves as the monsters who would change our country beyond recognition.

Either we as a nation are officially casting ourselves as hypocrites in our dealings with others, since abortion is a right for all women in this country.

Or, by signalling such a position, Stephen Harper is sending a not very subtle message to his political base that a majority Conservative government in Canada would reopen the debate on a woman's right to choose in this country.

But we won't let them. Because unlike these AmeriCons we love our beautiful Canada. And we will teach these misogynistic, homophobic, religious extremists a lesson they will NEVER forget.

If these bully Cons want a culture war.

Today, I was treated to CBC's "Point of Order" where the guy in the hockey jersey, a Habs fan clinging to hope unrepentantly on tv (scott reid), was the one being patently disgusted by the Cons' decision to try and slip the anti-abortion crap in to foreign aid.

This white man sports fanatic was talking bluntly about rights of women and what was being pulled about so-called culture war. "only in canada," I thought.

But he's also a target of the Blogging Tories, so I guess he's just a Liberal minion like Graves, with no right to anything sportif.

hi Niles...well I have to admit I'm also a Habs fan clinging ...forlornly...to hope. But brace yourself, the white man sports fanatic Con is actually a member of Ottawa's gay aristocracy.
I know...first Baird now him...at the next meeting of the gay agenda I'm going to have to move a motion demanding that our admission standards be raised.... :)