Why We Could Have a Spring Election 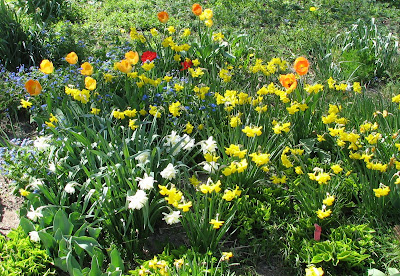 Well I see that all of the Liberal bloggerati were in a sunny mood today, cheerily dismissing any speculation that the showdown in the Commons could lead to a snap election.

So I thought I'd send them a picture of some tulips, for brightening up my day....if only for a moment. One good turn deserves another eh?

And of course if they're wrong, they can always take them to their our funerals.

Because I watched Question Period and I got the opposite impression.

“The fact of the matter is the government cannot break the law,” Mr. Harper continued, “it cannot order public servants to break the law, nor can it do anything that would unnecessarily jeopardize the safety of Canadian troops.”

And then there was the way he replied to a question from Gilles Duceppe by launching a diatribe on national unity. Which for some reason made me think of that dastardly separatist coalition.

And only confirmed my belief that if Stephen Harper can he'll go for it. Run on the economy, wrap himself in the flag.

Because now is the time to run on the economy, before higher interest rates expose its fatal weakness. And I agree with Paul Wells.

Every time the prospect of an election has increased sharply over the past four years, the Conservative poll advantage has increased. A few days’ brinksmanship is usually all it takes to put SNAP ELECTION? into a front-page Globe headline, and a distracted electorate starts to engage and polarize, and the Conservatives start to climb in the polls to the Liberals’ disadvantage.

Harper's numbers aren't a problem, not with the Liberals at twenty seven percent. The high NDP numbers might conceivably help the Cons by splitting the vote.

And above all Stephen Harper wouldn't mind a minority one little bit. Because he's only ever had a minority and a little power can go a long way.

It will be the only victory he has sought since January 2006: a chance to stay in power a while longer and make a few more decisions that will cement a broadly Conservative perspective on the way the country should be governed. A few more months during which Bev Oda, not Carolyn Bennett, will be setting the agenda for a G8 summit, and Jason Kenney, not Bob Rae, will have friends on the Rights and Democracy board, and Ken Dryden won’t be opening safe-injection sites, and so on.

Yup. If the monster can he'll go for it. He'll pretend to be as reasonable as possible right until the very last moment. And then he'll force the opposition to either table a motion of contempt.

Which is why I believe that the opposition should start hammering the Cons on the economy. Beating this drum a little louder.

Why I believe we really need to remind Canadians in the most graphic way what  the Canadian army is accused of doing in Afghanistan. So instead of wrapping himself in the flag, Great Torture Leader can mummify himself with a soiled and bloody diaper.

And why of course we need to prepare for an election, and the biggest and most brutal culture war this country has ever seen.

Because if we're not prepared to do that, and the opposition is forced to cave on a matter of such importance, we might as well tip toe crawl through those tulips.

And start singing this song...

QP told me Harper plans to wait out the 2 weeks and then go to the SCC. Don't forget Torture did happen on their watch and it is much bigger than we know. It's coming out sideways with the Brits and there is no way NATO can say they didn't know about nato countries handing over detainees. They did. Big names must be protected or it's off to the Hague eh. The Department of National Defense is trying to suppress all information about what has happened to prisoners in Afghanistan and that is (Obstruction of Justice, Section 139 of the Criminal Code of Canada). All NATO nations will circle the wagons on this to protect nato. The SCC has to accept whatever the gov'ts prefered action is. Will opposition cave or go for contempt?

I think this is getting very tricky for the clowncons, too many balls in the air. Unpredictability is the Cons achilles heel, they hate it.

Typical how Steve takes credit for our economy when it is pretty much thanks to Paul Martin who never caved into pressures to do like the U.S. and deregulate the financial industry.

Irony? If Steve did have a majority back then, given his love for all things GW Bush Americana, he would have happily deregulated everything. Therefore, we would have been in as bad a shape or worse than the U.S.

Notice how STeve never gives credit to the Liberals for this.

I may not be a Paul Martin fan, but I will give him credit where it's due.

I'm not a Martin fan, either, but I thought that was Chretien who nixed the Big Bank merger...?

hi Toe...I wonder whether the SCC would agree to hear the case. They're always been accused by the Cons of dictating to politicians. So who could blame them if they decided to screw the Cons?
But as for the Hague... considering what has been going on in Afghanistan, I wouldn't be surprised if some generals and some cabinet ministers are accused of war crimes.
They've embarrassed us so much already, but this could be the worst.
On the other hand, if they're out of power, and behind bars, what's a little embarrassment? :)

hi CK...yes he claims to be an economist, but I see no evidence of that. I think he knows as much about economics as he knows about hockey...rien...nothing... NADA.
That's the good part...he's a fraud. The bad part is we're all going to pay for it... :)

hi 'berto...I thought Martin was a capitalist tool who screwed the poor. But please don't clutter this blog up with facts. I don't... ;)