Justin Bieber and the Bullies 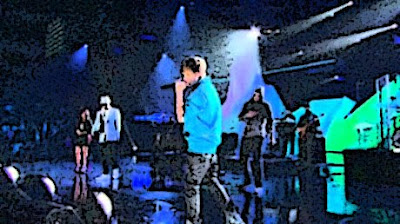 I watched the Juno awards last night and I thought it was a fabulous show.

I loved the street party in St John's, and although my favourite band Billy Talent didn't win best single, and Michael Buble is a just a little too mellow for me, I thought he was a classy winner.

“I love you from the west coast to the east, black, white, rich, poor, gay, straight, thanks for the support.”

And although I have to admit that I would probably like Justin Bieber more a lot...if I was fourteen... I think he's a talented and very together Canadian kid.

And nobody deserves this.

It's so disgusting and cowardly it almost makes me vomit. It takes a lizard's brain to be homophobic and misogynistic at the same time.

But that's why I hate bullies eh? That's why I write about them all the time even though almost nobody cares.

And that's why I love K'naan, the Somali Canadian artist who closed the show last night with a version of this song of peace, love, diversity, and RESPECT.

Because when I listen to it I believe we can change the world...

Here's to those Canadian artists who even in the dark days of the bully Harper regime are giving us something to be proud about.

Justin don't listen to the bullies.

Well, I can't stand Bieber, but it's a preference thing, not a humanity thing. I mean, really, who cares about some punk kid from youtube? But I'm not going to start spreading hate all over the net about it. :/

And you're right. This is how our country is being led, so it shouldn't be unexpected that the population's attitude follows suit. :(

I never watched the show, but did K'naan actually sing *that* version (which is really the World Cup theme song), or did he sing the original version of "Waving Flag" -- which has *fantastic* lyrics and is far superior to the bastardized version that (I assume) FIFA insisted on.

"Waving Flag" is such a great song to start with, and it has fabulous, meaningful, beautiful and memorable lyrics that are obviously heartfelt... I wish, if K'naan wanted to get the gig performing the World Cup anthem, he had just written them an entirely different song, rather than bastardize such a wonderful song.

See if you don't agree -- here is the original "Waving Flag", off his new album, Troubadour... is it not FAR superior?!

hi prin...I'm not loading Justin into my I-Pod just yet, but what I should have mentioned is that this kind of cyber-bullying is making life miserable for thousands and thousands of kids. And parents should take a closer look at what their kids are doing. When I read some of the comments on YouTube I practically lose my faith in humanity. And yes, that's why I hate the Cons so much.
I hate their reactionary policies of course. But what really turns my stomach is how they brought bullying into our Parliament, and coarsened our country.
And of course, that's why I am determined to teach them a lesson... :)

hi 'berto...I'm sure he did the Troubadour version, and you're right the lyrics are better than the one on the Coke song.
But I love the energy at that concert, and it was in my favourites, so I ran that one instead.
I have to say I love that guy so much I have THREE versions of Wavin' Flag in my i-pod...including the one for Haiti.
And I paid for ALL of them... ;)