The Homophobia Bus and the Gay Boy's Life

I just found out that a Christianist group has decided to pull this billboard off the sides of buses in Toronto.

A large, electric-blue banner featuring an oddly tattooed youth and the question: “Does God care if I'm gay?” has been voluntarily removed by the Christian group behind the campaign after a flood of public complaints

Which is just as well eh? Because one...I'd hate to have to walk to work in the rain. But I'd rather do that than ride on a homophobia bus, and besides my mum told me never to trust a guy with tattoos on his neck. Scary.

Two...I don't care what any imaginary Big Baboona has to say about me...

Because if anyone wrote that nonsense today they'd give them anti-depressants. And tell them NO they can't bring their goats into the house... or keep their wives in the barn.

Or cover up child abuse.

Which reminds me.... if I had my own bus. And I could put what I want on the side of it.

This would be my message... 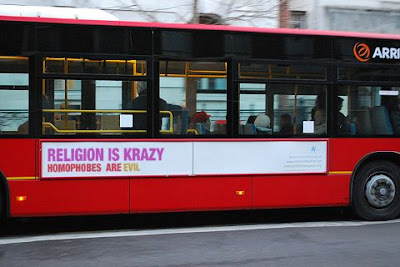 Because the truth will set us free eh?

And if the bigots think their Big Baboona should worry about us instead of their churchy perverts, they're not just krazy, they're EVIL.

Because we choose life over death, love over hate. 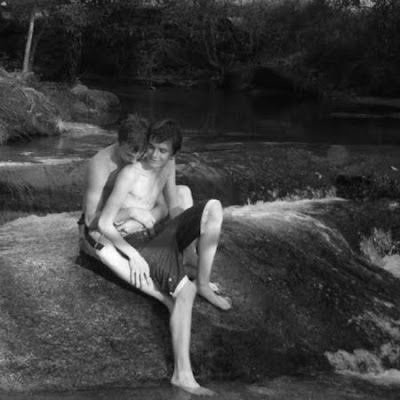 Because when you're gay, free and proud.

A gay boy's life is a wonderful thing.

And even in a frozen land.

P.S. Jonsi is an Icelandic artist who sings in English so his American boyfriend can understand what he says. Because when I say we are warriors of love, and so much better than the bigots, I really mean it.
Posted by Simon at 4:37 AM

I stumbled upon your blog a while ago and thought your take on politics was a unique perspective, but man, lately, it's like you're just fighting hate with hate, and as a Christian who supports gay rights, it just burns me from both sides.

Sorry but I'm not a gay-hating molesting-priest-forgiver, and yet, as a Christian, you've painted me into that category and it just creates a resentment in me that I know is not your goal here.

Oh, but thanks for that bus thing. I meandered over there just for fun and decided to give them a hard time about their bullshit. ;)

hi prin...There is always a danger when you fight bullies that you could end up as bad as they are. I'm aware of that and try to restrain my anger, and my impulsiveness. And not to be TOO rude to people, however awful I think they are. However, when you're blogging at four in the morning after a long and fun Saturday night,and an exhausting week that's not always possible. ;)
Seriously though... although I am an atheist and do consider "God" religion absurd and annoying, because it distracts from what we have to do to make our heaven right here on earth, I do respect the views of religious people, I understand that religion can ease the pain and the fear of dying. And I have made numerous references to the fact that I know that there are many decent Christians out there. One of them who happens to be my mother.
My argument is with those religious extremists who would single out a persecuted minority like gay people, and try to make their lives hell. And spend far too much time HATING instead of LOVING.
That obviously doesn't include you, so if I made you feel that way I'm sorry.
On the other hand you should also take into consideration that I am naturally cheeky...I just can't help it. It was very late at night. And I needed a good excuse to run the Jonsi video... :)

Simon,
Why do you hate so much other homosexuals who disguise themselves as a priests in order to teach young altar boys fine points of faggotry? Your flaming hate of the church and homosexuals that are hiding in it causes that your homo brothers in the church hate you back and they pull out Bible and preach for your demise.