The Lesbians, the Comedian, and the Lynch Mob 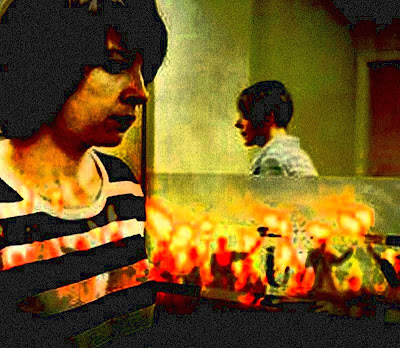 I've avoided writing anything about the lesbians and the comedian story, because I wasn't sure what really happened in that dreadful dive on that fateful night. Except that it was ugly.

Too bad the Con monkeys in the MSM couldn't show the same restraint. Because they've been falling over themselves in a freakin' foaming frenzy, lynching the lesbians, siding with the comedian, hysterically declaring it a matter of free speech, or using the case to demand that the Human Rights Commission be abolished.

Which is absolutely outrageous. Because if this is what happened...

Under questioning from her counsel Devyn Cousineau, Pardy said she went to the restaurant to meet two female friends including her partner Zoe Broomsgrove. They were sitting in the patio and at 11:30 p.m. were told they had to move into the restaurant as the patio was closing.

Inside Zesty's they were being seated when Broomsgrove kissed Pardy on the cheek, which caused Earle who was on stage to point to them and tell the audience they were sitting at the "dyke table."

What then followed was a diatribe of vile remarks from Earle describing lesbian acts involving her and her partner that shocked and embarrassed her, she said.

It has nothing to do with free speech, and everything to do with ugly BEHAVIOUR. Guy Earle says the women heckled him first. But why would they heckle him when they were being seated? I think it far more likely that he was bothered by the sight of one woman kissing the other, and that's why he launched his disgusting homophobic assault.

Because some people are sick.

And because it's one thing to attack people on the internet, and I'm in favour of loosening restrictions on that. But to personally attack people for who they are in this manner:

And humiliate them in front of others, and end up breaking a pair of their glasses, is simply inexcusable. Even in a restaurant/comedy club.

And attacking members of an oppressed minority like lesbians is particularly disgusting. Because would Guy Earle have told a group of black people they were sitting at the "nigger" table? I doubt it.

And doesn't that foulmouthed no talent loser know that hate crimes against gay people in this country are particularly violent?

As a result, incidents motivated by sexual orientation were more likely than other types of hate crime incidents to result in physical injury to victims.

So insulting them and humiliating them in public doesn't make you a free speech martyr, just a bigot bully and a COWARD.

Like many others I wish this case could have been quietly resolved by mediation. But let me be very clear about some things.

The Human Rights Commissions exist for a reason. Free speech in this country is NOT threatened.The so-called Free Speech debate in this country is all about having the right to threaten and denigrate minorities. Instead of challenging the powerful. Which makes it PATHETIC.

Lorna Pardy had every right to complain about the way she and her friends were treated.

Lesbians don't lead the Gay Pride parade for nothing.

If they bash us, we will bash back.

Their hate, our LIVES... 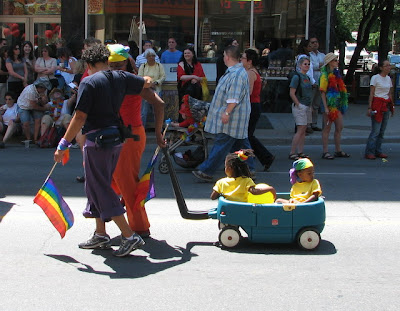 I refrained from posting anything to, because i don't know what happened.

But it's true, there's a reason comedians don't say n***er anymore and it's time that slurs against gays, lesbians, bisexuals, stopped being seen as funny as well.

hi thwap...I don't mind people poking fun at gay and lesbians, because like any other community we've got some things we can all laugh about.
What I object to is insulting people in such a gross, aggressive and unfunny manner in front of others, just because one women kissed another.
And what shocked me even more was that the media was portraying this as some free speech issue, when it wasn't.
It was just an asshole making an asshole out of himself in public.
At least that's the impression I got from this video...

hi Oemissions...you're probably right. Maybe until gays and lesbians are treated better by society, we should leave the jokes for gay comedians.
Although you know my straight friends manage to make fun of me and my fabulous gayness without ever hurting me or offending me. So although I wish they would just be stunned into respectful silence by my fabulosity, it can be done... :)