Stephen Harper and the House of Pain 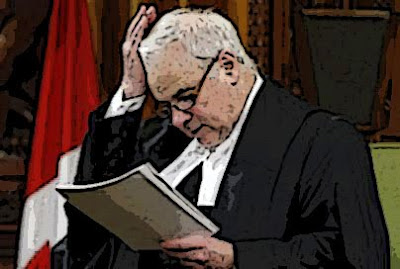 It was simple, clear, and so wonderfully Canadian.

A firm but gentle reminder that Parliament can't be stepped on. And a call for compromise.

A great decision from a decent and brave man.

Mr. Milliken can now look forward to a taste of the conservative anger machine that seemed to paralyze our Governor-General a year and a half ago. What will be said of our nation's Speaker on the openmouthsphere in the days to come? Not a Canadian? Tool of the separatists? Wants the terrorists to win? A crypto-socialist? Must be from Toronto?

It was also one of the most significant decisions in Canadian Parliamentary history, and Stephen Harper wasn't even there to hear it. Can you believe that? Talk about CONTEMPT.

No doubt he was watching it in his office, surrounded by his thuggish Con henchmen, swearing like a mob boss, and plotting his next move.

Because let's not kid ourselves, the danger of a snap election is still very real.

And let's never forget the kind of political monster we are dealing with. A power hungry  ideologue desperate to implement his RepubliCon agenda, and change Canada beyond recognition.

A sinister religious fanatic who would put his extremist beliefs and those of his rabid base before the lives of poor women.

Even when pushing a proposal to save lives among those living in wretched faraway conditions as his signature accomplishment, Harper has found a way to set his government apart from the opposition parties

Given that he’s never seen parliamentary harmony he couldn’t inflame into political divisions, perhaps poisoning this motherhood initiative will end up a fitting Stephen Harper legacy after all.

The legacy of a twisted, tortured man who will do ANYTHING to smear his opponents.

Once he called Richard Colvin a Taliban dupe. Today his thugs are going after Frank Graves and the CBC.

Tomorrow he'll be going after the Speaker... 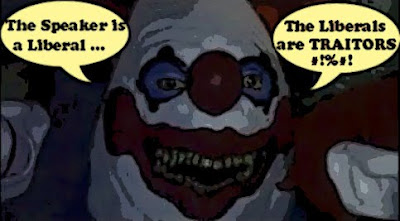 Oh yeah. The danger is very real. The next two weeks could determine the future of this country.

Organize, unite, prepare to attack Stephen Harper and his evil RepubliCons harder than ever. Because they are preparing to launch the greatest assault on our Parliamentary system this country has ever seen.

The culture war that some Canadians don't believe is happening, because as Doyle says they're too polite or something, is about to EXPLODE.

And two burning questions demand to be answered. Or scrawled on every wall in Canada.

How can such a loathsome regime call itself a Canadian government?

And what is the monster HIDING?

Harper can't do very much during the next fortnight because anything perceived as hostile to the speaker would have all the parties up in arms and reminding Harper of his non-supremacy.
His words and actions have come back now and have hamstrung him for 2 weeks.

He had better keep his temper in check and learn to be civil in his repsonses in Question Period. In other words, the supremacy of Parliament is forcing him to learn to be its servant--a lesson he should have learned long ago.

He's often claimed that Parliament's not working. Actually, it was his obstructionism that was causing the "non working" bit. That, plus the obstructions created in the committees where Conservatives would talk out the clock or introduce so many points of order as to consume the entire meeting.
-----
This nation has worked fine for nearly 150 years and the decline in the parliamentary system can be attributed to the right-wing reformers and new-age conservatives who have this huge attitude of "entitlement".
Please, someone, bring back the days of DECENT Conservatives like Stanfield and Diefenbaker and Joe Clark.

This present lot is a lot of old cobblers and someone should ring round for the dustmen to collect them at the kerb and take them off to the knacker's yard.

It'll be funny to see Harper look chastened for a fortnight. Either that or he will be very invisible during that time. The less the better.

Perhaps he'll prorogue again. It's what he does best,after all...

Love how many conservative bloggers are all paranoid about leaving documents with the opposition and now our national security and safety has been compromised. It's predictable.

They are still using that how the Taliban threw acid in girls' faces bit, so we shouldn't get worked up over them. F$%ck international laws, in their minds.

I absolutely agree with Simon. Unfortunately, the best predictor of future behaviour is that person's past behaviour. Harper has, again & again, attacked, demonized, condemned & blamed everyone & anyone else in order to avoid behaving like a Canadian, a parliamentarian, or a human being. Not only will he attack Milliken, but he will provide some Shiny Thing to distract the populace from this issue. Already we have heard that the documents have suddenly been found to be "lost" in "sea containers" somewhere & will take "YEARS" (I quote) to find & sort. Harper slips, slides, & evades, over & over, & it works for him again & again. He's like some indestructible evil Joker figure. I think, Torontonian, that you are pretty optimistic, given who we're dealing with. Wait for "the shiny thing"!

Stephen Harper and the Conservatives are embarrassing Canada on an international scale. His party's unilateral actions upon issues such as the G8 maternal mortality funding process and the Copenhagen Summit have left Canada and Canadians out of our traditional role in the world as leaders for peacebuilding and social advancement.

Stephen Harper is forgetting the roots of our current governmental system of constitutional monarchy. Our PM is beginning to look more and more like Charles I of England, with a heavily religious agenda and defying both the will of the little people and their desire for a Parliament that represents them all without prejudice. Charles I was another famous proroguer of Parliament, and used the proroguing for much the same purpose - to willfully obstruct the workings and processes of Parliament.

hi Torontonian...I think you are being too optimistic. Harper will not be the servant of Parliament, and I truly believe the detainee issue could give him the excuse to go for an election, and make it look like it isn't his fault. He's trying to fix the economy, while the opposition just wants to coddle the Taliban etc etc.
Your position is of course the reasonable and Canadian one, but Harper isn't neither. In the end he may not go for an election, but it won't be for the lack of wanting...

hi CK...yes that old boogy man national security will be hoisted aloft again.
My fear is that in a country that's growing increasingly militaristic it just might work.
Especially when coupled with a sunny Spring, the sweet smell of the BBQ, and the apparent bubbly state of the Canadian economy.
Trust me, we may not get an election but Stephen Harper is looking for one.
And we better be ready...

"Your position is of course the reasonable and Canadian one, but Harper isn't neither" . . . .

That's my point. I'm Canadian and Harper isn't. He won't become a Canadian in his damaged psyche now or ever.

That's all the more reason to get rid of him and his ilk as quickly as possible.

hi CanNurse...I agree with you completely, and I love the Evil Joker. Just not the indestructible part. Because we'll see about that. The problem with Torontonian's take,as I told him, is that he's too decent and reasonable, and Harper is a MANIAC.
The good news is that if the opposition plays its cards right, and doesn't fold like a cheap suit, I believe we can beat the monster at his own game, and make him pay for it.
And besides... I thought the Washington Capitals we're going to KILL my beloved Canadiens. But we won !!!! And if the Habs can beat the Caps,we can KILL the Cons... :)

hi CanadianDream...I completely agree with you. One of the most distressing aspects of this Harper regime is the way it has trashed our reputation abroad. I visit Europe frequently so I know what some are saying about us. And it's not pretty. The damage to our reputation built up by so many good people,will take years to repair.And whether most Canadians care or not, I think it's a tragedy.

Now about this other matter....

Our PM is beginning to look more and more like Charles I of England, with a heavily religious agenda and defying both the will of the little people and their desire for a Parliament that represents them all without prejudice.

Please don't raise my hopes, I'd HATE to be disappointed... :)

Simon wrote: "if the opposition plays its cards right, and doesn't fold like a cheap suit"

Ummm... have you SEEN the opposition parties, lately?! All bluster and bombast, and very little follow-through.

Grumble, grumble... I wish I could vote for Duceppe!