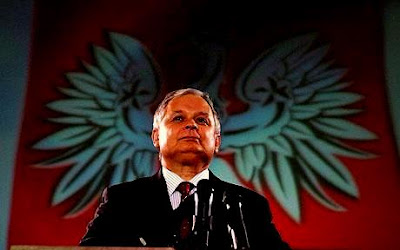 I see they buried the late Polish President Lech Kaczynski in a place usually reserved for Poland's heroes. And I'm glad that at least there was SOME controversy

Not everyone is proud of the decision taken by the Catholic Church and the late president's family.

Some 40,000 people have signed up to a Facebook group opposing the idea.

Others have started a group called "Yes to burying the president in the Great Pyramid of Egypt".

Because although some really good people died in that tragic plane crash, like Izabela Jaruga-Nowacka.

Lech Kaczynski was not a hero, he was a xenophobe and a  bigot .

Speaking to an audience at Dublin Castle on the final day of his three day visit, Lech Kaczynski said that the promotion of homosexuality would lead to the eventual destruction of the human race.

When serving as mayor of Warsaw, he attempted to ban Gay Pride marches in 2004 and 2005.

He refused to meet with the parade organisers, saying, "I am not willing to meet perverts."

Which makes me wonder what Stephen Harper was talking about when he said this the other day:

“President Lech Kaczynski was a man who stood proudly and defiantly for democracy and human rights through even the most difficult times."

But I guess Harper would wouldn't he? Because for him and the theocratic homophobes in his ReformCon party, gays aren't really human and don't deserve any rights. And he's our Kaczynski.

You know I hate to say bad things about the dead. But people are always rewriting our history, or burying it, or making heroes out of monsters. And the truth is the truth and enough is enough.

I had a Polish sausage the other day at the ball game... 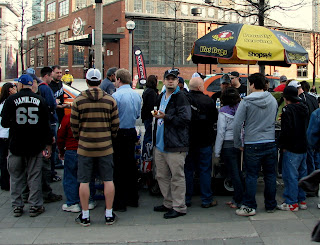 I told the sausage man to stick a fork in it... to make sure it was well and truly done.

A Very good and timely post...especially when Kaczynski gets a hero's burial.

People tend to forget about much of the bad and the ugly upon death.

Ah, do I sense someone who is anti-Polonic? Of all the countries around the world, you have to pick on Poland. You don't know how well gays and lesbians have it in Poland compared to a neighbouring country such as Belarus.

Where have I heard the above arguments before? The Middle East?

As for Kaczynski being buried at the castle in Krakow, many Poles did not like his political views. However, he was Polish. He was a homophobe just like the former kings of Poland. If Kaczynski could not be buried at the castle, then practically all of the Polish kings would need to be disinterred because of their views.

@ Skinny Dipper: You wrote: "He was a homophobe just like the former kings of Poland."

I seem to recall reading somewhere (but of course I can't find the citation on my hard drive right now) that -- surprisingly enough -- Poland is the *one* European country in which homosexuality has never been illegal. And that furthermore, one of the past kings of Poland was not only gay, but openly so!

I know, I know -- it surprised the hell outta ME, too!

That said, Poland today is distressingly homophobic, I grant you. I place a LOT of the blame for that on the Roman Catholic Church, though.

I'm not sure where you're coming from, SD.

It seems to me, MS is merely stating PM Lech is not the martyred defender of human rights that his hagiographers are painting into his icon. It has nothing to do with Poland per se, but exaltation of celebrity dead.

And the argument about the man being buried amid ancient royalty, aside from not being MS's queer activist wish, but a debate in Poland itself between Poles, about a Polish pol, seems to hinge on the idea is it wise to equate an elected leader with dynastic rulers having a whiff of divine power to them? That would make me leery. That said, the British have Westminster and other sanctuaries chock full of deceased celebrities amid the royals.

MS seems to be stating he doesn't want blunt exclusionist history revised to suit a beatification narrative. I don't blame him. As the new bill by Bruinooge "Roxanne's Law" points out, martyrs, intended or otherwise, are often exploited by third parties for future political stances.

Given the strength of the Catholic Church in Poland, recent accusations by leading cardinals about homosexuality and a very upset country worried about its political stability, I'd hate to see things go extremely conservative in Poland. Sanity knows efforts to drag us that way in this country haven't done us any benefit on any front.

hi CK...I didn't really want to write this post, because as I said I don't like speaking badly of the dead. And it was a horrible tragedy. But when I saw all the adulation Kaczynski was receiving I thought I should point some hard truths out...

hi Skinny Dipper...I am not anti anyone based on the country they come from. I'm anti-bigot period. And Kaczynski WAS a bigot. He not only banned gay pride parades, he staged a "normality parade" and criticized the police for protecting gay demonstrators from skinhead mobs that attacked them.
Izabela Jaruga Nowacka was my kind of hero, Lech Kaczynski wasn't, and burying him in the castle only debases the real Polish heroes buried there.
The good news is that Poland is becoming a more tolerant place, but no thanks to the Catholic Church or the bigot.
Finally, the kings may have been homophobes but this is the 21st Century so I expect things to be different.

hi 'berto...that's interesting. And you're right the Catholic Church is the source of homophobia and anti-semitism.
Skinny Dipper may think I'm anti-Polonic, but he couldn't be more wrong.
My grandfather trained with a group of Polish flyers in Britain during the Second World War so I only heard good things about them.
And besides how can he call me a racist when I love Polonic sausages? !!!! :)

hi Niles...thank you for making my position clear. I hate it when emotion clouds people's judgements, and I insist on the full measure of the man.
It may be unpopular to say what others won't say because they don't want to swim against the tide.
But that comes naturally to me and I would like to assure anyone who reads this blog that I NEVER intend to change...

speaking of homophobia...
did you see the reaction in the House on tuesday when our FM said "queer" see Baird's face.
http://www.youtube.com/watch?v=jC6fyva9bSs

LOL -- that was hiLARious, Oemissions! :D

You have to know that, as many other people, he was not a homphobe. He wasn't afraid of fags becaus, you know, that is what phobia means.

Besides - homosexuals are a minority so the only problem with it is that they're trying to force their nature as something normal.
Guess what - it is not.
And thanks to homsexuals we had a pedophile party. I'm not saying that homosexuals are pedo - that would be a lie but thanks to their war it is possible for other minorities to gain some attention because of their sexuality.
And that, my friends, is wrong.