Harper's Boyfriend and the Gay Agenda 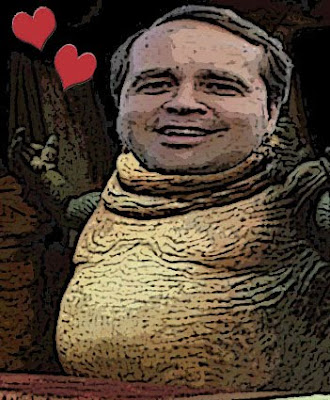 Uh oh. I see the absurd Christianist bigot Charles McVety is foaming like a rabid hippo jabba, and going on about the "gay agenda." Again.

"Christian right leader Charles McVety, who is also part of the coalition, said it is unconscionable to teach children as young as eight years old gender identity and sexual orientation. He accused the Premier of listening to 'special interest groups with an agenda,' including former education minister Kathleen Wynne, who is openly gay. "

And I think that Robert Silver has some very good questions for Tim Hudak, the Ontario Con Leader:

1. Does he see homosexuals in Ontario as a "special interest group with an agenda"?
2. If yes, what exactly is that agenda?

Now I just wish somebody would ask Stephen Harper why a wingnut bigot like McVety gets to spend sooooo much time whispering into his ear. I mean they're practically boyfriends.

McVety believes that saving the planet is a satanic plot that could delay the return of The Messiah. He doesn't believe Israel should ever be criticized for the same reason, which sounds strangely familiar. Remember what happened to Rights and Democracy.

He helped destroy the national daycare program because he believes women should be subordinate. He got Stephen Harper to demote Diane Ablonczy, one of his most faithful supporters, for funding the Gay Pride parade.

And the most frightening thing is that Harpo and him are just soooo close. Garth Turner says McVety once boasted he could get Great Boyfriend Leader on the phone in less than two minutes.

And there was his little hoggy group the other day having yet another cozy intimate chat in the PMO.

Yes believe it or not, the Prime Minister of Canada meeting with McVety's Canada Family Action group that puts out this kind of homophobic garbage.

Just a few days before the government announced it would not be funding abortions for poor women...even if it killed them.

Golly.  The Cons say Harper's office is PADLOCKED, but who gave the bigot jabba the key?  And who is REALLY running Canada?

You know I think Canadians should be asking a lot more questions about the Theocratic Agenda because that's the one that is killing Canada. And the one that  could KILL the Cons.

As for the "Gay Agenda," if anyone finds it please let me know.

Because I don't believe it exists.

But then I could be mistaken...

I've seen McVety on the news in the last few days and every interview was from Queen's Park.
McVety's offices are in Don Mills.
Why is McVety spending so much time at QP?

Could he be LOBBYING?

Is he a registered lobbyist? Has he paid his dues and registered as a lobbyist? Or does he prowl the halls and make "courtesy calls" on various persons.

We should be told but can we trust McVety to tell the truth?

I rather think not.

McVety believes that saving the planet is a satanic plot that could delay the return of The Messiah.

I knew he was a total whack job, but that above statement? Oh wow!

I bet his crush was the late Tammy-Faye Baker

hi Torontonian...I don't know what McVety is up to all I know is that he is popping up everywhere these days.
Floating like a blimp over the Ontario Legislature, hobnobbing with Harper in the PMO, and I wish more Canadians knew more about his track record.
He should be a registered lobbyist but I think he's acting like the unofficial chaplin of the PMO, and that's the absolute limit...

For Charles McVety, any mention of the environmental movement sparks a tirade against the 1992 Earth Summit in Rio de Janeiro. "The Bible talks about a false religion and one-world government, and what we have developed is exactly that," McVety rages. "The false religion is the worship of Mother Earth — I call them earthies!" He dismisses Rio's Earth Charter as "that pagan document."

People should read that article again because it explains a lot of things that are going on now. Particularly the Christian Right's strange relationship with Israel.

P.S. The good news is that Marci McDonald's new book on the Christian Right will be out in a few days.
And I expect the theocons in the PMO are trembling at the thought of what will be in it... :)

Seems to me if anyone has an "agenda" it is McVety and his nasty cohorts. It is really frightening that he seems to have so much influence with Harpie.

hi Alison...yes McVety and his friends do have an agenda and it's growing like an alien pod in the PMO greenhouse.
And McVety does seem to have a special place in it. Don't forget the day Jim Flaherty brought down his first budget McVety was his special guest in Parliament.
This theocon conspiracy is out there in plain view, and the really scary thing is that most people can't see it...